Qatar armada in for a podium finish in Mexico 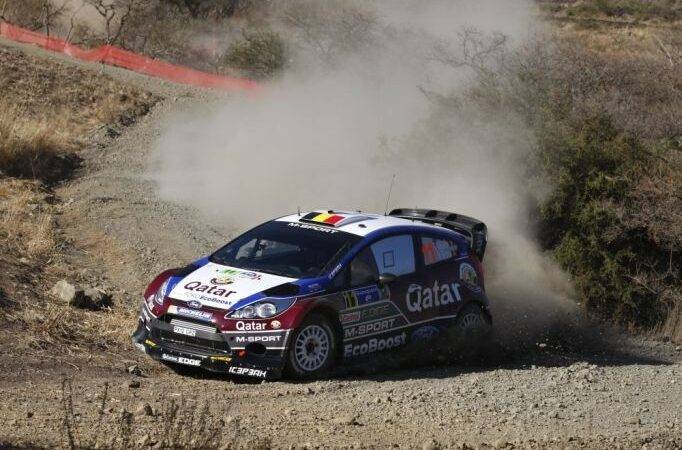 Biggest retirement of the day happened right between the first two stages, when Mads Ostberg reported alternator malfunction and was forced to give up his second place. In bitter disgust he kicked the car and got himself slightly injured. Good thing is, injury is nothing more than a sore battle scar, so Mads should be able to continue in Rally 2 on final day.

Ostberg’s exit promoted Thierry Neuville to third place. Belgian driver got another unexpected present when late puncture proved very costly for Mikko Hirvonen – Finn lost almost all of his advantage, and going into final day there is only 7.5 seconds between the two. Even though Neuville was not keen to announce all out attack for Sunday, I don’t think he will be giving up without at least trying to push Hirvonen over the final special stages.

Thierry Neuville (3rd) said:
“Obviously I am disappointed for Mads [Østberg] because he was doing really well, but this is rallying and sometimes these things happen. We are now in a podium position and we should try to continue like this and make sure we finish in third if not even higher! Maybe if things go our way we can push Mikko [Hirvonen] all the way to the finish. But honestly, if I finish on the podium – whether it be in second or in third position – I will be very happy.”

Nasser Al-Attiyah (5th) said:
“I am really happy with the performance today. Tomorrow will be another day and another story, but we will try to push and bring home this good result on out first time here with the [Ford] Fiesta [RS WRC]. We’ll try to manage the long stage without any problems and regardless of whether we finish fourth or fifth it’s a great result for us. Thierry [Neuville] has been fantastic today. It’s very important for him because last year he showed the speed, and this year we have tried to help him maintain the speed but make it to the end of the rally. I feel very sorry for Mads [Østberg] because he has had a very good rally so far and today’s retirement was not through his mistake. But these things happen and I hope he can come back strongly tomorrow and win three points in the Power Stage.”

Evgeny Novikov (10th) said:
“Today has not been so easy running first on the road because we have had to do a lot of cleaning and, especially on the first pass, there are no lines to follow. But this is how it is and we just need to ensure we get to end to salvage some points for the team. We’re back in the top-ten now which is a positive, and with the long stage tomorrow [Guanajuatito – SS21] there is still a lot that can happen.”

Mads Østberg (Rally 2) said:
“The clutch didn’t feel quite right off the start line, but we didn’t realise that there was a problem until we got into the more technical part of the stage. You need to use the clutch on hairpins, and when I pushed it to the floor, nothing happened. It was a bit of an inconvenience, but we were in a strong second position and that wasn’t going to be us out of the rally. But then on the road section to SS15 we had a warning on the dash and five minutes later, that was it. It was an electrical problem and we had no power going to the engine. It was just one small problem, but sometimes it’s the same ones that can have the biggest impact. Obviously this is very disappointing for us. We were taking time out of Mikko [Hirvonen] and on target for a good result – not only in the rally but in the championship too. There are still a lot of positives to take from the event and I think we proved that we are capable of setting a very good pace. It’s just frustrating and you need to let yourself feel the disappointment before you clear your head and start again.”