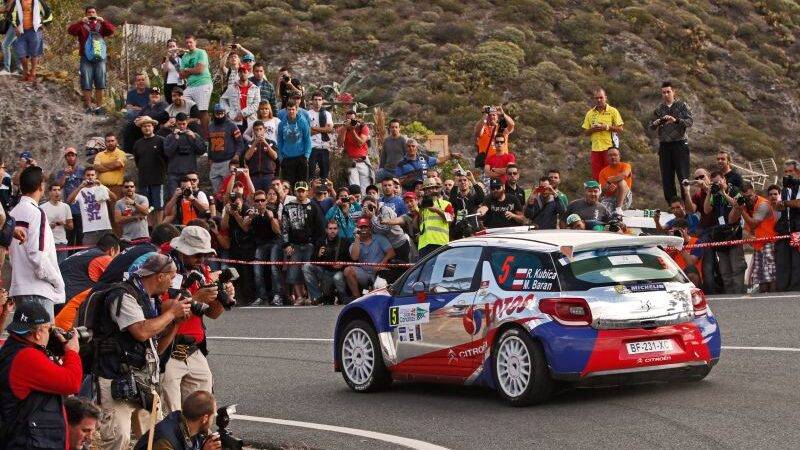 He says he is here mainly to have fun, to learn and get more familiar with the car and pace notes, but at the same time, he is also here to prove a point or two. First, he is back and competing in a major motor sport series – or rather, two of them, since he will be dashing around the stages of both European and World Rally Championships. Another point to prove is that he hasn’t lost any of the talent and the instinct for speed, even if both will, most likely, require some time to fully adapt to specifics of rally as a discipline.

Thursday was a shakedown day in Gran Canaria, and in the end it was Kubica at the top of the score board, with 0.6 seconds advantage over Czech pilot Jan Kopecky in his trusty Škoda Fabia S2000. Kubica drove his specially prepared Citroën DS3 RRC in stunning, shiny Lotos livery.

Another promising scorer, albeit on a short 2.5-kilometer stage, was Craig Breen in Peugeot 207 S2000. He was fourth overall, 1.5 seconds slower than Kopecky and local ex-winner Luis Monzon, who set the equal time as Czech ace.

This is what Kubica had to say about today’s shakedown: “Shakedown doesn’t matter but it was important to get some time in the car and have some more information following our short test here on Monday. We need to work quite a lot still but generally everything has been good for us so far.”

“We are losing downforce so we have to keep working with the set-up so I am confident with the car and really show what the car will do. They are fast stages with some very narrow parts and there is no margin for a mistake.”

ERC rally radio returns to action tomorrow for extensive coverage of Rally Islas Canarias, with Chris Rawes, Julian Porter and Greg Strange behind the microphones. On top of that, Eurosport Events already is firing from all cylinders on all imaginable social networks and platforms, with lots and lots of news, videos, photographs…

To round it up, here is Eurosport TV schedule for Rally Islas Canarias:

All timings are CET