Podium places for Renault Sport in the Canaries 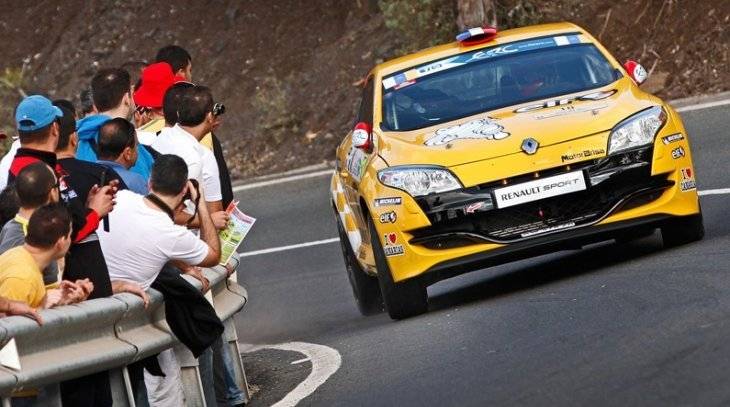 The third leg of the European Rally Championship, the Rally Islas Canarias ‘El Corte Inglés’ took place in changeable weather conditions, though that did not stop the Renault Sport Technologies team from scoring maximum points in the Production Cup and moving straight to the top of the team standings. Fifth in the final race classification and first in the 2WD class, Germain Bonnefis and Olivier Fournier were particularly impressive in showing just what the Megane R.S. N4 can do on asphalt.

Though the shakedown took place in bright sunshine, the roads were wet by the time the Renault Sport drivers began the event, the island’s terrain and unpredictable weather influencing their early decisions.

“Making the right tyre choice wasn’t easy,” explained Robert Consani. “The service park was right by the sea, while the specials were held in the mountains in the middle of the island, at very high altitudes and with quite a few slopes involved too. The conditions changed from one moment to the next and it was hard to predict what the weather was going to do.”

Setting off on wets, Robert Consani made an ideal start nonetheless and slotted into second place in the Production Cup behind Andreas Aigner and his four-wheel drive car. Germain Bonnefis made the most of the drying roads, finding more grip and gradually picking up the pace.

“I’m happy I was able to acclimatise quickly because I’ve got a lot to learn,” said the reigning French Dirt Rally champion. “I haven’t driven on asphalt in a long time and it was also my first rally in the Megane R.S. N4 and only my second outside France. Everything was unfamiliar and it was all a little disorienting.”

As Friday afternoon unfolded and the roads dried, Robert Consani began to struggle on his wet tyres and eventually relinquished second place in the category to his team-mate.

The following day both Renault Sport drivers matched Andreas Aigner for pace without being able to bridge the gap the Austrian had opened up on leg one. Second and third in their class, the Megane R.S. N4s were also gaining ground fast in the general classification.

Robert Consani suffered two punctures in the day’s final stage and though he slipped down another place in the overall standings, his troubles did not preventing him from stepping up on the Production Cup podium behind Germain Bonnefis.

Fifth overall, the Aveyron driver caught the eye by keeping pace with the frontrunners throughout: “I’m very happy with this result because we went to great lengths to understand how the car was performing on what is unique terrain and in difficult conditions. We made progress all the way through the rally and, for our first time out, it’s very encouraging.”

“It’s mission accomplished,” added Robert Consani. “We lost time running on wet tyres in the dry on Friday. After that we were in a position to attack and we even managed to post some faster times than Aigner, though it was impossible to reel him in. I was pleasantly surprised by Germain’s performances, and the rivalry between makes us want to go out and do even better the next time.”

Thanks to both drivers’ efforts, Renault Sport Technologies took an early lead in the Production Team Cup standings. The next event on the team’s schedule is the Tour de Corse on 16-18 May.