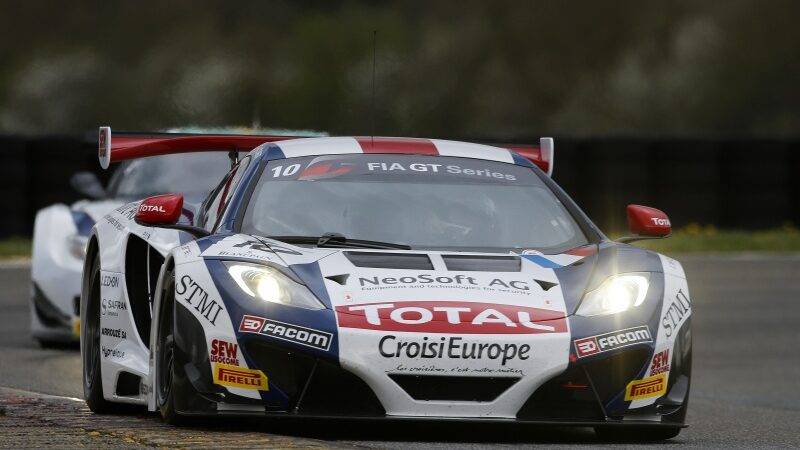 Great team effort saw Alvaro Parente and Sebastien Loeb clinch victory in first qualifying race of the new FIA GT Series season. On tight and twisty Nogaro circuit Parente did a great stint, but was unable to find a way past the leading Audi R8 ALMS, driven by Rene Rast. After the mandatory pit stops, Loeb took the wheel of Sebastien Loeb Racing McLaren MP4-12C GT3 and after several unsuccessful attempts finally pulled out a trick to outsmart Niki Mayr-Melnhof in the Audi. Loeb was able to move ahead to take the win in his first GT Series race.

“Alvaro did a great job, he put the car in second place and was pushing hard. Pitstop was executed perfectly, and I was able to close in on Niki. He fought very hard, I really needed to think, he was very intelligent in his moves. One attempt I did worked and we were able to get in front.”

“This is just one race, we still need to work, that’s the main thing. It’s just one race, and it would be silly to think it will always be like this. Tomorrow is another race, we need to keep the pace. For now, I am very happy for the team and for myself, great day”, exclaimed happy nine-times World Rally Champion turned GT/Pikes Peak/who-knows-what-else racer, Sebastien Loeb.

I am aware this is not strictly rally related, but hey, it motor sports, and it was also live on TV / Internet, so it made my Sunday. Now, if only I could find a reliable, pirated of course, stream to watch BTCC races! Not to mention European RallyCross Championship, which also ran it’s first races today.

Sebastien Loeb and his racing team will be back in action tomorrow, you can watch the race live again by visiting www.fiagtseries.com or you can also use this link with embedded stream.