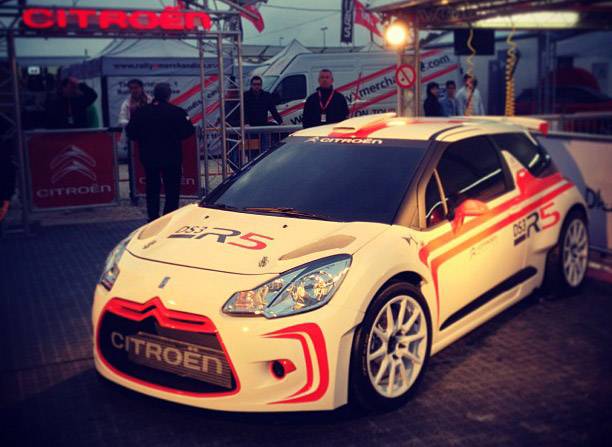 First round of Citroën Top Driver series begins in few days, and the excitement surrounding this interesting new concept is rising. Today, Citroën Racing unveiled the car – DS3 in R5 guise, and she’s a beauty. Of course, needless to say, she also kicks ass on stages, Citroën style.

Couple of days ago, Citroën Racing presented it’s Top Driver series and it’s nine crews. First test will also be a big one – none other than Rally de Portugal! With all it’s challenges and notoriously tough stages, if weather decides to take part.

On the other hand, Citroën Top Driver series crews are no strangers to rallying, as you can see in the press release below. Many of these names are regulars on the international rally scene, and this is the perfect way for them to gain valuable experience, competing on the very same events as the leading WRC crews.

Best of luck to Citroën Racing and to the nine crews, it will be interesting to see who will be victorious at the end of the season!

The waiting is almost over: the Citroën Top Driver series kicks off at round four of the World Rally Championship, the 47th running of Rally de Portugal. Set up by Citroën, the formula will see nine crews competing in the Algarve. These nine drivers will be doing battle in their DS3 R3s at this, the opening event of the season, with one goal in mind: win the title and with it, secure a seat in a DS3 R5 for six rallies in the 2014 WRC2. A mouth-watering prize, likely to deliver an exciting, closely-contested season.

Like the sport’s top flight category, drivers will compete against one another on a mix of surfaces, mainly on gravel and at some very specific events. Whether it be the famous jumps in Finland, the winding roads through the vineyards of Alsace or the muddy stages in the Welsh forests, each rally has its own characteristics and difficulties. These top-level events will provide the competitors with the perfect stage to show off their talents over the course of the series. They will all be driving a DS3 R3, which has already enjoyed huge success in national and international rallies and is the benchmark in its category.

For the first round, drivers competing in Portugal will have to tackle 387 kilometres of timed stages, on a fast and technical course, where weather conditions can often be difficult. On Friday, after two runs on Mú and Ourique, the DS3 R3s will head to Lisbon for the super special stage: a 665-kilometre round trip with no service period, and for which tyre choice may prove decisive. Saturday and Sunday’s legs are more conventional but the 52-kilometre Almodovar stage, run twice on the final day, is highly likely to prove decisive in determining the outcome of the rally.

In any event, it is difficult to pick out a clear favourite given the quality of the field entered in the Citroën Top Driver; each driver will feel he has a good chance of being in the leading group. The field features drivers with a good competitive record (like Bryan Bouffier), experienced drivers (like Francesco Parli) and winners of a national Citroën Racing Trophy (like Keith Cronin and Quentin Gilbert) as well as promising young drivers with plenty of ability (like Simone Campedelli, Sébastien Chardonnet, Federico Della Casa and Alastair Fisher). All will feel they are in a strong position to challenge for a place on the podium. As regards the Team Championship, Delta Rally, Saintéloc Racing and Top Teams will be fighting it out to win the right to run the programme of the winner in 2014.

“The Citroën Top Driver series has already met with great success and we are lucky to have such a great line-up in Portugal”, commented a delighted Marek Nawarecki, Customer Racing Manager for Citroën Racing. “There are two aims: showcase the talented drivers of the future in a world-level competition by giving them the best possible support along with a reliable, high-performance car and also make the Citroën DS3 R3 the benchmark in the WRC3 championship. It’s a big challenge but the crews entered have the qualities and resources required to pull it off!”

“The Citroën Top Driver is a very interesting formula. There’s no age limit and the prize on offer is pretty appealing! It’s also a really great opportunity to drive in rounds of the WRC in a DS3 R3, which has enjoyed huge success over the last few seasons in both national and international championships. I’m up for it and pleased to be taking part in this formula, which looks like it’s going to be fun. I can’t wait to start racing and, looking at the line-up, there’s going to be some serious competition!”

“Competing in a formula like Citroën Top Driver is an incredible opportunity for me. I have been waiting for an opportunity like this for a long time and it has finally come along. I have nothing to lose. I want to give my best at every race and fight to get among the leaders. I will also continue with my programme in Italy in the DS3 R3, which is a genuinely competitive car. I can’t wait to start!”

“I’m ready for the Citroën Top Driver, although there has been a long break after Rallye Monte-Carlo! Last year, Rally de Portugal was the first gravel rally of my short career. I learned a lot of things even though the weather conditions made it particularly difficult. I feel more relaxed about this year’s rally, thanks to the experience gained last year, but I’m also aiming higher this year too. The main goal is still to try and win the Citroën Top Driver and the WRC3. The competition is going to be stiff but we have worked hard this winter, with Thibault and our team, to prepare for these six races. We hope to be in contention to win events straight away, starting with round one.”

“The new formula set up by Citroën Racing is really very attractive, with a great incentive for the winner. It’s no surprise that it has attracted some very good European drivers. The Rally de Portugal isn’t far away now and I’m really excited about racing there. I haven’t competed at any of the rallies on the programme so I’ll have to get to know the various profiles and courses in the DS3 R3. It’s going to be an exciting competition and I hope I can challenge to win events.”

“Citroën Racing is now offering a variety of options to young drivers like me who want to show what they can do in motorsport. There is the Citroën Racing Trophy Junior with the DS3 R1s, the Citroën Racing Trophy with the DS3 R3s and now we have the Citroën Top Driver, which is another step towards securing a works drive. The winner will be able to take part in six world championship rallies in a four-wheel drive car. In the current climate, it’s an incredible, extraordinary opportunity for a driver and I know that we’ll all be everything we can to try and win the title.”

“I really can’t wait to get started at the Rally de Portugal, which is also the first event in the Citroën Top Driver series. It will be a big challenge for Gordon and me and we hope that the experience we have gained during two seasons in WRC Academy will be helpful. I have some very good memories of competing in the Algarve in 2012 when we won the WRC Academy class, after battling with the really difficult conditions. It looks like the series will be very closely contested because many of our rivals have quite a bit of experience in the Citroën DS3 R3 and they are all quick.”

“This season’s programme features six rallies in which I have always dreamed of taking part. There is greater emphasis on gravel, which is the main surface in the World Rally Championship, without however overlooking tarmac altogether. I think that I won’t be the only one to say this but there is a competitive line-up and I’ll need to have a perfect season to have a chance of winning. In any case, my aim is clearly to win the Citroën Top Driver.”

“The concept of Citroën Top Driver is simply brilliant. There are crews taking part with some very impressive competitive records as well as some promising young drivers. It’s going to be an exciting season! Our aim is to try and secure a good position in the formula, but also to have fun and enjoy ourselves in the DS3 R3 on some of the finest stages in the world.”

“I’m really enthusiastic about competing in the Rally de Portugal as part of the Citroën Top Driver series. It is obviously a high-level competition, with some very good drivers and I can’t wait to see what positions everyone will end up in at this first rally. This will be the third time I have competed in Portugal and I have some very food memories from previous rallies here, especially of the super special stage held in Lisbon in front of thousands of fans. My aim here is to finish in the top three, like we did in 2011.”