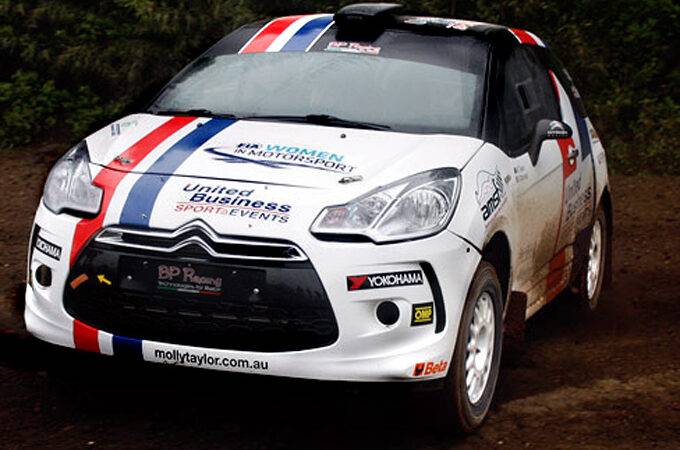 Once again, “we” catch up with Molly Taylor, as she and co-driver Seb Marshall prepare to rally in the Azores. Well, actually, it’s their PR team’s release, but nonetheless, it’s an interesting read, especially if you’re interested in the progress of this promising young crew, competing in this years European Rally Championship.

Similar to Kris Meeke a while ago, Taylor also recognized the importance of live television coverage, painting it very vividly: Back in Australia my family and friends will be able to watch me competing live, on an island on the other side of the world, its pretty incredible when you think about it like that!”

Take a look at the remaining Qs and As below.

It will be the fascinating stage of the Sata Rally Acores, the first rally of the 2013 season for Molly Taylor. Monday, April 22, has been a day of pre-event test, very challenging for the Australian fast female driver of United Business. Molly, with his English co-driver Seb Marshall, has run many kilometers of testing with the Citroen DS3 R3 with Yokohama tyres.

This is the debut rally in 2013, on Monday you have run the tests pre-event, how was your day?

Firstly it was a great feeling just to get back in the car after a long break. The conditions were quite difficult, wet, narrow and slippery with low visibility, but this was perfect for our preparation as it is likely that we will have these conditions on the rally.

For the first time you run with the Yokohama tyres, what’s your first impression?


This test was also our first opportunity to test the Yokohama tyres and we were impressed with their performance, especially in the tricky conditions. Because the roads are so narrow it is important to have a direct feeling with the car, which the Yokohama’s were able to provide. I feel that the car is working very well with the tyres and we have a good set-up going into the rally.

You’ve come to the Azores a few days ago, do you like the island and what is your impression about rally atmosphere that you breathe?

The island is stunning! The scenery is beautiful and everybody is very supportive of the rally and excited to be involved. I think the rally itself will be quite a challenge due to the nature of the roads which are very fast, narrow, steep and on quite a soft slippery surface. They are predicting a lot of rain for the weekend which will keep things interesting.

This rally will also be broadcast “live” by Eurosport, an opportunity to make known rallies more and more, do you consider important that the ERC has a promoter so active on television?

The media coverage provided by Eurosport is a crucial element for increasing the profile of rallying worldwide. The television coverage is one of the most effective ways to bring the action to a large audience and the live element really raises the excitement for the viewers. Back in Australia my family and friends will be able to watch me competing live, on an island on the other side of the world, its pretty incredible when you think about it like that!

The young Australian is ready for the first test of her 2013 Season, aware of the technical resources that have been made available and proud to participate in the European Rally Championship, in which she will be the protagonist in rallyes that have written the history of this beautiful and fascinating sport. In the afternoon of Thursday 25 April, with the dispute of the first special stage, the Coroa da Mata, until Sunday, April 28th, in the evening after more than 240 km of PS, with the dispute of the 19th and last special stage, the Tronqueira, Molly Taylor and Seb Marshall, will be able to prove their worth, with an implacable judge. The chronometer!