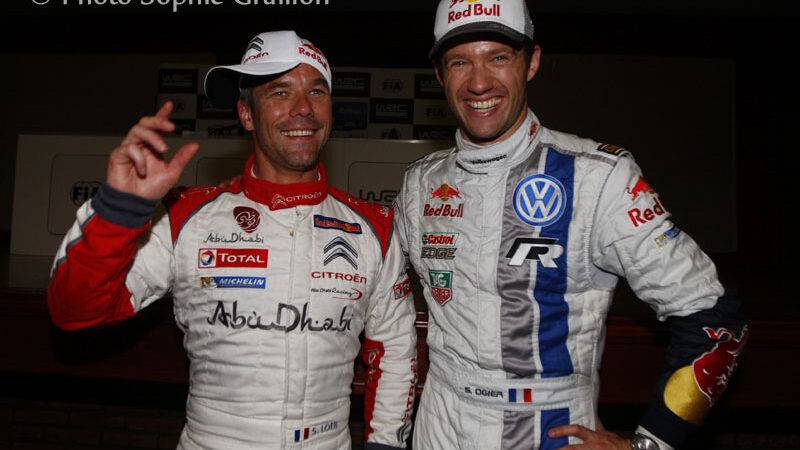 I tried to steer away from the battle of Sebastiens, I really did, but to no avail. It’s futile to even attempt to resist it or deny it. Because this battle is actually one of the biggest stories in recent years, and also, sadly, the story that will never really be told properly. Just because older (and so far more successful) of the two decided to retire from rallying just as the younger one was finally ready to launch his first proper title assault.

It’s funny really, to think that Ogier has nothing to prove to Loeb or anyone else, and should instead fight for the championship and the points. But is it really just about that? While they were both in Citroën, Ogier was not really allowed to challenge Loeb, even though he had the means and obviously the speed. Let’s not even go into what kind of comments he received from Citroën’s bosses at that time.

Then, just when Ogier was about to come back to full time WRC action this year, Loeb decided to bail out. But, not entirely. What’s more interesting, why did he (Loeb) decide to do these four rallies? Saying “your title is only made possible because I stepped down” wasn’t enough, so he had to add “but let me show you what it would look like if I was still around”? So far, Loeb failed to teach Ogier a lesson on one occassion (Sweden), but in Monte Carlo he was victorious.

Perhaps Loeb is just being kind – giving Ogier a chance to win his title and have a go or two on his former team mate, for the sake of it. Can it be?

Of course, it may also be that Loeb and Citroën realized their chances are pretty slim this year, in the battle against Volkswagen and Ogier in particular, so Loeb was tasked with running several events, to bring in some safe points to the team.

It’s a strange situation, whichever way you look at it. By doing some rallies this year, Loeb is sending a pretty clear message – and that is, he’s far from bored or fed up with rallying. I don’t believe it for one second.

So what’s up then? Well, it could very well be that Ogier is the biggest reason for Loeb’s departure. The older Seb wanted to leave on his own terms and on the high, and that was fine, but wouldn’t it be even more spectacular and impressive if he was to stay for a full season, regardless of the outcome! Just because being beaten on the stages still adds to the cult, and stepping down just when the fight was about to begin does not.

Just sayin’… Loeb should have done 2013. Win it or lose it, I believe it would be magnificent way to bid your farewell to the sport.

Silly Sebastiens, we wanted this fight to happen! On the other hand, take a look at the guys on the pic above – no doubt, massive respect exists on both sides, but would it feel nice to beat that other guy in fair fight. You bet your spare tires it would!