Blog questions to Sebastien Ogier in Argentina, read all about it!

Similar to the Q&A session Volkswagen’s Rally The World team organized with Andreas Mikkelsen in Portugal, it was now turn for Sebastien Ogier to share some of his thoughts, in replies to blogs and WRC related websites from all over the world.

As Sebastien tries to close the gap behind his namesake and compatriot Loeb, we can sit back (or at least pretend that’s possible with all the excitement of today’s stages!) and listen or read his replies to interesting questions. World Rally Blog was again quick enough to qualify for a spot on the grid, this time I’ve decided to try and learn something about the very first steps Mr. Ogier made towards becoming a motorsports hero.

Excellent idea and great opportunity to learn more about one of the sport’s stars. Hopefully other teams can follow with similar ways to interact with media & fans.

Enough talk, click through and see what Seb has to say about, well, many things!

RALLYTHEWORLD: WorldRallyBlog.com (Croatia) likes to know: Can you name the single person who had the most influence on you to start competing in rallies?


It’s a really difficult question. My family not so much, because not many of them practiced motorsport – only my uncle was doing motocross. So maybe it’s him who gave me the passion because when I was really young, I was already following him in the tracks. My father was a big fan of Ayrton Senna. So I was following formula 1 and became fan of Senna, these both combined.

RALLYTHEWORLD: MotorpasionF1.com from Spain asks: How would you define your style of driving the Volkswagen Polo R WRC?

RALLYTHEWORLD: RalliSport.net from Finland asks: After having started this season so strongly, do you know how many points you need each round to win the title 2013?

I’ve been checking in the past how much we need to be champion and I’ve seen that Seb Loeb was champion with 22 points sometimes but also with 20 points average in every rally. See, now I’m 25.2 so for sure the start is really good, it’s perfect. I don’t know how much we need but at least one more than the other (laughs).

RALLYTHEWORLD: WetheTerrors.com from the UK asks: With a return to form for team mate Jarri Matti Latvala, how will you deal with the challenge from within the team at this rally?

It’s completely open still, there is no team elder for sure. It’s good that Jari is going faster and faster, it’s good for the team. I’m sure he will be in the battle for victory in the next rallies, immediately here in Argentina, but we have the same chance.

RALLYTHEWORLD: MAXRALLY.com from the UK would like to know: What is your favorite stage on the WRC calendar and why?

There’s a lot of nice stages but I like it when it’s fast and when you slide so let’s say Rammen in Sweden is a really nice stage, in Finland Ouninpohja is a crazy stage – there’s a lot of stages I enjoy to drive in the championship.

RALLYTHEWORLD: Motoso.de from Germany asks: What does a rally driver think about Formula 1 drivers? Do you think they are “sissies” who just can go in circles? 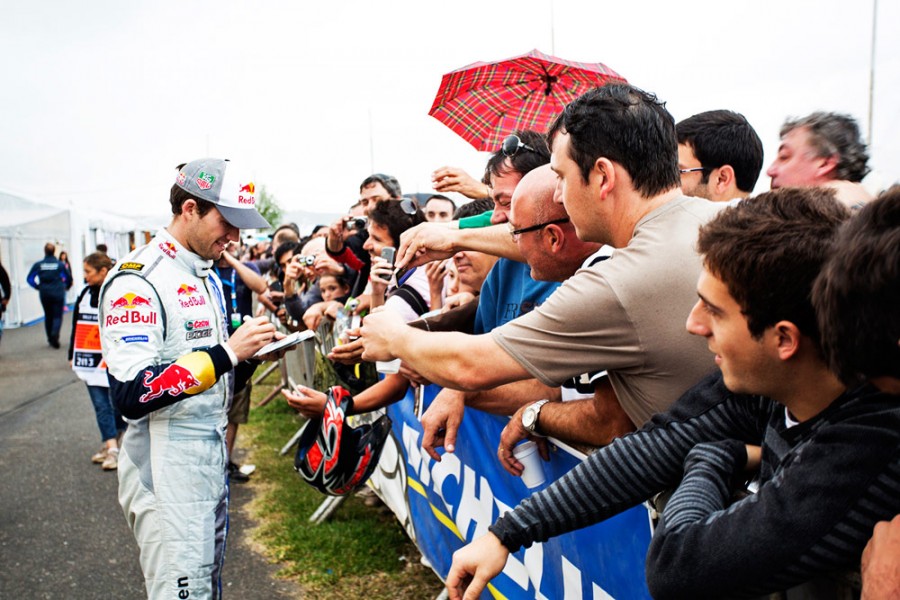 RALLYTHEWORLD: The-Car-Addict.com from Germany asks: Right now you are at the lead – do you have some kind of reward for yourself for the case you should become WRC champion?

I don’t know but for sure a nice holiday, maybe I’m gonna need that because it’s always a long season in the WRC and we usually need some rest at the end. And maybe a nice car to celebrate that. But it’s not done yet, there’s still a lot of work to do.

RALLYTHEWORLD: TheMotoristBlog.com (Germany) asks: The first stage of the first rally in 2014 will start in your hometown in the south of France. Looks like the WRC organizers already expect you to win this year’s title.

I don’t know for sure but if I can start the next season with the number one on my door at home it will be a crazy moment for me, it will be very special. I’m really looking forward to this moment, even if I won’t have the number one but I really hope I will have it. It’s really good news for me that the Rallye Monte-Carlo is back in Hautes-Alpes and especially in my town Gap and I’m very happy with that.