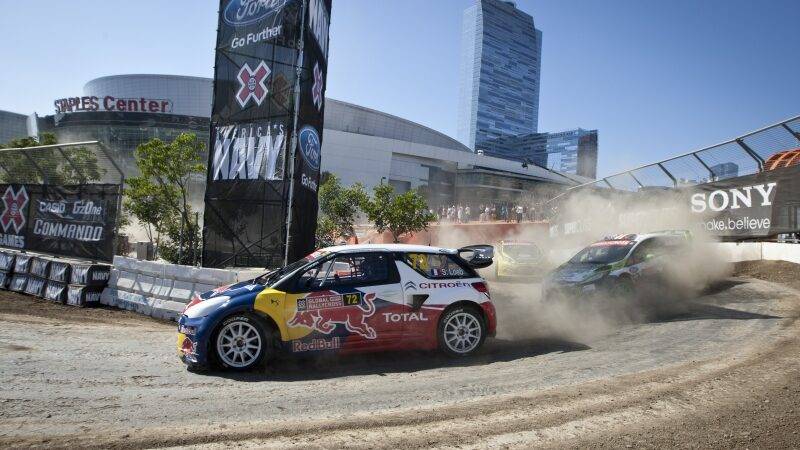 It’s good that Sebastien Loeb did not use the usual retirement “excuse” last year, you know, the one in which drivers say they want to have more time to spend with their families and friends. They also say they are fed up with busy schedules, constant travelling, etc., etc. Well, it’s good thing he did not use that trick, because compared to full WRC season, 2013 looks even more busy for Sebastien! Soon enough, he’ll need his own dedicated motorsports website portal, to cover all the news and series!

Now, let’s see what exactly is on the menu for him, so far. Four rounds of World Rally Championship (three down, one to go), FIA GT Series races in McLaren, two races in Porsche Supercup (one down, one to go), Pikes Peak hillclimb, and to add to all that, he was confirmed as one of the entrants for French round of European Rallycross Championship.

Round 7 is scheduled for the end of August, begining of September in Loheac in France. For this occassion, Loeb will once again sit behind the wheel of Citroën DS3 Supercar – if the name sounds familiar, it’s the same car he used to win gold medal at X-Games show in Los Angeles last year.

[quote]“2013 is definitely a year full of challenges. I received an invitation from the [Rallycross Loheac] organiser Patrick Germain, and I decided to answer positively,” said Loeb. “Apart from the X Games, I have no experience in Rallycross so I will probably have to fight hard against fast specialists in a very high level championship.

“I enjoyed my experience at the X Games last year and I expect something similar. Loheac is the temple of Rallycross,” continues Loeb. “This is a well-known event with always a very big crowd. In a sportive side, this is also a very tough race.

“I couldn’t let this opportunity to participate at least once in my career pass, especially because it is with a Citroën DS3. I am looking forward to go to Loheac, meet the fans and race there.”[/quote]

Rallycross Loheac, 30km south of Rennes in Brittany, is widely accepted as being the best attended rallycross event in world. Regularly attracting more than 30,000 spectators it has been a cornerstone of the French championship for many years and, this year, is included in the FIA European Rallycross Championship for the first time since 2001.

Volkswagen does have a rallycross car – and despite Carlos Sainz is being rumoured to drive one in European Rallycross Championship, we can hope it’s actually preparation for, waaait for it, trumpets, roll the drums – Sebastien Ogier!

I believe we can quote Ken Block here and say: “We’re stoked!”?