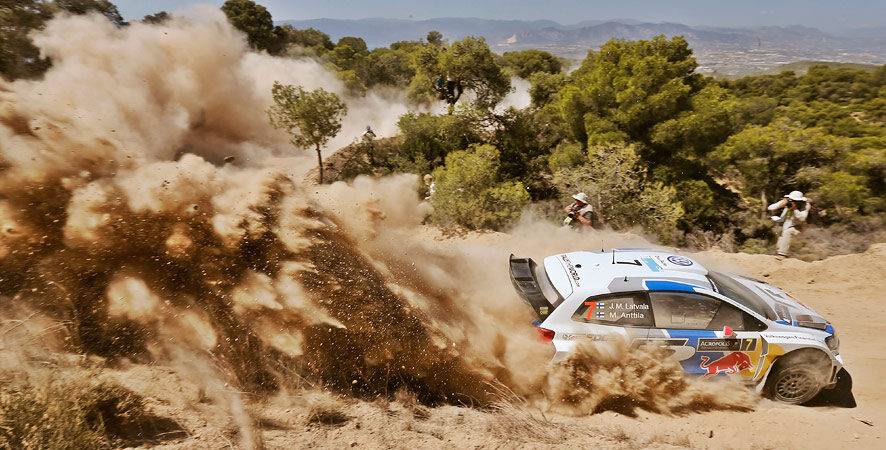 Yesterday Evgeny Novikov refused to be drawn into thinking victory is safe and in his pocket, and with good reason. It’s never good to feel too relaxed or consider any kind of advantage to be big enough. Novikov remained cautious and serious about his job, but it wasn’t enough this morning. Despite the 30+ seconds advantage, Novikov wasn’t into relaxing, and one of the inevitable punctures was his to take today, sending him from first to 8th place on that very stage (SS4). Further problem ensued in the following stage – suspension damage pushed Russian even further down the order. From hero to zero in matter of few kilometers, it’s the nature of the sport, and even more the nature of the Acropolis Rally.

After morning loop of stages, Jari-Matti Latvala is leading, but his lead is merely a lead. One spin or a stall, not to mention those handbrake problems, and it’s gone. Latvala is feeling the pressure, and he is still as detailed and picky about his and car’s performance. Dealing with pressure is part of being on top, and Dani Sordo is doing a great job of keeping Jari-Matti in red alert mode.

Robert Kubica is keeping his cool, and is doing it superbly. His lead after six stages is over minute and a half, but he remains careful about the event. Despite that, he admitted he would like a bit more power under his right foot: “In RRC car we have no power to go to 6th gear, so there could have been more speed on some of the stages.”

What was that Robert, you want WRC car for next year? Teams, pay attention!