During the Acropolis Rally, Becs Williams of WRC Live talked to bosses of the current World Rally Championship teams. Proposed changes to the WRC were the main topic of these interviews, but Becs also included several other questions, mainly the ones discussing the current calendar and the possible inclusion of new events, such as China and/or Brazil.

After listening to Jost Capito (Volkswagen), Yves Matton (Citroën) and Malcolm Wilson (Qatar M-Sport), I can only say they are happy to be more involved in shaping of the future of the sport. All three praised the level of co-operation between the new promoters and the manufacturers, and that is, surely, encouraging. Even more so because the sport is clearly still on the mend following painful crisis that threatened it during 2012.

As expected, the infamous “shootout powerstage” idea caused plenty of controversy, and team bosses have different opinions on the matter. Malcolm Wilson and Yves Matton expressed disagreement with the suggested “powerstage winner takes it all” idea, but Jost Capito still thinks this idea is good. Citroën and M-Sport believe WRC should do more to gain more solid format in terms of timing – both of them mentioned Sunday 1pm to be ideal time to show off whatever stage WRC decides to show live – with importance on being always there, at that time, so audience can get used to seeing WRC on TV on Sunday afternoon, much like football matches or Formula 1 races have solid schedules. Of course, it’s not possible to have entire rally live on TV, not everything about rally can be put into that one Sunday stage, but this initiative is good I believe.

Yves Matton suggested that WRC should take small steps and be very careful about it’s DNA and identity of the sport. Malcolm Wilson thinks that Fafe rally sprint is good example of what kind of ideas might be incorporated into the events, to raise their profile and attract both TV and on-site audiences.

All three bosses raised some pretty interesting ideas and concepts, but I still cannot figure out the reasoning behind the “shootout powerstage” idea, supported by Jost Capito. He argues that it’s not a big drama if this stage gets to decide on two adjacent positions, so whoever was 4th can end up 3rd, and whoever is 2nd can end up 1st in the rally. But why? Why? Only so the guy on top step of the podium is the same one who won the powerstage, so even the most “silly” TV viewer can understand the connection? It would destroy sport in ways not even imaginable today.

In my opinion, no matter how you flip this coin, it’ll always land on the bad side. There is nothing, NOTHING good in this suggestion, and it would do nothing for the sport. In Capito’s opinon, WRC should not only be looking to please it’s current fanbase, but it must also be interesting and exciting for people not really into understanding the rules. Say what?

Seriously, I don’t mind fans who don’t give a damn about the rules, and are only here for thrills, except that I do. Seriously? Do we need to mutilate the sport, only to cater to fans who came to see one stage, don’t care about what was happening on previous stages, don’t care about the rules…? What exactly are we supposed to show to these fans? Honestly, if you don’t understand the basic principles of rallying, and if that’s so hard to explain and understand, then I don’t think Mr. Capito and the rest of WRC are talking about the same type of audience.

Malcolm and Yves are speaking with experience and they’re very reluctant about the extreme and radical changes. And for a good reason, I believe. The audience you pick up by offering them fast-food kind of rally, will stay around for a while, digest your cheap fun, then disappear as they look for more similarly cheap thrills.

I do understand Capito’s desire to have something, anything done to WRC to raise it’s profile, put it on TV and have some exposure! After all, Volkswagen threw tons of cash into their WRC project, and currently, I don’t think they’re very happy with the returns. Volkswagen’s boss is also asking for DNA of the sport to be preserved, but doesn’t seem to recognize that the very concept of this silly powerstage threatens this DNA. Changes such as this are not going to bring anything good to the sport, or it’s teams and manufacturers. Guys, people who are not INTELLIGENT enough to understand basic principles of rally are also not intelligent enough to understand the subtle connections between “see our car race and win, then go out and buy it”.

Jost is also proposing changes to the Rally 2 concept, but I’m not sure (he did not elaborate on it further) if he wants to see the idea ditched completely, or is it only about the “Rally 2 drivers” not being eligible for overall win.

In the end, please don’t destroy our sport, just for the sake of bringing in some idiots who don’t even bother to understand it. Please. Don’t. If football fans can learn every damn player by it’s name, eyes colour, shoe size, and of course know every single rule to the letter, why should WRC require close to nothing of it’s fans? Is the sport’s only future in having a stupid fanbase with mandatory attention deficit disorder? Come on, guys.

Malcolm offered an “excuse” for this idea, saying new promoters have no rallying background, which, he thinks (and I agree, to an extent) is good thing, because it brings a whole new way of thinking into the sport. Perhaps this idea is just one (and reportedly it is, in fact, there are many ideas being worked on, according to Malcolm) suggested on the fly, but why did it stick and wasn’t dismissed is beyond me.

Clearly, there are many questions still. Many ideas and concepts are being discussed, some say the number is huge, some say neither of them is offering the universal solution, and some think we should not be scared of going into extremes. Which way will WRC go remains to be seen.

To listen to all podcasts, head over to WRC.com’s Fanzone and enjoy. Thanks Becs for amazing job with these interviews! 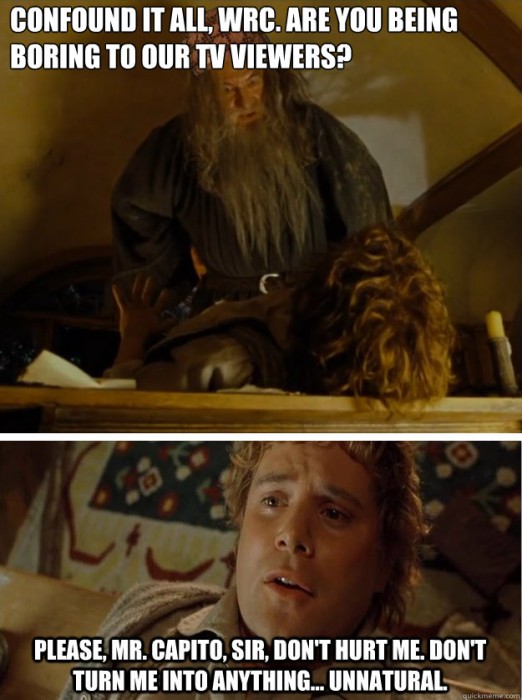