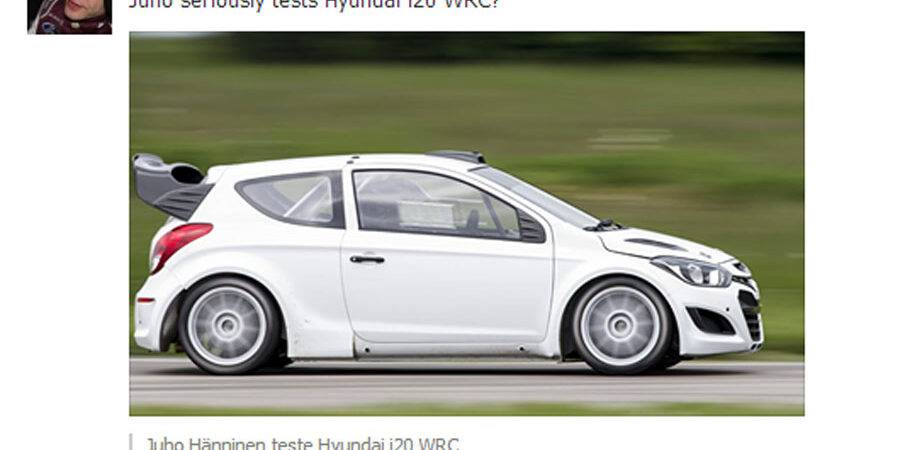 It’s the curse of the social networks, and the English language. When the two collide and create the final product, you can never be sure about the author’s intentions. There is rarely anything more than just few words, describing a photo or a bit of information, so we actually remain as clueless as we were before.

Now, if you have no idea what I’m talking about, I don’t blame you. I am easily confused, and it’s even easier for me to confuse other people. But, I’m not alone in this! Just look at the photo attached to this article. It’s a screengrab of a post, published by Juho Hanninen (or by person running Juho’s Facebook account). What does he mean with that comment? Did he just confirm he is, in fact, the guy behind the wheel in that Hyundai i20 WRC? Or is he joking?

It all started when another Facebook group posted image of i20 WRC, titled “Juho Hanninen test drives Hyundai i20 WRC”, and Juho shared and commented that post on his Facebook page.

To add to confusion, there are no followups or denials. Damn it, we need to know!

Upon closer look (meaning, actually opening the profile and taking a look at it) I’ve realized that this is, in fact, “unofficial fan page for Juho Hänninen”, which means all of the above was just a tease. Well played, but you will, usually, want to add “unofficial” or “fan page” to the name of the profile on Facebook, instead of posing to be the man himself. And confusing the easily confused people, such as poor me (and not only me, judging from the comments on that particular post on Facebook).

But, still! The driver(s), who are they?