What once was months away, is now weeks and soon will only be days – Pikes Peak International Hillclimb takes off on June 30, but drivers and teams are already very busy, with test sessions and preparations. But there is a catch, and thanks to Peugeot Sport’s official review, I now know how is it possible for test sessions to take part on this public road. The trick is to get up early. Very early.

Military regime is nothing compared to Sebastien Loeb regime, but again, he is nothing like the rest of us, at least when it comes to driving and sporting discipline. He gets up at little past 3 AM, as soon as the LED light on his robotic device switches from red to green, signaling he is recharged and ready to return to the world of normal people.

Last week, Seb and Peugeot were able to sample the actual track for the first time, and over the course of three days they did multiple runs, tuning up the suspension and the rest of the car to the specific requirements set by the sometimes steep and twisty and sometimes flat and fast track.

Read below what Seb thought of the test sessions, and also what he thinks about early morning starts. Funny, instead of mentioning coffee in the same sentence as the 3 AM waking up, he offers 240 kph top speed as a nice little method of waking up!

Ready to take on Pikes Peak

Sébastien and the 208 T16 Pikes Peak are ready to take on one of motorsport’s biggest challenges, after three days of testing in Colorado.

For the first time, the nine-time world champion and the wild animal got the chance to drive the famous Pikes Peak hill climb course in its entirety, which reaches a vertiginous 4300 metres at its summit. Peugeot Sport used the test to refine the set-up of the car to match the unique demands of Pikes Peak. The team and driver are now ready to take on the massive challenge in two weeks time. Or as ready as anyone will ever be for one of the biggest adventures that remain in motorsport…

“We’ve done two test sessions now and my feeling is that the car is ready,” said Loeb. “But one big question mark is the fact that many of our serious rivals have skipped the two test sessions held so far. So while I’m confident that we’ve done as much as we need to do, you never know what the others have up their sleeve.”

Like everybody else in Peugeot Sport, Seb has had to endure a punishing regime of early mornings over the last three days. Testing is limited to just three hours after sunrise so that the mountain can be opened up to the public during the day afterwards.

Consequently, the Frenchman’s alarm clock has gone off at 3.15am every day recently, in order to be up in the service area at around 4am, ready for action.

[quote]“I don’t really like early mornings – who does – but this is certainly a pretty extreme way to wake up!” he pointed out.[/quote] “It’s not like a race with a warm-up lap, or a rally with a road section, before you start here. You just sit in the car and bang! You’re off at full speed straight away! Full speed in the 208 T16 Pikes Peak is something in the region of 240kph, thanks to an 875-horsepower engine and a power to weight ratio of one horsepower per kilogram.

The main purpose of the second test was to validate the findings from the first test one week ago – and to work on tyre choice as well as other smaller set-up items. All of this with the aim to make the monstrous Peugeot as easy to drive as possible. “A car like this is actually never what you would call easy to drive, but that’s what makes it so thrilling,” said Loeb at the end of the test. “In the end though, we discovered some really useful things. I never had a chance to drive the whole mountain before – just sections of it – so the work we did on Friday, when we could go from the very bottom all the way to the top, was a really good taste of what was to come. And we had four potential tyre compounds to choose from, so we evaluated them all and selected the compound that we thought would suit the conditions best.” 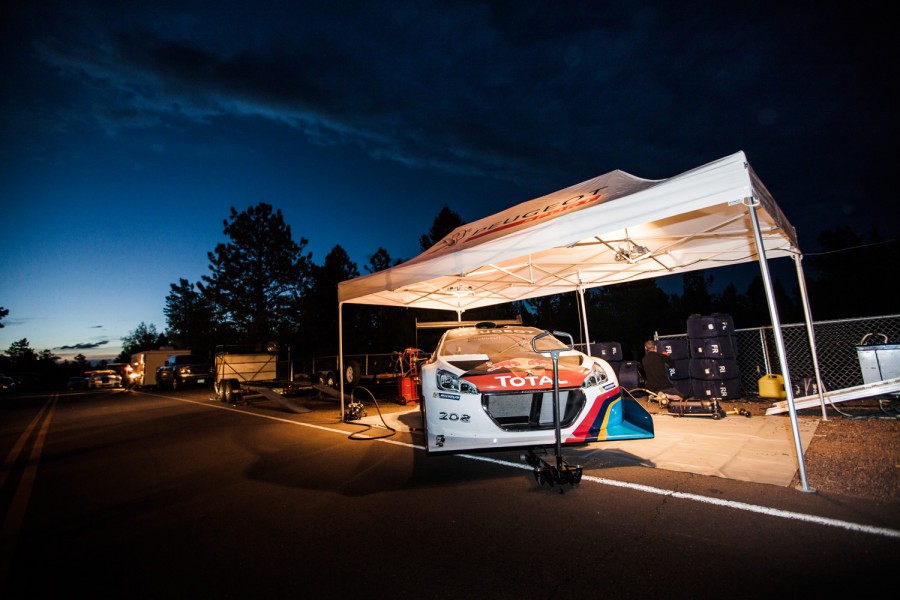 One thing that Loeb learned from completing the whole of the mountain route in testing was just what a varied challenge it is. From a high-speed, high energy section at the beginning, the course then flattens out to become a test of power and handling at the top, where the air is thin and the landscape is lunar.

An important item on the test agenda was therefore suspension and dampers. The team Peugeot Sport tried out different suspension set-ups to find the best overall compromise for all the different surfaces that make up the 20 kilometres and 156 neck-snapping corners. At the bottom, the surface is fast and flowing. But at the top the final two kilometres are bumpy and rutted. The car – like its driver – has to work well everywhere.

After three days of hard work, Peugeot Sport’s project chief Jean-Christophe Pallier declared himself happy with the progress made. “The most important thing is that we’ve had reliability and we didn’t actually change much on the car in terms of set-up,” he reported. “It shows that we started from a good base. Of course the feedback we’ve had from Sebastien has been excellent in terms of pointing out a few ideas as to how we can improve further.”

The 208 T16 Pikes Peak will now be stripped down and re-built completely before the final tests and qualifying for the ‘Race to the Clouds’ on Sunday June 30. Sébastien Loeb is off home for five days… before the action starts up all over again.