European Rallycross Championship, can you recheck your TV partners? 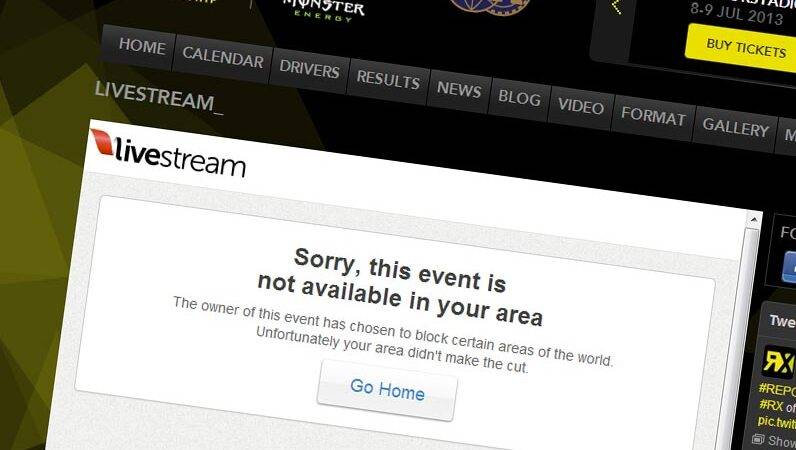 Not being from the US or the UK, I’m kind of familiar with the “this content is not available in your area” messages, popping up on various online services, such as radio, music or video streams. One such service is this year’s FIA European Rallycross Championship. It definitely is exciting and popular, but sadly, it’s also not available in some regions. By “not available” I mean you cannot watch races online via Livestream.

Officially, Livestream access is blocked for the countries which have TV deals in place. Makes perfect sense to me. But there is a problem. In Croatia, which is where I spend my days, there is no European Rallycross Championship. Official website lists certain Sport Klub as a local broadcast provider, but after checking all imaginable Sport Klub TV schedules (and there are about dozen of those channels in the region), I found no trace of European Rallycross Championship in any of those. Of course, since Croatia, and many other countries, is among the countries with TV deal, there is no Livestream access. We’re out of luck.

So each week there is a round of the European Rallycross Championship, all we can do is either fool the Livestream into thinking we’re not actually in one of the “TV deal” countries, or follow Twitter and imagine the races in our heads. Maybe there are also some less legal ways to access Livestream’s feeds, but that really isn’t the proper way for fans to watch these races.

Perhaps my dedication failed me, and I missed the obvious, and I’ll happily correct myself if there in fact is a working TV coverage in the area. Also, I’m not sure about the neighboring countries, many of which also have this Sport Klub thing listed as official TV deal provider, but from what I saw in their schedules, no mentions of ERC either.

Can this be fixed before the end of the season? We’ll see. We don’t even need to know why these problems occured in first place, just give us our ERC on TV or online. Please.

UPDATE: According to tweet by Bence Magyar, Hungarian Sport Klub did cover the Swedish round of the ERC. Still not 100% sure about Slovenia and the rest of the region.