Once upon a time there was a great video game, called Colin McRae Rally. In this game you could do all sorts of things, as long as they all involved rallying. Very nice selection of cars and  tracks coupled with then-revolutionary car physics resulted in hours, or more likely, days and days (ALRIGHT, months and months!) of top notch gaming satisfaction. Trying to be fast on the tricky stages, driving a virtual Audi S1 Quattro, was superbly challenging, especially if you only had keyboard at your disposal. So A and Z (Y) became gas and brake pedals and , and . were to steer left and right. For handbrake I used the – key, situated to the left of the right-hand Shift key. I never could embrace the concept of driving with one hand using arrow keys – two hand approach worked for me, thanks to another legendary game, F1 GrandPrix.

Why go through all this stone age mumbo jumbo? Because of the gimmicks hidden in the original Colin McRae Rally. Somebody at Codemasters had a very peculiar sense of humour, carefully obscured by the all important cheat code veil. Once you entered those cheat codes, your CMR turned into this strange, bizarre mix of … things. All of a sudden you were rallying among the stars, driving on a narrow track set to resemble a wall, or around the huge shopping carts and video tapes. There was also a hidden stage with fantastic hairpins and zero room for error. Oh, and it also had a jump that would always kill the car because 100 meter vertical jumps are usually quite rough without a parachute.

The point of this all? Patience! One particular cheat code turned your rally car into flying, floating, hovering vehicle, resembling the famous DeLorean, driven by “Doc” Emmett Brown in Back to the Future. And that’s exactly what images from Rally Finland remind me of, each year. Countless jumps and crests are heaven for motor sport photographers – nothing says speed like a flying rally car, preferably at least one or two meters above the ground. This is what Rally Finland is all about, speed, confidence and total commitment. Drop your guard for just one split second, and you’ll be embraced by the surrounding forests, never to be seen again.

For this edition of Photo Rally I decided to use only jumps images. Honestly, I am a tad bit disappointed with the images offered by the top three teams on their media sites. Best job award goes to Citroën Racing this time around, even though I am getting more and more annoyed with the fact that their images are over edited and over photoshopped, for no apparent reason. I understand slight edits, crops and colour correction, but to apply HDRs and other filters so liberally is never a good thing. For stock photography I was taught that it’s best to leave the images as close to their original state as possible, even though that rule is rarely very popular in stock photography. But for media use, there is really no need to apply all those effects – let the editors do that, if necessary. You’re not producing images for commercial use, these are editorial images, used to illustrate articles and stories. Yes, your car looks all wow if it screams colour and has 0 contrast, but for media use this is close to useless. Or so I was taught. 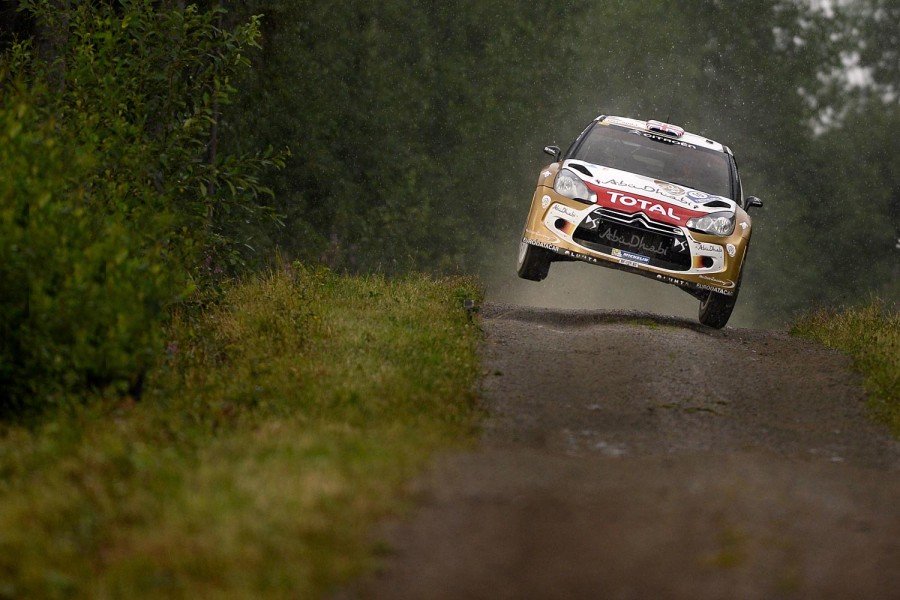 I really like the atmosphere in this image, for me, it’s just perfect. The angle, the thirds, the surrounding scenery and the minimalism all add to the mood rather than taking away from it. Bad weather led to fantastic lighting conditions with no harsh shadows and sort of gloomy but very effective selection of colours. The car appears almost two dimensional (duh!) from this angle, more like a cardboard panel or a sticker, applied to the deep green of Finnish forests. If there were edits and postprocessing done to this image, and I figure there might be some brightness corrections, they were spot on. Not your usual Rally Finland photo and that’s what makes this one even better. Well done, Mr. Lavadinho, this is what I’m talking about. Keep it simple and don’t force things into image, they’re supposed to feel real. Keep the HDR and all other make-up techniques away. 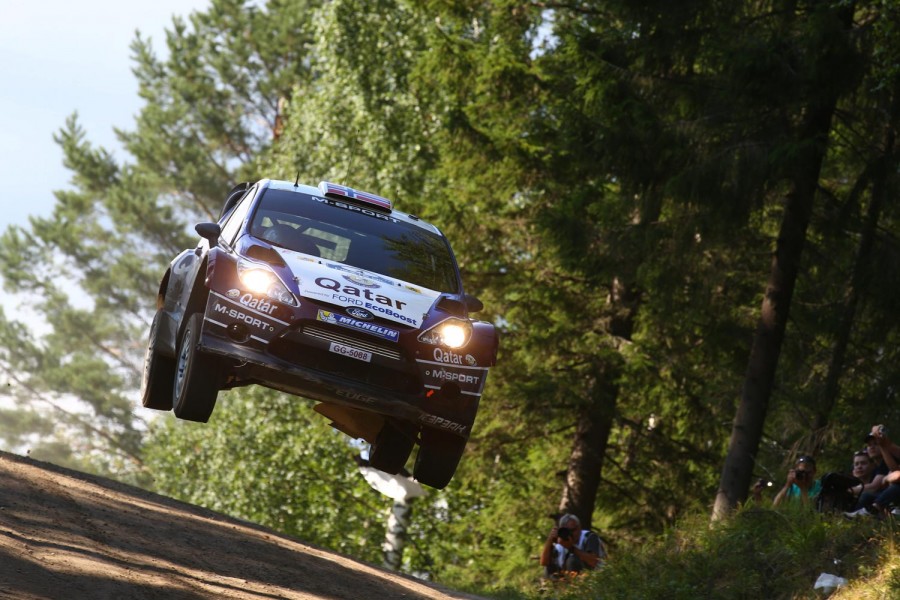 One of many flights and jumps Mads Ostberg and Jonas Andersson executed last week in Finland. Classic image from classic angle, nothing extremely new or particularly awesome about it, but it works. Tilted angle adds to the gravity defying effect, and in all honesty this is the best jump image I could find in Qatar M-Sport’s database. I don’t like jump images shot against the light, so the car is dark and set against the equally dark forest. Luckily, this is not one such image, there was a nice touch of light, contrast and colour to this one and unlike some other jump images from their database, this one includes a bit of scenery and people – so you actually know it’s a rally, and not some random jump on some random gravel road. The art of motor sport photography is MUCH more than just setting your shutter to 1/1000th and sitting on the shutter button – much like drivers, you need to find the best angles, best frames and understand the lighting. Especially if the car in question is being a bitch to photograph in forests because dark livery. 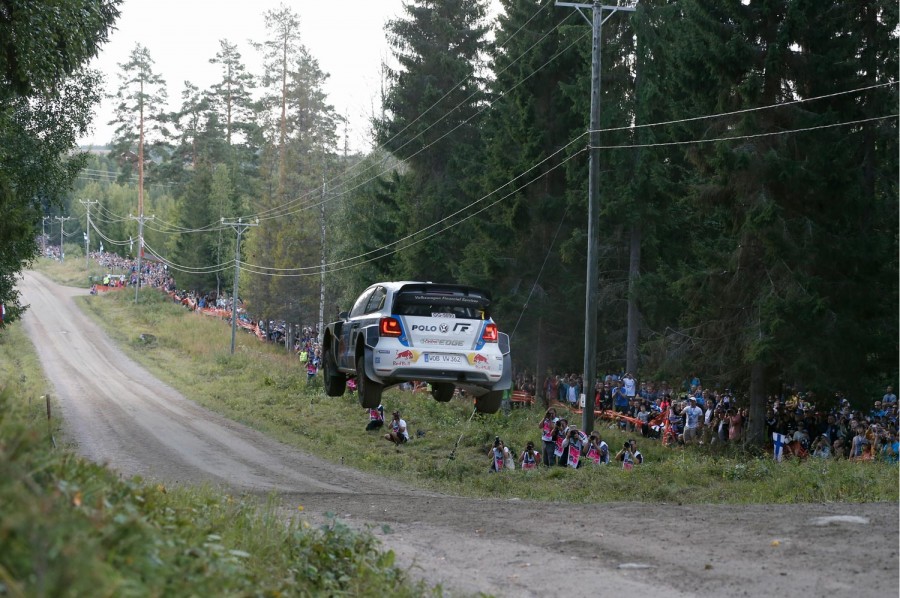 For some reason, Volkswagen’s selection of Rally Finland images is somewhat missing. I’m not sure what exactly is wrong, but compared to their work in previous WRC events, Volkswagen’s photographers (or rather, agency hired by the VW) did not deliver this time around. Well, to be honest, among 350+ images you’re bound to find one that stands out, and for me this was the one. Since I limited this selection to jump images only, this one stood out (there were few more, especially the “lone car jumping ones”) as the perfect example of what Finnish Grand Prix is all about. Smooth gravel (not so smooth this year, though!), crests and then more crests and very high speed straight sections. Much like that CMR cheat code car, Volkswagen Polo is suspended in air, and the crowds are loving it. It’s no wonder so many great rally drivers come from Finland – only when the sport is loved and understood by masses will you be able to thrive and produce top quality racing and rally drivers. To elaborate further on the fact that I found VW’s image collection to be lacking excitement… perhaps it’s actually not that easy to capture the thrill of rally cars flying by you at 160 km/h and relay the same excitement in just one photo? Some things you can only experience in person. In person, you’ll get goosebumps and more after you see a jump like this, but in picture it’s just a flying car – everything else is left to your imagination.

PRO TIP: Do click on the images for bigger size – the only proper way to enjoy photography.