Hyundai picks up the pace, the i20 WRC is evolving

This morning, Hyundai Motorsport released official report from the recent test sessions in France and Finland. Thanks to fans and enthusiasts, we were able to see the car in action in numerous videos in the last couple of weeks, and if anything, i20 WRC looks very capable and serious, so to speak. It tackled the jumps in Finland like a champ, or should I say like a car with developed and tuned enough suspension and a nice amount of balance. In France, team ran their first kilometers on tarmac and again, test drivers were satisfied, despite claiming there is more work ahead.

In today’s report we also learn that yes, Hyundai did in fact test some new aero components and ideas in Finland, which also marked the first appearance of the first evolution of the 2014 spec car out in the wild. Given how little time Hyundai has on their hands they must make every test session and every test drive count. And I strongly believe they are doing just that. In my opinion, one of the most important fields of any team’s success is the ability to communicate with the world, not only through results but also through interaction with the fans and media. So far, Hyundai is doing the right thing in releasing the official reports and statements in regular intervals, keeping the buzz alive.

After debut in Finland, I do suppose we can expect to see more of evolved 2014 i20 WRC in action on the test stages. It’s encouraging that the team is focusing on the aero department and performance – to me that sounds like they have other areas firmly under control, and that’s a very good news.

Sure, I base my conclusions and impressions on videos and texts only – I have never seen the car live, and even if I did, I don’t think that would qualify me to be as competent to judge its performance – I’m not Bryan Bouffier, Juho Hanninen or Chris Atkinson!

Hyundai Motorsport’s intensive testing schedule continued its relentless pace throughout August as the 2014-spec i20 WRC car made its tarmac debut in France, as well as a productive test on the high-speed gravel conditions in Finland.

Test drivers Bryan Bouffier and Juho Hänninen were both in action over a total of ten days with both drivers sharing duties on tarmac before gravel specialist Hänninen assumed control on his home turf.

The latest iteration of the i20 WRC car hit tarmac roads for the first time in the Vosges region of France from August 12 to 16 with the main objective of gathering experience and data on this terrain. 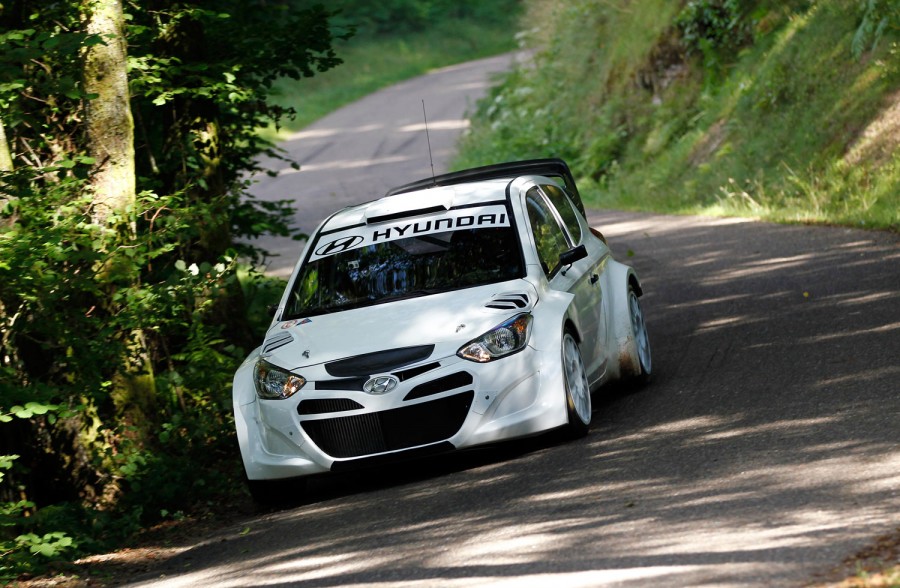 “For our first time with the 2014-spec i20 WRC on tarmac, we adopted a deliberately broad test plan with the main goal of defining the base set-up for that surface,” explained Team Principal Michel Nandan. “We completed good mileage with no major issues, and obtained valuable feedback from both Bryan and Juho, which will allow us to concentrate next on fine-tuning the individual components. Overall, it was a very positive tarmac debut”

Bryan Bouffier added: “I think this test has given us a very good base from which we can develop further. The roads in the Vosges region allowed us to assess some key components and to identify the characteristics of the i20 WRC on tarmac. I’m very pleased with the behaviour of the car in the fast sections and when the road is bumpy. Of course, we will continue working on some areas but overall I find the car very well balanced and easy to handle.”

From the tarmac test, the team moved to Finland last week to tackle the fast gravel roads and the well-known jumps, which characterise Rally Finland, one of the most technically demanding rallies of World Rally Championship. With local hero Juho Hänninen behind the wheel, the test featured an upgraded version of the 2014-spec of the i20 WRC.

“In Finland we used an evolution of the 2014-spec car, different from the one which we used in France,” added Nandan. “We applied some changes to the shape of the body and during the test we worked on the aerodynamics of the car. The i20 WRC was fitted with a new aerodynamics package and we focussed our efforts in finding a good balance. We wanted to check that all aspects of the car worked properly at high speed, as well as on the jumps, which are extremely demanding. The car can reach extreme acceleration through these jumps so it is essential to study the behaviour of the car and all of its components upon landing. We’ve also tried different suspension and differential solutions to develop the best set-up for next year’s rally.”

Juho Hänninen commented: “I was positively surprised with the handling of the i20 WRC after the first run. When you go to Finland for the first time you never know what to expect; sometimes, it can be really rough and there can be a lot of work required on the suspension. In this case, though, it was really easy from the first day and we were able to work making only minor adjustments. The car reacted very well to every change we made throughout the five days. I felt that I could trust the car immediately and the feeling got stronger day after day.”

With test sessions planned almost every two weeks, Hyundai Motorsport now faces the busiest time of the development phase ahead of its entry into next year’s FIA World Rally Championship.

[quote]“With new features on the car on every test session there’s a lot of work to be done not only on the ground but also back at the factory in order to get the car ready. There’s a great team effort and everyone is doing his best”, concluded Nandan.[/quote]

To see Hyundai i20 WRC in gravel action, lookie here.