2013 Rally Australia was spectacular. How would I know, I never set foot on the continent (but I do have cousins living there, ha!). Easy, just look at the photos and the videos. It was narrow, dusty maze of forest stages set on the tricky and deceiving mix of fast sections and twisty paths. The smallest of errors turned into bitter disappointments. The most common question among drivers was “What the hell happened to my understanding of grip?” That elusive thing was nowhere to be found, unless you really focused hard, tuned your driving style a bit and then enjoy a bit more confidence behind the wheel.

With dust playing a major part in Rally Australia (luckily, not the deciding factor, because organizers were able to fit longer time gaps between the cars) I decided to use dust as the main theme in this event’s photo selection process. Media archives of Volkswagen, Citroën and Qatar are full of really amazing imagery – Volkswagen delivered a huge selection of images, as usual; Citroën offered their typically great mix of post-processed photos combined with the untouched ones and Qatar was en route to disappoint me until I reached the last few pages of their Rally Australia collection. Truly great photos lurked there – one of which made its way to the leading place above this text. Qatar M-Sport’s images are best observed in full format, the lighting was great, shadows were awesome and the dust and the trees made some of the images look almost like paintings. Really enjoyable.

Here’s what I thought were best three images from Rally Australia, selected from official media archives. CLICK ON IMAGES TO SEE LARGER VERSIONS otherwise I’m not your friend anymore. 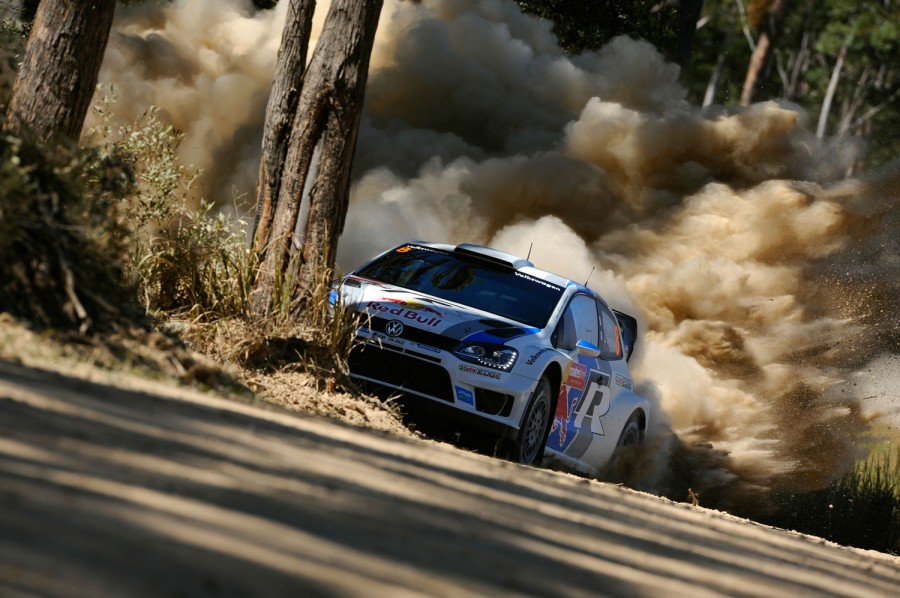 Fantastic image, from the angle to the shadows, partially obscuring our view of the car. But we know very well what’s going on – the LED day lights are Polo’s signature and the speed is all but evident from the huge cloud of dust behind the car. Really powerful image and one of my favourites in Volkswagen’s collection. Untrained eye may not be able to judge the angle of the corner and the car, but we know it was very fast and very sideways – a picture perfect rally style driving by none other than I-almost-won-it-damn-it Sebastien Ogier. It started well, went even better but didn’t end up good for Kris Meeke and Chris Patterson in Australia. Tough situation for both team and driver, but it was never going to be easy, if you think about it. But I digress. This particular photo… I still firmly stand against the use of radical post processing and HDR in media images. It should be up to editors to decide whether they want to go with original image or they wish to apply some effects, kill some shadows and tame some highlights. However, in rare occassions post processing works. Yes this image is “louder” then its counterparts above and below, so I suppose it’s mission accomplished in terms of grabbing the attention of the viewer, but the pimped colours are not the most impressive thing about it. It’s the dust, glorious, overpowering dust, framing the car and isolating it from the rest of the scene. This time around, it was Qatar’s turn to be a hard pick. Usually, there are three or four images to pick from, if you’re lucky, but this time I really had to think and observe for a while. I am still not sure if this photo is the best choice, but I really enjoyed it. Similar to other pics in this series, this particular photograph is the work of art. Intentional or not, who knows, who cares – these are the digital days, you don’t think about how many frames you’ll fire when the car storms into the shot. For this image, everything clicked perfectly. The angle, the position of the car, beautiful layers of dust, creating almost monochromatic feel to the scene, the trees in the background framing the action and to top it all, the rays of sunshine, gracing the dusty clouds. Spectacular! In smaller format this photo may not look like much, but do click it and prepare to be stunned.