McRae, Just Colin – unique look into the life of a rallying legend

Colin McRae influenced millions of people around the world, his name became a global phenomenon and he single-handedly, guided by some of the world’s best co-drivers, promoted rallying across the globe more effectively than any other method of promotion ever could. His flat-out approach was not a mask, he was, by all accounts, a man who lived and worked following that legendary “If in doubt, flat out!” motto. Giving up or coming in second was not on Colin’s menu as long as the chance existed of a victory he would be out chasing it, often realizing just how harsh and merciless rallying can be at times. He surely won too few rallies and titles, numbers do not reveal the talent and skill he possessed, but perhaps one book will.

Whether your life and addiction to rallying was influenced and inspired by Colin McRae and his driving antics or not, this book is a must have. Written and photographed by the people who knew Colin, worked and lived with him, reveals the true character of a man behind so many unique and unforgettable rally moments. This book goes through Colin’s life and work in a flat-out manner, bringing snippets from the rallies and stages combined with stories from Colin’s childhood and later life, it reads almost as a rally report. McRae, just Colin also documents many changes that affected WRC during the “McRae era, so it’s much more then just a book about a single driver, it’s a testament to the exciting decades of the sport we all love so much.

According to official information, it took Colin McMaster and David Evans three years to collect all the information and the numbers are stunning – over 300 photographs and more than 56.000 words were put together to form a unique insight into the life of a rallying legend.

For more information about the book, visit official website – www.mcraebook.com. Below is the snippet from one of the pages, detailing the famous Bunnings jumps in Australia. Who better to describe the sensation of flying high above the Oz outback than Colin’s long term co-driver and another legend of the sport, Nicky Grist. 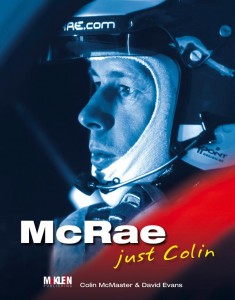 I knew Colin was faster than most drivers, but when it came to jumps nobody had more commitment than him. During the recce for Australia, we arrived at the famous Bunnings complex and Colin said: “These jumps are great!”

He made the pacenotes for the jumps in the way that a normal person would, so they read something like: “Caution. Five-right plus over bad jump, into six-left over jump, 60 crest…” The problem was, on the rally, the speed was so high leading up to the first crest that if you didn’t slow down then anything could happen.

I remember hurtling into the first compression, then taking off and being surprised how everything went quiet. When we landed there was barely enough time to set up for the second jump, which we took sideways and I really jarred my back against the side of the seat on the landing after that one. We got through the watersplash, passed the flying finish, the crowd went wild and Colin turned to me and said: “Did ya like that, wee man?”

I tried to come up with something witty and clever to say and all I could manage was, “How high were we on those jump? Gee-whiz, that was high, man. I’ve got a headache.”

You had to expect Colin to come with something spectacular and flamboyant because he was always the showman and that’s what made people love him the world over. If he was spectating at Bunnings he would have loved seeing somebody jump as high as he did.