The brightest moments of a brilliant career, selected by Seb Loeb

Can we even begin to imagine what must it feel like to have such a successful career in motor sports? To be able to look back and see all those giants and challenges defeated and conquered. For any successful professional, looking back to the humble beginnings often puts things into perspective, so I assume it’s the same for racing and rally drivers as well. The things that happened since are a testament to your passion, skill and will to better yourself with each new rally and on every stage. Nine titles down the road, Sebastien Loeb looks back to where and when it all started and even though it’s a fantastic overview of a incredible career, it’s just scratching the surface of the true greatness of this man. And he is about to wave final goodbyes to the sport, but I for one don’t think he will ever fully leave. There will always be Sebastien Loeb out there, I can see him do an odd rally or two now and then, perhaps even more at some point in the future, you never know. Even if he stays true to his words and leave the rallying for good, his aura will linger on for many years to come. He set some huge records and references, something every young rally driver can look forward to emulate and conquer.

Would it be fantastic to see Mr Loeb and his team do one final show in Rallye de France? Of course it would. I am, at this point, lost for words as I try to explain the bitterness and disappointment over the fact that I was offered the opportunity to be in France this week end, but I was not able to accept this once-in-a-lifetime invitation. This rally already is creating such a huge buzz – Mikko Hirvonen tweeted about huge crowds following Citroën’s testing in France few days ago – and it’s going to be one of the events which will go down in history of this magnificent sport. Sebastien Loeb is bidding farewells to rally, Sebastien Ogier is en route to clinch first out of many titles and all that in a country which brought us Citroën, Peugeot, Francois Delecour, Gilles Panizzi, Alain Prost, to name but a few giants of motor sports. The F word would be best used to describe the level of disappointment I felt over missing such an event. But, I am turning this into a story about me, am I not?

Sebastien Loeb and Citroën Racing’s PR team put together a story which looks back to the 2001 and the start of the collaboration that will storm the rallying scene in years to come. This story follows below. My personal favourite is the 2007 Rally New Zealand, now former WRC event which Loeb, interestingly, did not win, but still has very fond memories of.

You will be missed Mr Loeb. You made the impossible look very possible with the right amount of will and passion.

A few days before taking part in his 168th WRC round, the statistics from Sébastien Loeb’s racing career are genuinely staggering: 78 overall wins, 116 podium-finishes, 896 stage wins, 1,619 points scored, only 20 retirements… and of course, 9 World Championship titles, shared with Daniel Elena. Although it is difficult to single out only a few memories, Seb very willingly agreed to do just that…

“Having met my targets in the French Championship and in the J-WRC, Guy Fréquelin handed me a drive in a Xsara WRC for the first time. To be honest, I was hoping for a good result, as I had more or less matched Bug’s times in testing. After the first stage, I was four seconds off the lead pace, despite not having really pushed. So despite my confidence, that came as quite a surprise! We had a phenomenal end to the rally, finishing just behind Panizzi. Before the rally, I had been sending faxes to the manufacturers just to remind them that I was around. After Sanremo, everybody called me up to try and get me to sign for a full season. Although it was only to compete for a half-season in 2002, I wanted to stay with Citroën. I think I made the right decision!”

“This is probably the whole team’s fondest memory. For the start of our first full season in WRC, we dominated the podium at the most famous rally in the world! At the time, Carlos Sainz and Colin McRae were the benchmarks. Having two World Champions as team-mates was a little bit intimidating. There was always a good atmosphere between us, even when I started to get the better of them in terms of results. They made a big difference to me, and to Citroën.”

“I have always competed in this sport to be the best and become World Champion. But before I made it, I sometimes wondered if I was capable of doing it. That day, we achieved our goal in only our second full season! The first title was very special, because we secured it in France. Everyone was there: my family, my friends… I was pleased that I was able to win it for my father. He didn’t say much when we were together, but some journalists told me that he had spoken to them about what it meant to him. I was very proud of what I had just achieved.” 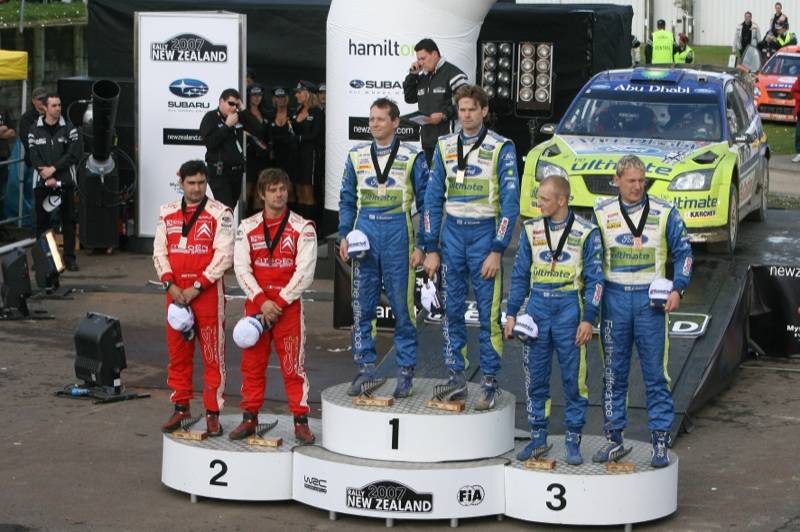 “I don’t like talking about losing, but finishing as runner-up here was really special. This rally was one of my finest battles with Marcus Gronhölm. We had such a fantastic time driving on these magnificent gravel roads. But there was also a lot of tension. I was leading going into the final leg, but was never more than three seconds ahead. On Whaanga Coast, the penultimate stage of the rally, Marcus grabbed the lead, by 7/10ths. It all came down to the super special stage. Although I won the stage, I lost out overall by just 3/10ths…”

“Argentina is a rally where we have always done well, but we love it most of all for the incredible atmosphere, the stunning scenery and the famous barbecues that Daniel enjoys so much! The local Citroën subsidiary is very active and every year, they organise various promotional activities. That year, I had Diego Maradona in the co-driver’s seat. When we set off on the road section, he was very excited because he thought that the huge crowds were there for him. And yet, with the lowered position of the co-driver’s seat and the reflective, tinted windows, nobody could see him! As I don’t speak Spanish and his English is pretty limited, I couldn’t explain to him… When we got back and he got out of the C4, it was total hysteria. And this time, it was for him!”

“Finland had long been the preserve of Marcus Gronhölm. In 2008, he had just retired, but that didn’t make things that much easier. I found myself up against Mikko Hirvonen, who was just as determined to win his home rally. We both went at it flat out. Neither of us made any mistakes and I ended up winning by less than ten seconds. After that win, I said that I wouldn‘t try to win it again, because the level of risk involved in driving at 180kph right next to the trees seemed too high for me. However, I felt sufficiently confident to win it on two further occasions… These are among the most prestigious wins I have enjoyed in my racing career.”

“As we had already secured two world titles in Japan, we knew that Sapporo wasn’t the best place to go out to celebrate after the rally. So we flew to Tokyo on the Sunday evening. During the transfer between the two airports, we diverted the shuttle, making a stop-off in the city centre. The poor driver had to stay double-parked for three hours in Roppongi, Tokyo’s top district for nightlife. A lot of drinking was done that night and a few people ended up ill, although that was undoubtedly because the mint used in the mojitos wasn’t fresh! Some of the journalists there could have confirmed this if only they hadn’t been among the most ‘tired and emotional’… Suffice to say that the flight back to Paris was very quiet!”

“Although I had already won Rally Sweden in 2004, it’s this winter rally which I feel is the greater achievement. The conditions were perfect. We had a good layer of ice covered in compacted snow and snow banks that were firm enough for you to be able to run wide onto them on the corners. Once again, I had a superb scrap with Mikko, from start to finish. Neither of us made any mistakes and at the end, there was less than ten seconds between us.” 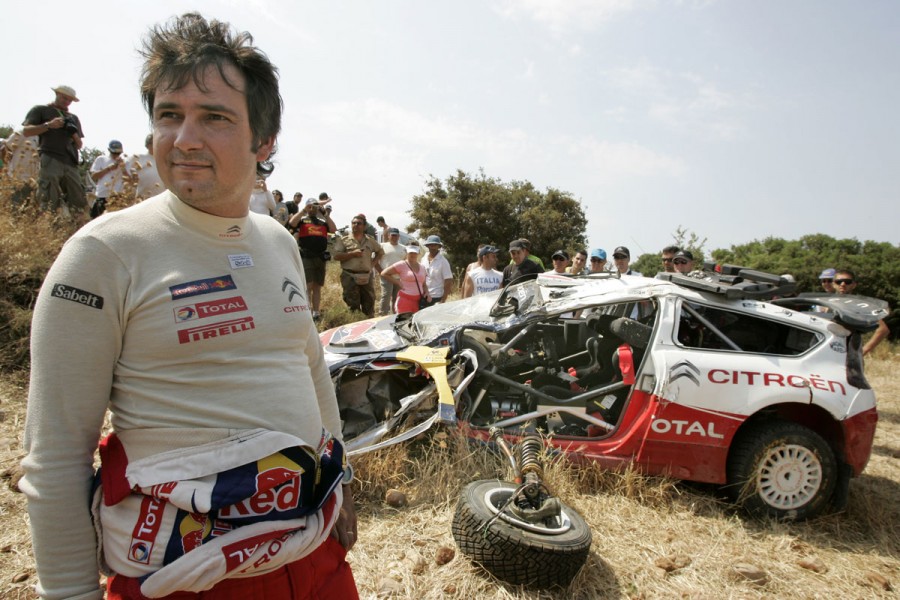 “Unquestionably, that was our biggest crash! As is often the case, it came about because of a momentary lapse of concentration. The car was thrown into an impressive series of rolls. After the accident, I went looking for my telephone. In actual fact, it had remained in the small case attached to the door, which I where usually I put it. The tricky part was finding the door in question, which was lying somewhere in the field! The incident had significant ramifications, as afterwards we suffered a fairly poor run of results. We ended up winning the title by a single point in Wales!”

“After the 2004 Tour de Corse, this was definitely the most intense experience. There was a lot of tension for this first running of the Rallye de France in Alsace, because we had the chance to win both titles. There was pressure on me, but I tried my best not to show it, by withdrawing and blocking it all out. I felt very relieved when we made it to the finish. Being crowned Champion at home, in Haguenau, was something that I would never have imagined possible. When I met up with Séverine and my friends on the road section that led back to Strasbourg, I couldn’t help but shed a few tears. And that’s not something that happens every day, I can tell you!”

“My ninth win in Germany was particularly special, because it meant I had beaten my own record for the number of wins at a single rally. Of course, I have also won eight times in Argentina and Spain, seven in Monte-Carlo, so there are quite a few impressive runs! I’ve always liked this rally because I feel the crowd is very supportive of me. And it was also the best way of paying tribute to Bug, who had just died. Of course, he won this rally in 2001.”

“And what else could I pick for my final choice other this very special moment?! This was my last World Championship title – in rallying, at least! I was very emotional, but above all proud to have completed this great journey with Daniel and Citroën Racing. Our fans, our families, our team, all the important people for us were there and we had to win it for them. In any case, I never felt sad or had any regrets, because I knew that the end of this journey would mark the start of a new adventure…”