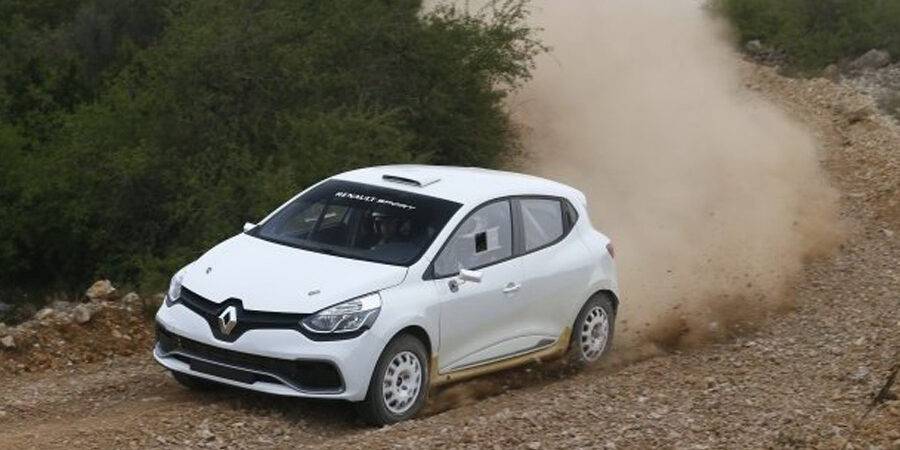 Sometime ago Renault Sport teased us with some images clearly dealing with rally car being developed and tested. Needless to say, many people jumped from joy, shouting “WRC!”. Not me, no. Well, okay, I did, so what. Anyway, it wasn’t WRC, at least not the real big WRC, but Renault still did work on a rally car and now they’re ready to show it to us in action.

Her name is Renault Clio R3T and this is what her parents had to say about her.

In pursuing its commitment to producing cars tailored to its motorsport/customer range, Renault Sport Technologies has strengthened its involvement in rally with the Clio R.S. R3T. Due to be approved in 2014, the new turbo-engined model will be on show at the Rallye du Var, the last round of the Renault Sport Rally Trophy season.

Unveiled in 2006, the Clio R.S. R3 has made an indelible mark on Renault Sport’s involvement in rally. Offering performance comparable to the Super 1600 at half the cost, the car has scored hundreds of wins and dozens of titles the world over. The sale of 373 kits is an indication of the success Renault Sport Technologies has enjoyed with the first of its models built to comply with FIA R3 regulations.

The rally range has grown in size and quality since then, with the addition of the Twingo R.S. R2 Evo, Twingo R.S. R1 and the Megane R.S. N4, to name but a few. Joining them on the scene next year will be the Clio R.S. R3T.

Taking as its template the Clio R.S. 200 EDC, a car universally recognised for its performance and versatility on the road, the Clio R.S. R3T has been designed to open up new horizons for the crews that drive it.

The Clio R.S. 200 EDC’s turbocharged 1618cc engine has been specifically adapted to racing by Renault Sport’s engineers. The kit comprises a six-speed sequential manual gearbox, with steering-wheel paddle shifts offered as optional in the asphalt version. In offering its customers a cohesive and reliable package, Renault Sport Technologies relies on renowned suppliers such as Sadev for gearboxes, Sachs for shock absorbers, PFC for brakes and Cosworth for electronics.

“With the Clio R.S. R3T, our aim has been to come up with a high-performance, reliable vehicle adaptable to every type of surface, all for an operating cost below that of the product it replaces,” said Renault Sport Technologies Motorsports Director Arnaud Boulanger. “The success enjoyed by the first generation of Clio R.S. R3s has bolstered our belief that this formula is especially well suited to meet the requirements of our customers. This class has given Renault Sport the opportunity to find its feet and to excel in a number of markets, several of them outside Europe, with our cars now present in Asia and the Pacific, Latin America and Oceania.”

He added: “Initial tests have been promising and a lengthy development campaign has been scheduled in the lead-up to the kit’s approval. Put through its paces by several drivers, the Clio R.S. R3T will be tested for more than ten weeks on dirt and asphalt with a view to identifying the best options.”

The car is expected to receive approval early in the second half of 2014.