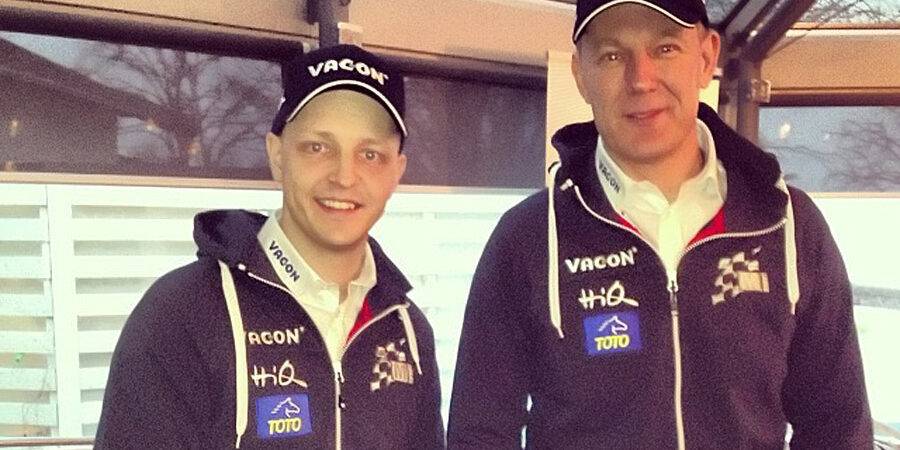 First of all, unless the picture shown below in a tweet is a hoax and a joke, I’d like to wish a very hap-hap-happy birthday to Jarmo Lehtinen, the brains in Mikko Hirvonen’s car, the guy reading the pace notes, wielding the numbers and staying calm and high spirited in the process. The cake Mikko provided for Jarmo was not as epic as you might expect, but guys were busy and there was no time for spectacular celebrations. Perhaps later today they’ll throw a massive Finnish party with all the usual ingredients (also known as chilly lakes, hot saunas, gigantic amounts of alcohol and the famous ability to have a great time).

Mikko and Jarmo staged a press conference today, presenting their sponsors for the upcoming 2014 season. As we know, they switched camps from Citroën to M-Sport, so this year we’ll follow Mikko and Jarmo in the Fiesta RS WRC.

New sponsors are Vacon, a manufacturer of variable-speed AC drives, or frequency converters (thanks Wikipedia); HiQ, an IT and management consultancy firm specialising in communications, software development and business-critical IT (soundy dry? It’s not, their website is great and I believe we’ll see some creative ideas involving Mikko, Jarmo and their WRC adventures this year) and finally Toto, the betting games system specially targeting equestrian sports. I love the combination of high stakes, advanced technology and the communication and IT skills!

Best of luck in the upcoming season, guys!