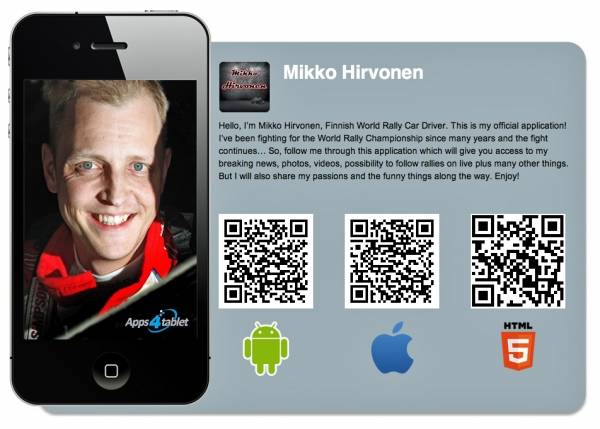 There is a lot of good, positive wibe surrounding Mikko Hirvonen and Jarmo Lehtinen this year, which is a good thing for any driver and especially good thing for a driver who is a tiny bit keen to prove some things to some people. And to himself. After two years at Citroën without the desired results (disclaimer: my English may be iffy here, but I am NOT saying lack of results was caused by Citroën, before someone with short fuse steps in) Mikko is back in busin… erm, back in For… umm, back in M-Sport, wearing blue, looking serious and ready to start winning (back the trust some people lost in him).

But, that’s not all. Mikko got apped recently, which is my attempt at being clever with phrases. I apologize. Mikko actually launched his own app, which will tell you, NSA style, where is he, what’s he doing and plenty more things. To learn what exactly Mikko is going to show and share on his Android and iOS enabled app, take a look below and start downloading.

Mikko Hirvonen > Angry Birds. For now, at least. Scroll all the way down to see the tweet with a link to a photo of new M-Sport overalls. Lookin’ sharp!

New season, new challenges with the Ford Fiesta RS WRC, it’s the year of changes for the four times vice World Rally Champion Mikko Hirvonen. It is also the opportunity for the Finnish driver to launch a new application. See bellow what this new App is all about.

THE NAME OF THE APP?
Mikko Hirvonen

WHAT YOU WILL FIND IN THIS APP?

Updates and new sections will appear during the 2014 season.

NOTIFICATION “PUSH”
Activate your notification push and receive message from Mikko and comments on live during the rallies.

WHAT IS THE COST OF THIS APP?
It’s free of charge!

For Iphone and Ipad : On the App Store

For all other devices : http://vwq.r.mailjet.com/redirect/y805t42bv0xk3obvnxjocv/login.app2you.co/html5/?appcode=A4T204

Hit the QR images in the main image and you’ll be insta-transferred to the app, really!