New Subaru Impreza WRX STI, the details are out

This site is usually not dedicated to ordinary road cars, but when road cars belong to a well respected family of models, or there is a chance or a hint of a possible rally involvement, then I think there’s no harm in featuring a civilian car or two.

The brand new Subaru Impreza WRX in STI guise finally stepped out on the stage this week in Detroit, so we can collectively first drool and appreciate its features and nice looking, Mitsubishi Lancer Evo inspired body (some say, I say look closer, these two were similar since, well, forever) and then we can also collectively mourn and weep, because chances of seeing this turned into a WRC car are slim, to say the least.

Nonetheless, the beasty beast is here, in all its four-wheel-driven glory and WRC or no WRC, there’s plenty to love about it. Two and a half liter turbocharged engine is in, so that’s the end of one guessing game. It delivers a WRC worthy amount of power, 305 horsies to be exact, six-speed manual gearbox then does its thing and shifts it over to the Multi-Mode DCCD all wheel drive transmission, armed with all sorts of candy: 41:59 torque split, mechanical and electronic diff controls and all this (and plenty more) can be adjusted and changed thanks to several modes of operation. Setup changes FTW.

I admit I am posting this partly because I am hoping Subaru realizes the amount of love and interest their brand enjoys in the rallying community. They could and should really do something about it!

Official PR from Subaru USA follows below. I found Subaru UK one to lack all the details. Except for the one, which I’m quoting here for my UK readers.

The good news for performance car fans around the country is that as a result of the recent movements in exchange rates, the new model will be priced at a highly competitive £28,995 when it hits showrooms in May, some £4,000 cheaper than its predecessor. 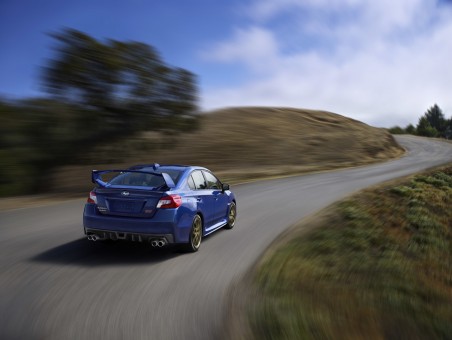 Powered by the legendary 305-horsepower 2.5-liter turbocharged BOXER engine, the 2015 WRX STI debuts a new four-door wide-body design, built on a stiffer chassis for even greater handling agility and precision. The WRX STI provides a rally-bred drivetrain and all-wheel drive handling that is unique to this model. Handling is enhanced with a stiffer chassis, firmer springs and faster steering (13.0:1 ratio).

The 2015 WRX STI carries its bold personality inside, where new Alcantara seating surfaces accented by red and black leather bolsters and red stitching set the tone for the upgraded and roomier cabin. A driver-focused interior remains integral to the WRX STI performance character, with the new model debuting a motorsports-inspired flat-bottom steering wheel and new whiplash-reducing performance-design front seats with height and tilt-adjustable head restraints. A wide array of new user technologies include, for the first time in a WRX STI, availability of a harman/kardon® premium audio system.

A bolder front design makes the 2015 WRX STI look ready to devour the road. The “nose-cone” configuration combines the grille and bumper cap into one unit ahead of the hood, which for the 2015 model is made from aluminum to reduce weight over the front of the car. Narrower headlights, designed to evoke a raptor’s stare, flank the Subaru hexagonal grille. It’s a more powerful stare thanks to new standard LED low-beam headlights.

The special hood, fenders, doors and quarters, bumpers, headlights and taillight clusters convey the WRX STI identity. As on previous WRX STI models, a functional hood scoop supplies the intercooler with fresh air, and in the 2015 model it is set more deeply into the hood to provide better forward visibility.

The 2015 WRX STI body structure makes greater use of high-tensile steel than the previous model and features special stiffening elements at key locations. The stiffer chassis helps yield a super-quick steering response that was benchmarked against top-handling sports cars. The 13.0:1 steering ratio provides a quick 2.5 turns lock-to-lock compared to 14.5:1 and 2.8 for the standard WRX model.

The 2015 WRX STI is powered by a 2.5-liter turbocharged/intercooled 4-cylinder BOXER engine that employs the Dual Active Valve Control System (Dual AVCS). The engine, which is exclusive to the STI model, produces 305 horsepower (SAE) at 6,000 rpm and 290 lb.-ft. of peak torque at 4,000 rpm.

The WRX STI engine is teamed exclusively with a specially reinforced 6-speed manual transmission, which includes an STI short-throw shifter in the Launch Edition model. Incline Start Assist can momentarily prevent the car from rolling backward when being driven away from a stop on an incline.

A one-inch longer wheelbase than the previous WRX STI helps provide a roomier cabin in the new model. The windshield is more raked than before, with the A-pillar pulled forward nearly eight inches at the base for better forward visibility, aided by a lower dashboard and narrower A-pillars. Lower side sills and wider-opening doors make ingress/egress easier. Rear seat legroom is increased by nearly two inches, and trunk capacity is now 12 cu. ft., up from 11.3 cu. ft. in the previous WRX STI sedan. A standard 60/40-split fold-down rear seat extends versatility. New available Welcome Lighting responds to the driver approaching the car.

In the 2015 WRX STI, the driver grips a new flat-bottom, leather-wrapped tilt/telescoping steering wheel that integrates switches for audio and Bluetooth control. The STI Design electroluminescent gauge panel gets a new 3.5-in. central LCD screen that displays various functions, including low-level warnings for oil and windshield washer fluid and the selected gear.

An available touch-screen navigation system displays on a 6.1-inch LCD screen and offers voice controls. The WRX STI Limited model adds the luxury of leather-trimmed upholstery, an 8-way power driver’s seat, the harman/kardon premium audio system and a power moonroof that opens one inch farther than on the previous model.

Subaru’s renowned safety package uses the brand’s proven Ring-shaped Reinforcement Frame body structure, which has been shown to excel in the new small overlap test by the Insurance Institute for Highway Safety (IIHS). In the cabin, a driver’s knee airbag is added to the roster of safety features that includes front side pelvis/torso airbags and side curtain airbags that offer front and rear outboard seat coverage.

Subaru produces a full line of all-wheel drive sedans, crossovers and SUVs, along with the rear-wheel drive BRZ sports car.