One photo instead of three or four, one photo will and should do. This year, Monte was about many things; debuts, comebacks, surprises and disappointments and all that wrapped up in this beautiful, shiny, icy, slippery, rainy, snowy, slushy package. Decades upon decades (upon decades) of tradition surround this event and without drama and suspense Monte would be just another random Rallye XYZ (if those even exist, random meh rallies that is). By selecting just one photograph from the official WRC teams media archives I want to put emphasis on that particular image, there can only be one winner, similar to only one crew standing at the top step of the podium after so many kilometers of driving on the limit. Hundreds upon hundreds (upon hundreds) of photos flashed before our jury’s eyes before WRB decided that this particular picture is The One.

I don’t want just another photo with a car jumping, or the photo with perfectly exposed sponsor logos but with no real atmosphere around it. Sure, this atmosphere thing is extremely subjective – what makes me go “oh wow” will make others go “oh what the hell”, but allow me to make the calls here and suggest this image to be the most awesome of the lot. Last year I was a big Volkswagen fanboy, even when Mr Jost Capito declared his support for that silly powerstage idea. I love Volkswagen this year too. And Citroën. M-Sport! But, can they compare with the appreciation I feel toward Hyundai this year? No, they cannot. It’s me and here’s why. Every time a new team or driver arrive, I cross all fingers and toes and few other things, hoping they make it – drivers and teams are rare arrivals and when they do arrive, I want them to have a good start and be competitive not just for their own sake but for the sport’s sake as well. That said, this photo was NOT picked because it’s Hyundai and because boohoo poor team had a rough Monte so let’s put a nice pic on the site and write a poem to them.

The winner
This photograph is all about being classy and also classic. The classic angle, car leaning on the front wheel in the corner, twisty road in the background, add some spectators and then be VERY VERY CLEVER about what you do with the post-processing filters. Unless this photo is raw and shows the exact amount of light and contrast, I must praise whoever did the editing – top job. For me at least. It’s sooooo easy to apply too much HDR and to kill all the contrast or boost colours so much that even the good old Velvia films would seem bleak in comparison. This photo, however, is right on the money on all accounts. The tones of the background are in harmony with the car’s livery and the overall atmosphere has this, currently VERY popular, Instagram-esque feel, so to speak. For me, that’s all it takes. It’s not too original, it’s not even bold or radical, it’s a classic rally photograph taken on the classiest of classy rally events in the world. Works for me. 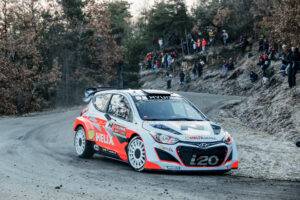