The statistics are on their side, and for once it feels good to throw some numbers around, especially if those numbers are related to anything and everything motor sports. Of course, you know at least basic things about Prodrive. If not, you probably at least saw one of their rally or race cars, one of the recent machines or one of the famous cars of the past. Blue Subaru Impreza, golden wheels, Colin McRae, Richard Burns, Rothmans Porsches… yeah, now you get it! I jest, of course we all know about Prodrive – they were the driving force behind so many successful stories in the past, not only in rallying but also in circuit racing as well. For three decades they were able to tear through the countryside and around the tracks and if all these years, victories and titles are any indication, we haven’t seen the last of them, by far. Of course, we the WRC fans would very much like to see them back in the Championship – that was bound to happen in 2012, but we know how that particular story ended. Still, hope remains, WRC is on the rise again and we could see Prodrive return to the pinnacle of rallying in the coming years.

They started small in Silverstone and grew to become one of the leading forces in motor sports and advanced technologies research, employing over 500 people and competing in leading racing series around the world. Here’s to you, giants from Banbury, for another 30 years and then 30 more.

If you want to learn more about Prodrive, and you know you do, read on, the official review follows below.

On 27 January 1984, Prodrive competed in and won its first ever event, the Qatar International Rally, the first round of the inaugural FIA Middle East Rally Championship. 30 years, 1123 events and 262 wins later, Prodrive is now not only one of the most successful motorsport operations in the world, but has diversified into a business developing advanced technology and lightweight composites for the automotive, aerospace and defence sectors, employing more than 500 people in the UK.

In 1984, the Porsche 911 SC RS driven by local Qatari-driver Saeed Al Hajri, went on to win the 1984 Middle East Rally Championship, while Henri Toivonen campaigned the same car in the European Rally Championship, just missing out on the title as the result of a back injury.

Prodrive chairman, David Richards, recalls that first event: “We entered a fairly standard Porsche 911 in our first rally in Qatar and survived numerous problems as the car was far more suited to the race track than desert roads! The Porsche came straight from the factory in Germany and it was to be the first of numerous successes we enjoyed with Saeed Al Hajri, but winning our first event was particularly memorable.”

Perhaps the most iconic moment in the company’s history was Colin McRae’s victory on the RAC Rally in 1995, making him Britain’s first World Rally champion and bringing Subaru the first of three consecutive manufacturer titles. Prodrive brought further WRC titles for Richard Burns in 2001 and Petter Solberg in 2003.

While Prodrive is often best known for its 19 year association with Subaru, around half of all its 871 rally car starts were made with other manufacturers including Porsche, MG, BMW and MINI. Indeed, Prodrive first competed in the WRC in 1984 at the Acropolis and would win its first WRC event in a privately-entered BMW driven by Bernard Beguin at the Tour de Corse in 1987.

Prodrive’s success in rallying is mirrored by its success in circuit racing, a discipline it started in 1987 by running BMW’s entry in the British Touring Car Championship. In 1988, in his first full season, Frank Sytner won the BTCC title outright, and then took class titles in 1989 and 1990 in the Prodrive-prepared car. After six seasons with BMW, Prodrive went on to run manufacturer programmes for Alfa Romeo, Honda and finally Ford, bringing the blue oval its final BTCC title in 2000 with the Mondeo, at the end of the Super Touring Car era.

In 2001, Prodrive turned its hand to sports cars, re-engineering the Ferrari 550 Maranello into a successful GT car and securing the ultimate accolade in sports car racing, by winning the GT class at Le Mans in 2003. This was a feat it was to repeat in 2007 and 2008 with the Aston Martin DBR9 through a full works programme with the iconic British manufacturer, a partnership which continues to this day.

While Prodrive was competing in sports cars from its Banbury base, in Australia it was running the factory Ford Performance Racing team in the V8 Supercar Series. After 10 seasons, and finishing as runners up on four occasions, Prodrive sold the team at the end of 2012.

In 2014, Prodrive aims to add to its winning total as it returns to the FIA World Endurance Championship with Aston Martin Racing, now in its tenth year, and with its MINI rally and rallycross programmes. 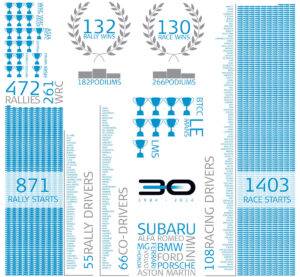 Some of the greatest names in rallying and racing have driven for Prodrive over the years. The 55 rally drivers include 11 World Rally champions: McRae, Kankkunen, Vatanen, Alen, Mikkola, Sainz, Auriol, Burns, Solberg, Makinen and Gronholm.These drivers were supported by 66 co-drivers. The 108 racing drivers include all the best touring and sports car drivers including Sytner, Menu, Tarquini, Weaver, Hoy, Rydell, Thompson, Lowndes, Brabham and Turner as well as F1 stars like Villeneuve, Warwick, Palmer, Lamy, Salo, Verstappen and Davidson. While some, including Colin McRae, Warwick and Sarrazin, drove in both categories, McRae taking a podium at Le Mans in 2004.

Throughout the last 30 years, but particularly during the last decade, Prodrive has also supported customers running race and rally cars built by Prodrive in championships across the world. In 2013 alone, Aston Martin Racing customers, took part in over 500 races.

Today, while motorsport remains core to Prodrive, it is just one of four businesses which include advanced technology, composites and Brand&, which produces the clothing collections for many motorsport teams, as well as automotive and sports brands.

“Walk around our headquarters in Banbury or our composite facility in Milton Keynes today and you are just as likely to see us making major assemblies and bodywork for sports and luxury vehicles as you are race and rally cars. Indeed, we are currently working on satellite components, the next Mars Rover, first class cabins for commercial jets and the latest technologies for electric and hybrid cars,” said David Richards.

“Prodrive today is a far cry from when we started in 1984 in a small workshop at Silverstone, when the whole company would sit around the lunch table. Nowadays it’s the diverse nature of the business that’s our strength and whilst I am certain we will still be racing cars in the future, I am equally certain that the technology we’ll be applying will be quite different to that of today.”