Citroën hoping for a home advantage in Sweden

There is, or should I say was something special in and about the snow covered stages in Sweden and Norway. For decades only Scandinavian drivers were skilled and fast enough to score victories on these special stages, up until something even more special came along. That unnatural force was Sebastien Loeb, of course, but this year he will not tackle the stages in frozen North. Despite that, Citroën Racing does not lack optimism, and why should they. The start of the season in Monte Carlo was pretty impressive, besides, we’re talking title winning team here. Drivers are just the same and after Monte I don’t think anybody thinks Kris Meeke or Mads Ostberg lack motivation. They’re both super keen to take the fight to Volkswagen and others. Can Citroën build on the results from Monte Carlo and go one step higher in Sweden. According to their own preview, they sure can. Being Norwegian, Mads Ostberg is automatically considered a favourite for top steps of the podium because Norwegians, like all Scandinavians, are born in snow, they sleep in snow and of course they drive on snow. Seriously though, Rally Sweden is much more than just snow and ice and to be fast on the white stuff is not only about how heavy your right foot is. You often hear drivers say that ice provides huge amounts of grip with proper studded tyres, but even then the surface varies, especially if snow is not consistent. Also snowbanks, if they’re hard enough they can bounce your car the way you did not want it to be bounced and if they’re too soft, they can swallow the car and leave you stranded. Safe to say, it takes some brains to be able to be competitively fast on the snow and of course being local helps a lot.

Mads will be on home soil while Kris will have a nice little challenge on his hands, driving a WRC car on the snow, thinking about the need for points after podium finish in Monte Carlo enabled him to start the year on a very high note.

Citroën will be the team to watch in Sweden. See below what they prepared for the official preview.

Between 1950 and 2003, only Swedish and Finnish drivers won on the snow-covered roads of Rally Sweden. In 2004, Citroën, Sébastien Loeb and Daniel Elena wrote one of the first great chapters in their incredible story in the WRC.

Back in 2004, the World Championship-winning team entered two Citroën Xsara WRCs for Sébastien Loeb/Daniel Elena and Carlos Sainz/Marc Marti. Although the Spanish pair settled for fifth position at the end, the Franco-Monegasque crew beat the Nordic drivers on their favourite surface, finishing over forty seconds ahead of Marcus Grönholm and Timo Rautiainen!

Sébastien Loeb/Daniel Elena and Mikko Hirvonen/Jarmo Lehtinen have since finished as runners-up five times for Citroën.

384 SPIKES TO CUT THROUGH THE ICE

The first time that Rally Sweden was contested as part of the World Championship, studded tyres were banned! Since then, the regulations have changed significantly. In 1986, the Citroën BX 4TC driven by Jean-Claude Andruet to sixth overall was fitted with Michelin tyres featuring around 600 pyramid-shaped spikes.

Nowadays, Rally Sweden is contested using adapted versions of “gravel” tyres, fitted with 384 spikes that protrude by 6.5 millimetres. The rest is down to the set-up of the car, explained Didier Clément, Chief Operations Engineer for the DS3 WRCs: “It’s the different road surface conditions that make life complicated for the technical team. If you drive on fresh snow, the spikes have trouble getting any bite and the car tends to weave around on the road. Sheer ice is the ideal surface, with exceptional grip. The lines are very precise and braking is very effective. On frozen gravel and dirt, the spikes break and the tyres are no longer effective.”

In adjusting the differentials and suspension, the Citroën Racing technicians have an almost unlimited number of combinations they can use to offer their drivers the best set-up: “The DS3 WRC is very sensitive to changes,” added Didier Clément. “We need to do a lot of work before the rally to prepare for all eventualities. We are used to saying that this rally is won and lost during testing. You need to define a consistent set-up, so that the drivers can go for it right from the word go. On such a quick course, it is very difficult to make up a gap of more than a dozen seconds.” 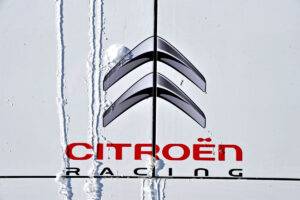 Back in 2006, a young 18 year-old driver made his WRC debut at Rally Sweden… Since then, Mads Østberg has in particular racked up three podium finishes at this round in the last three years.

“I was a little afraid before starting my first rally in the WRC,” recalled Mads. “To be honest, I hadn‘t driven in that many events before I found myself in the big time. But I just had to learn as I went along, because I was determined to get to the top level. It is important to have dreams… I have always set myself goals. I have achieved some of them, but there are some others I have yet to achieve!

After finishing fourth in Monaco, the Norwegian took part in the Mountain Rally, an event in his national championship: “It was a good opportunity to learn about the car, get used to it and work with the WRC winter tyres. It was a bit like preparation for the two days of testing scheduled before the rally.”

Having finished second in 2011, third in 2012 and 2013, great things are expected of Mads Østberg by his supporters in Sweden and Norway: “It’s one of the most important races of our season. The aim is to finish on the podium. If everything goes well, I want to try and fight for the win. We’ll have a lot of fans cheering us on alongside the roads. And although I am very focussed on my racing line, I still notice our fans waving the Norwegian and Swedish flags!”

Fresh from their podium finish at Rallye Monte-Carlo, Kris Meeke and Paul Nagle expect another big challenge in Sweden. In fact, the British crew have the daunting task of tackling Rally Sweden for the first time ever. “I’ve never competed on any rally on snow,” admitted Kris. “It will be a new experience for me. At least the team know what kind of difficulties I will be up against. I am going to concentrate on learning and forget about the actual result.”

“I know I’m quick on tarmac and gravel, but I have no real idea about how I’ll manage on snow,” continued the Northern Irishman. “During testing, I’ll sit next to Mads to watch how he drives. And then it’ll be down to me to learn about everything: the car, the tyres, and so on. Our rivals have a lot more experience than we do. They will undoubtedly go very fast. I’ll just have to put that out of my mind so I can learn and progress at my own pace. And above all, avoid making any mistakes.”

This year, Khalid Al Qassimi and Chris Patterson have decided to make the Middle East Rally Championship (MERC) their main objective. However, the Abu Dhabi will also be competing in four rounds of the WRC. His season kicks off in Sweden in conditions that will be diametrically opposed to those of his native Abu Dhabi. And yet he has some fond memories from the first of his four appearances in Karlstad: “I wasn’t really happy with my performances. I therefore decided to push myself to the limit and set myself the challenge of taking Colin’s Crest flat out. And believe it or not, I won the prize for the longest jump that year!”

“I haven’t driven the Citroën DS3 WRC since last year’s Rally de España,” he continued. “I’m pleased to be able to call upon the experience of Chris Patterson this season. He will be a real asset in helping me to secure some good results.”

BETWEEN SWEDEN AND NORWAY

Over four days, the competitors must cover a total of 1,583 kilometres. 24 special stages are set to be completed, serving up a total of 324 kilometres of timed sections. The rally will get underway in Karlstad on Wednesday, 5 February at 8.04pm with a 1.9km-long super special stage held on the city’s racecourse.

The next day, the crews set off from Karlstad on an 85 kilometre-long road section taking them to the Hagfors service park. After a fifteen-minute service period, the competitors will cross the border into Norway. On their way, they will tackle a brand new stage, due to finish in Torsby ski stadium (7.03km). The rest of the rally will be staged on the other side of the border, with two loops on Kirkener (7.16km) and Finnskogen (16.82km), just the same as last year. There will be no service period until the crews return to Hagfors at the end of the leg, after a second night time run on Torsby.

On Friday, the action will take place to the east of Hagfors on stages used in 2013: Lesjöfors (15km), Fredriksberg (18.15km), Rämmen (22.76km) and Hagfors Sprint (1.87km). A thirty-minute service period will divide the day into two parts. After another 45-minute break in Hagfors, the crews will head back 85 kilometres to the south for a second run on Karlstad racecourse (1.9km) from 7pm onwards.

The final leg will be held on roads around Hagfors with two loops on stages that are well known to mainstays of the WRC. Racing will resume shortly before sunrise on Hara (11.32km). This will be followed by the Torntop (19.26km), Vargasen (24.63km) and Varmullsasen (15.87km) tests. The second run on Varmullsasen will be the Power Stage.

The rally is scheduled to finish on Saturday in the centre of Karlstad, from 5.27pm.