Photo rally: Not so snowy Sweden and one photo to rule them all

Hyundai? Again? Yep. I do apologize and I truly am sorry, but this image had the same effect on me as the one I picked to “win” in Rallye Monte Carlo photo shootout. I really wanted another team to top the standings this time around, but in the end I saw more competitions within teams, multiple photos fighting hard for a chance to end up being selected for this prestigious… selection. For example, in M-Sport selection there were some great slave-flash photos, or the frontal image of Pontus Tidemand’s car with headlights shining directly into our eyes. In Citroën there were also several images to choose from, my favourites being the twisty section of the road, no spectators, just car and the stage (another team had similar photos so I assume it’s a popular snappers spot), also interesting atmospheric images showing cars surrounded by deep Swedish winter. Volkswagen was traditionally loaded with all imaginable angles, but I had to dig deep to find an image which stood out from the rest of them.

But for Hyundai it was this image and this image alone. I toyed with an idea of ditching the 1-image-per-team scheme and go with just 1 image per event, but that idea died very very young. Then I thought about reshaping that “rule” to allow for more images from single team, yet that sounded rather silly. In the end, it’s good that I did not pick either of the two – the more images here, the better, and since all teams are competing, let’s honour them by showing the best photos from their archives. With regards to Hyundai, this is the one photo that ruled them all and I knew it the day I saw it – even though there were few very strong challengers in house. Juho Hanninen’s jump at Colin’s Crest Arena is one of the alternatives, but as exciting as that image is, I didn’t think it was better than the winner.

Just as drivers and co-drivers had to be very creative this year in Sweden, photographers also supplied huge amount of creativity and imagination – from always interesting multiple flash setups, counter-light angles, slow panning photos, close-ups showing the real conditions in Sweden, meaning gravel and no snow, etc. One fine day, and soon I hope, Canon EOS 7D will be mine, my own, my precious, but that alone won’t make me an artist and WRC can be bloody proud of the artists which are taking images and documenting current era of the sport. As exciting as it is to cheer for a team or a driver and to enjoy the competition, I am very happy to see sport being photographed by artists of different styles.

The Winner
Juho Hanninen and Tomi Tuominen had an eventful event in Sweden, but this image does not show it. Rally photographers often strive to present the sport for what it is – extremely exciting and dynamic form of spending fuel, trashing tyres and entertaining huge amount of people. But in this photo there are no people. In this photo there is no sound. Yes, there is motion, but it can be compared to horses running through deep snow – you’ll see movement, but sounds and noises will be muted, muffled, minimized. This photograph grabbed my attention the moment I saw it not with how dynamic it is, quite the opposite. It’s serene and peaceful and, as I said, almost quiet in its whiteness, trees and houses barely visible in the background. Minimalism works in this case, and it works beautifully. Just look at it! Open it in big format and look at it. Does it not make all the jump images a bit “yeah, rally cars jump… a lot”? This particular image looks like a painting, with its almost monochromatic background brought to life so subtly by million euro state of the art rally car driven angrily. 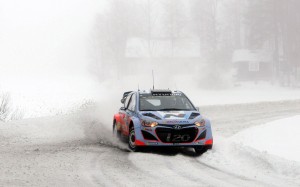