One of the biggest stories and topics this year must be the arrival of the new factory team. Last year’s runner-up Thierry Neuville decided to join Hyundai and embrace a very unique challenge of being part of a brand new team – his decision was one of the hot topics last year and for a good reason. For now, Hyundai is right where we expected it would be given the amount of development and testing they were able to do last year. Team’s number one driver is looking forward to each new event and each new opportunity to drive the car and test the new developments; not surprisingly, Thierry says that each special stage is huge in terms of data gathering and understanding of the car and its potential. The pace of development is the key thing for the team and solid results, also known as podium finishes, are not mission impossible later in the year. Despite his young age (25), Thierry commands very solid experience and, well, finishing the 2013 season second to Sebastien Ogier says enough about his driving skills. I always wanted to ask him a question or two and now, thanks to a wonderful Hyundai PR team, some of those questions made their way to Mr. Neuville. Sadly, I did not ask him about the rumour linking his glasses and i20 WRC headlights, but we already know all about that, right?

There are always questions that do not make it into interviews such as this, but that’s the curse of e-mail “conversations”. I am very strongly considering the idea of telephone interviews in the future, but I am afraid I won’t be able to stop grilling drivers once I get going. You understand me, don’t you. These guys have pretty awesome jobs, don’t you think, how do you not ask them ALL THE THINGS, if you get the chance.

Here’s what Thierry Neuville shared with World Rally Blog as the team prepares for round three of the 2014 World Rally Championship, Rally Mexico. Big thanks to Hyundai PR team, Nicoletta Russo, and to Thierry, of course.

Thierry, new team and a new car for you this year. What were your initial impressions when you first drove the car and how did it improve over time?

I was quite positively impressed the first time I drove the Hyundai i20 WRC back in November 2013. Having driven in the last two years with cars which have been competing in the WRC for several years, of course I noticed some differences and some things which needed to be improved in the i20 WRC. But – at the same time – I also found some interesting features for a car that was only developed for six months before I first drove it. The car was already at good level in terms of speed, chassis and of development in general. There were the first positives I noticed in the car which we continued to improve over the following months. There’s still some room for improvement but I can say I feel more and more confident with the Hyundai i20 WRC. 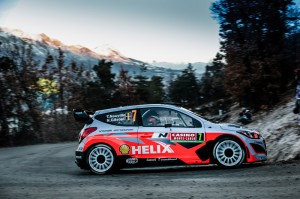 This is the third WRC car in as many years for you. What are the main differences between those cars (no need to name cars)? WRC community seems to think the suspension is the main area of interest these days.

Not going too much into details I can say that one of the cars was for sure very good and easy to drive on Tarmac, while the other one was definitely better on gravel. I haven’t tested the Hyundai i20 WRC as much on gravel yet (our first test was this week) so I can’t fully compare but I would say it’s a mix of the two cars I previously drove.

We often hear about cars being built around drivers – did you need to change your driving style when you met i20 WRC?


I wouldn’t say so – so far, together with the team, we have been developing the Hyundai i20 WRC trying to adapt it to the needs and driving styles of myself and of the other drivers.

You’re not only a car expert but also a team expert – how ready is Hyundai Motorsport compared to long-running WRC teams you’ve worked with?

Of course everything is still new for the Hyundai Motorsport team and there are still things which need to be done for the future but we have already seen big improvements after the first two rallies of the season. We just need some final touches and I’m sure that in a couple of events we will be where we need to.

Monte Carlo retirement was a bitter disappointment I’m sure, but are you secretly proud of that split time? Many Hyundai fans are!

No, not really. The conditions at Rallye Monte-Carlo change continuously – even on a single stage – and the tyres’ choice plays a significant role so a single split time doesn’t really mean too much. 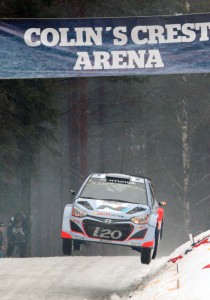 Do you think Hyundai can exceed some expectations on certain events this year and if so, which ones?

I think that later this year we could aim for some podium finishes, this is one of the objectives we can look for during the second half of the season – of course depending on the level of development we can achieve in the upcoming events. We already showed some positive things in Sweden.

Do you think testing & development is better done in competition as opposed to what Volkswagen did during 2012?

I think development should be a mix of both test sessions and rallies. On event the team can work on a rally-mode environment, dealing with the short timings, the regulations and a level of pressure which you will not experience during a test. While test sessions are useful to try different solutions on the car and develop it in different conditions and terrains.

You finished 2013 in second place and with 2014 dedicated to development can we expect you to launch the title assault in 2015?

In your opinion, what can be done to help young drivers to climb through the ranks toward modern day WRC?

It’s not easy to climb the WRC ladder but there are a few good projects which are trying to help young drivers to do so. One option could be to start with the Junior WRC and then make your way to other categories before arriving to the WRC. Otherwise the ERC is also a good launching platform before stepping up to the WRC. 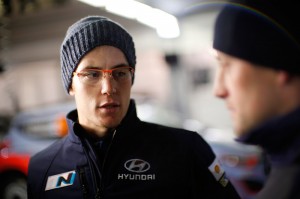 Colin McRae Rally – I never played the other ones. Subaru Impreza, the Delta is not really a car of my generation so I don’t know it very well.

The best stage, the best rally and the best driver you always wanted to drive against on the stages?

The best stage for me is Ouninpohja at the best rally is Finland. Nowadays I think I’m driving against the best drivers. I’ve driven against Seb Loeb and I’m currently driving against Ogier and some very good other drivers.

Geko Ypres Rally celebrates 50th anniversary this year and WRB’s friends tell us there will be other events in the area marking the 100th anniversary of World War I – can we hope to see Thierry Neuville on the stages of what promises to be a very special Ypres Rally?

Unfortunately I will not be competing in Ypres but for sure I will be at the event to comment the stages live for Eurosport.

Thierry thanks a lot for your time and best of luck in 2014! Thank you!