Two rallies down, many more to go. It may be too early to analyze things, but I don’t think there is such thing as too early when it comes to rally. Every stage and every competitive (and testing) kilometer counts. One team knows all, and I mean ALL about experience, importance of testing, development and growth and this year they combine all that and plenty of ambition with Mikko Hirvonen and Elfyn Evans as their lead drivers. The team is M-Sport World Rally Team, still here, still strong, still stubborn and determined. Title sponsors came and went but team, led by Malcolm Wilson, endured and persevered. Of course, it helps to have one hell of a car, coupled with equally impressive customer car programme and development. Two odd events in Monte Carlo and Sweden are not exactly the best measure of performance, pace and potential, even though it would be silly to dismiss them. Because points. But from Mexico onwards we should be able to compare teams and their new lineups a bit better. Many people say that Hirvonen and Evans are one killer combination and I do agree. For this particular interview, or should I say Q&A, I wanted to ask them a few short questions, just to see what they’re up to and also learn few more things about the guys we follow so closely throughout the year. So here it is, six pack of questions left WRB office and was very promptly returned back with replies attached. Big thanks to Anna Louise Rudd for swift response – goes to show speed is a virtue in this sport. 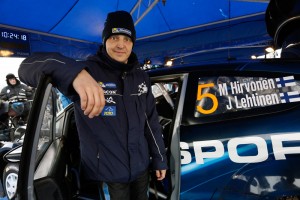 1. Please rate your season so far.
On a scale from one to ten, I would say a seven. Monte wasn’t our rally, but in Sweden we were getting back up to the pace we wanted. It’s still not quite where we want to be just yet, but I’m getting more and more confident and I hope that we can be even faster when we get back to gravel.

2. Oversteer or understeer?
Neither!

3. Ideal birthday present for your co-driver?
Jarmo is a huge ice hockey fan so I would have to buy him some tickets for an NHL game, and after that, tickets to see ACDC live.

4. Best thing about your team?
The team is full of really nice people to work with. They’re all really dedicated and always smiling, but most importantly, they all have the same ambition as me… they all really want to win!

5. If you could, which aspect of the modern WRC cars would you change and why?
That’s a difficult one as the cars are pretty good as they are. Maybe if we could change some of the regulations for the engine and the aero? We would have more power and we would be able to go much more side-ways. That would be fun!

6. Which event are you looking forward to and why?
Finland is always Finland! It is the rally of the year for me. Of course it is my home event which is always special, but the stages are incredible and you don’t get an atmosphere like it anywhere else in the world. 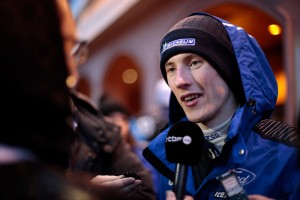 1. Please rate your season so far.
I think we can be pretty pleased with the job we have done so far. This is a development year for us and I already feel as though we have learnt a lot after just two events. If someone had told me that I would have finished sixth on my Monte debut, I would have taken it straight away! Obviously it was a little disappointing not to have made the finish in Sweden, but looking back now I think we can be satisfied with that event too – we made it through the majority of the stages and learnt a lot in what were really tricky conditions. I’m really relishing these new challenges, and I can’t wait for the next one in Mexico.

3. Ideal birthday present for your co-driver?
Dan is a massive Burnley FC fan so it would have to be a season ticket. He would deserve it too – he puts so much effort into everything he does – he would just have to sacrifice the odd game if it clashed with a rally!

4. Best thing about your team?
I’ve been with M-Sport a long time now and one of the best things has to be the family atmosphere. Everyone gets on really well and looks out for one another. There is a lot of mutual respect and every driver is made to feel right at home. Also, everyone has a real ambition to win. We’re all working towards the same goal and that is very important.

5. If you could, which aspect of the modern WRC cars would you change and why?
Well, the modern world rally cars are a lot more powerful than anything I have ever driven before so it is difficult to say! Regulations mean that the cars aren’t as powerful as they were in the past, so if I had to say something it would be that. To be able to drive a car like the ones I grew up watching would be pretty cool.

6. Which event are you looking forward to and why?
Wales Rally GB. I have a lot of home support so I cannot wait to drive a world rally car in front of the home fans. It’s the rally I know best, and as the last event of the season, we will have had a full year of development with the Fiesta RS WRC. It’s hard to predict what we would be capable of, but I am looking forward to it all the same.