Jari-Matti Latvala: “I ain’t afraid of no Seb!”

After reading this interview I think I understand a bit better what it’s like to be Jari-Matti Latvala these days. Remember how we sort of joked on his account when he was talking to himself after some bad moments, even arguing. We also felt for him when he seemed to be under so much pressure at the end of each stage. The fact is, whenever reporters at the stage end shove their microphones into driver’s faces, they (the drivers) usually squeeze out a sentence or two and that’s it. But when JML arrives at the stop control, he will not only tell you that “driving was OK” and that he thinks “the pace was good”. No. Jari-Matti will tell you ALL about EVERYTHING, if you (and him) only had enough time. I am sure he is perfectly capable of describing the behaviour of each individual tyre on the car, he can also provide you with the tiny differences in suspension response over various bumps and crests. And don’t get me started on how deep can he go when analyzing his own driving! That’s Jari-Matti. But if all this sounds like plenty of pressure – there’s more, as this interview reveals.

I really enjoyed this piece, provided by Volkswagen Motorsport. It’s a very interesting interview with genuine questions and honest replies. There are many expectations around each and every WRC competitor, and that’s perfectly normal – after all, this is World Rally Championship we’re talking about. But to list each contributing “pressure” and talk about it, well, we don’t get that very often. Some pressures are real, some maybe not, but the line between the two is very fine indeed. From my perspective some things JML lists as “pressures” may sound like overreacting, but I’m not the one sitting in a championship winning car, bearing the hopes and expectations of sponsors, team, fans… entire world. We have all the right in the world to expect only the best from drivers. And we also have all the right in the world to slap them silly when some of them start being a bit whiny or primadona-y (not saying JML is like that, but this is something that happens in motor sports at times), but on the other hand, being what they are and performing on the level they perform takes a lot of everything.

They are, most of them at least, human after all.

Jari-Matti Latvala, congratulations on your first victory of the season. How do you feel after this triumph?


“The victory in Sweden was a special moment for me. It’s the only rally in the WRC that I have won three times. It was also in Sweden that I celebrated my first WRC victory in 2008. However, there were also some critical moments during Rally Sweden. For example on the Friday when I lost time during the ‘Hagfors Sprint’ stage and Andreas [Mikkelsen] came dangerously close. But on the Saturday everything went to plan and we clinched the victory. I was absolutely ecstatic after Rally Sweden.”

Do you know what you have in common with Björn Waldegård, Stig Blomqvist, Tommi Mäkinen, Kenneth Eriksson and Marcus Grönholm?

“Let me think about it quickly. I think we have all won the Rally Sweden more than two times. That truly is esteemed company.”

It is difficult to master a WRC event like in Sweden. How then do you manage to win such a complex rally?

“It all comes down to strategy. In 2008 the conditions were similar – a lot of gravel amongst the slushy snow and ice runs. Conditions like these seem to suit me. If you were to compare a rally like this with an asphalt rally, then there would be huge differences. You have to keep calm in Sweden and drive a clean line. I also had problems with this at the start in Sweden, but over the course of the rally I managed to get this under control. I would also like to stress that Volkswagen gives all their drivers an equal chance. Each of us has the opportunity to fight for the victory – no team orders in sight. This is reflected in the atmosphere within the team. The team has simply worked great.” 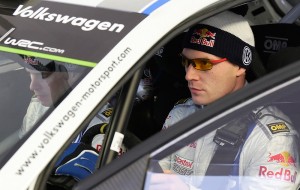 The first gravel rally of the season in Mexico is fast approaching. How are Volkswagen preparing for it?

“We’ve spent two days in Spain preparing for Rally Mexico. I was behind the wheel one day and then Sébastien the next. Séb adjusts to new conditions incredibly quickly. Quicker than me. I need a bit of a warm-up on gravel. Therefore I often use the shakedown to get used to the road surface. This was exactly the case during Rally Great Britain last season. If I haven’t been on gravel for two months then I notice it straight away.”

What are you expecting from the Rally Mexico?

“Of course the win has given me extra confidence. At the same time when you’re in first place, you have to be a realist. In Mexico, if you allow yourself a mistake then your chances of victory are slim. I travelled to Mexico in 2012 fresh from victory in Sweden. At the time I had a great feeling about the Rally Mexico, then I was unfortunately forced to retire. You have to see that you pick up as many points as possible. It’s not my strongest rally but of course a victory is possible, however, it’s not my main aim. Even a podium finish would be super.”

You are the new WRC leader. Is there now a big battle going on between you and Sébastien Ogier?

“I hope so. But one thing is certain: Séb will be damned hungry for victory in Mexico. Of course I would also like to become world champion. That is my great ambition. For that you need a perfect overall package and I’m working on that. But there are also other drivers, who share this dream, therefore for the time being we’re just concentrating on one rally at a time. Séb is really strong. If anyone wants to beat him, they have to perform consistently at their best, on all surfaces.”

What were you thinking during the Rally Sweden when Sébastien Ogier made a mistake?

“He’s only human too. Sure, if you visualise the previous season, then you’re given the impression that Séb never makes mistakes. I’m convinced that every driver sometimes makes a mistake during a rally. Again, we are all just humans.”

“As a driver it is natural to look at the performances of your team-mates. When Séb was so fast last year, I found myself under more pressure. Despite this I think that we are professionals and know how to handle pressure.”

Are you afraid of Sébastien Ogier?

“He’s a very strong driver. Also mentally. He’s at home on all surfaces. He is certainly difficult to beat, but despite this you should never have fear. If you are afraid, then you won’t achieve anything. You can have respect for other drivers, but never fear. As I mentioned earlier, if you want to win the world championship, you have to deliver consistent performances.”

This season you are working with a mental coach. What has changed for you because of this?

“I listen to my feelings more. In the past I wanted to win some rallies at all costs. Then everything often went wrong and I wanted too much. In moments like these my self-confidence was zero. My mental coach has taught me that you have to listen to your feelings. If this is not ideal, then it is better to switch down a gear. Another thing is that I now communicate with Miikka, my co-driver, considerably more. Now we have a strategy, a plan. Our teamwork couldn’t be better. He intervenes when I sometimes want too much. That wasn’t the case at the beginning of our career together.” (laughs)

Was it your idea to work with a mental coach?

“It was the team’s idea. The team came to me and thought that I could improve in this area. Christopher became my mental coach during the Rally Great Britain and since that time I have come to trust him one hundred per cent. I learnt from him how to place my focus on something and when I lose my focus, how I can get it back. Also, I was sometimes a little too excited ahead of a rally. He’s taught me to approach a rally in a more relaxed manner. I don’t want to go into too many details, but I’ve mostly managed it through relaxation and concentration exercises.”

Volkswagen have dominated recent rallies. Do you believe this domination can continue on gravel?

“There are four manufacturers in the WRC. When I look at Hyundai, then you have to say that they’ve made good progress already, but they still require a little time to reach the top. Volkswagen were able to gather a lot more experience ahead of their debut. But I’m certain that one team or another will still shine this season.”

Your compatriot Marcus Grönholm was World Rally Champion in 2002. Is it not high time for another Finnish world champion?

“It puts a bit of pressure on me that it’s been twelve years since a Finnish driver was world champion. A Finn has been World Rally Champion off and on when spread over the last 20 years. In Finland the people already have high hopes for me, even if rallying has lost a little of its popularity. If I were to win the title, then the popularity of the sport in Finland would be sure to increase.”

You are a big fan of Henri Toivonen. Would you also like to become world champion for him?

“There are a few parallels between Henri’s career and mine. He won his first rally as a young driver and then got more and more experienced. In 1986, the year he died, he won the Rally Monte Carlo and led Rally Sweden for a lot of the way. He had a super start to the season. Even though he is my idol, it’s not the case that I want to become world champion for him. For me he was the bravest driver of his era. Nobody was able to drive a Group B car like he was. Sometimes he just wanted too much.”