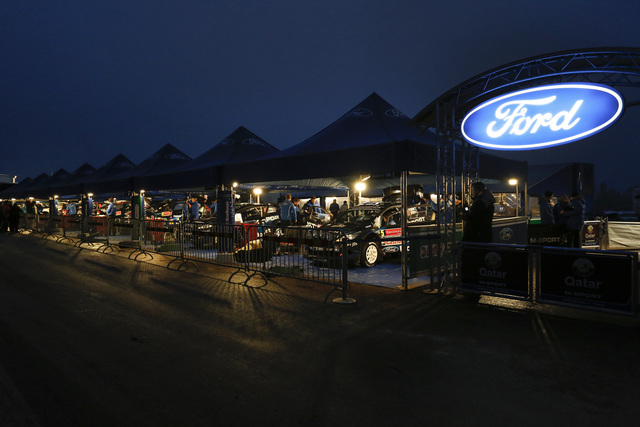 Long stages, high temperatures, demanding altitude – that more or less sums up every preview of the upcoming third round of the season in Mexico. M-Sport World Rally Team preview is no different, explaining why engines will produce less power in Mexico and why not all gravel events are the same – not many of them have special stages with sweet, almost chocolatey sounding names. Yet these very stages are actually pretty bitter and very taxing, being 40+ kilometers in length.

For M-Sport WRT crews Rally Mexico is a good opportunity to put some of the well known Fiesta RS WRC performance to good and also effective use. M-Sport’s very interesting combination of drivers already provided some of the most exciting performances this year so there is much to look for in Mexico from Mikko Hirvonen and Elfyn Evans. One of them is Rally Mexico veteran and the other is very much looking forward to unleashing some of his gravel surface expertise. Despite this being the first ever Rally Mexico for Elfyn, he is a very quick learner according to many sources. Long Mexican stages should allow him to really get to know Fiesta on this particular surface and also to experience the various setups. I’m not saying this entire rally will just be one big test for Elfyn, but it will. From his statement below you can see young Mr. Evans has done his homework about Mexico, all the bits of information are here, now it’s time to see what all this info means in a real life event.

Mikko is, as I said, one of the veterans of this event. Eight starts, plenty of podiums, it seems the Finn understands Mexico very well. It’s not a typical event, if such thing even exists, and Mikko proved over the years that he knows how to thread his powerful 4-wheeled horsie around rocks, boulders and desert shrubbery. To avoid mistakes, but also to be able to correct them if need be on long stages is all Rally Mexico is about for Mikko. Is this the year in which he can finally clinch the top step of the podium?

Here’s what Elfyn and Mikko said ahead of Rally Mexico.

“Jarmo [Lehtinen, co-driver] and I have done well here in the past so hopefully we can continue that this year. I wouldn’t say that there was necessarily a key to doing well here. Like all events, you just need to avoid mistakes.

“The altitude makes a big difference in terms of performance. You don’t have as much power so you need to consider that and it does inevitably alter your driving. The crucial thing is to carry the speed through the corners as you can’t gain it back so easily on the straights. But as you’re trying to go flat-out through every bend, you need to be careful as sometimes that can take you by surprise.

“We’ll also see some really long stages which I enjoy. It’s a nice change as we don’t see them so often anymore. It’s a good challenge for a driver as you need to be really focused and keep concentrated, but even if you make a small mistake you have the opportunity to make it back.

“Hopefully we’ll be on the pace in Mexico. We had a good event in Sweden, but we weren’t quite there so let’s try again and see what we can do.”

“This event offers another new experience. I’m not sure of exactly what to expect, but I have a good idea from the test.

“It’s important to drive a very smooth line and carry good speed into the corners as the lack of power makes it difficult to recover any time loss. For us, we just plan to drive as smoothly and as cleanly as possible – to gain the experience and gradually improve our pace throughout the weekend.

“I’ll also be tackling some of the longest gravel stages of my career. I’ve certainly never had to contend with so many long stages in a single event, but I am looking forward to the challenge. We’ve done a lot of preparation on the physical side, so hopefully that will prove effective and we can concentrate on looking after the car and setting some good splits.

“We’ll also witness some more consistent grip levels to those we have had to contend with so far this season. Our progress rate will be more constant, and it will be easier to build the pace stage by stage without having to adapt to the changing conditions.”