One winner, one newb, much ambition – Citroën looking forward to Portugal 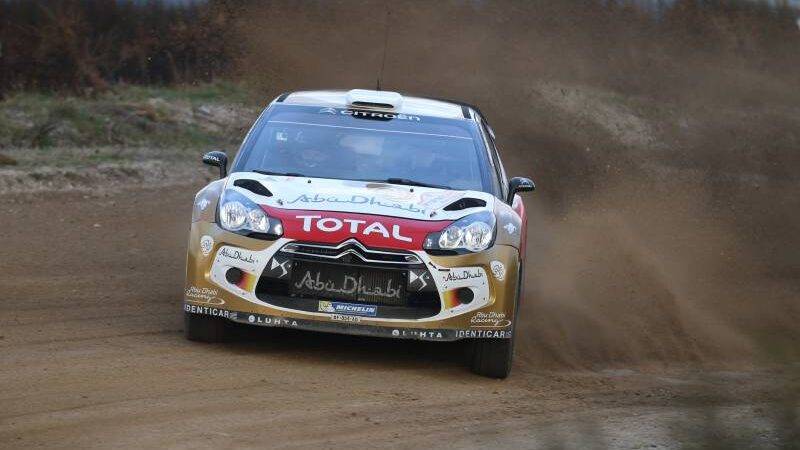 Remember the “huge” scandal which involved then-Citroën now-M-Sport driver Mikko Hirvonen and then-privateer now-Citroën driver Mads Ostberg? Maybe you don’t because scandals are really tiny in World Rally Championship, they don’t stir too much drama and generally we just forget all about them in next couple of weeks or months. In 2012 Mads Ostberg inherited victory in Portugal after Mikko Hirvonen was disqualified, but even if that win can be seen as a “gift”, it still counts as one heck of an achievement (after all, he wasn’t promoted from 10th to 1st, he DID finish the event in second place) and it actually means Mads is one of the favourites for the win this year. Mads did get a taste of what he and the DS3 WRC can achieve when he challenged for the top spots in Mexico, but in Portugal they will really need to think about points, despite the ambitious predictions. Mads says he feels “mentally ready to fight at the front”. Now, how many times we’ve heard that from Jari-Matti Latvala prior to his recent mental reboot.

For Kris Meeke this season must really feel like a very odd affair. He’s got the speed and the raw pace, he’s got experience and knows how to rally, but on the other hand he is handicapped by being a first-timer. Same thing awaits him in Portugal, but if anything, Kris learns very fast and then drives even faster. Sometimes a bit too fast or a bit too soon, but speed in rallying sometimes take time and persistence to fine tune, especially if in a new car, new team and on a new terrain. The disappointing retirement on the last stage in Mexico could make him a tiny bit slower or more careful. Though, I don’t think these guys really know how not to push. For Citroën’s sake, I hope both Kris and Mads bring some results home, but for the sport’s sake I hope they just do their best out on the stages.

Offical preview follows below, and again, it’s a very interesting read so do read.

ØSTBERG, MEEKE AND AL QASSIMI ALL IN DS3 WRCS AT PORTUGAL

Like in Sweden, three Citroën DS3 WRCs have been entered by the Citroën Total Abu Dhabi World Rally Team for Rally de Portugal.

Mads Østberg/Jonas Andersson, winners here in 2012, and Kris Meeke/Paul Nagle will be eligible to score points towards the Manufacturers’ standings.

Currently second in the FIA Middle East Rally Championship, Khalid Al Qassimi and Chris Patterson will be taking part in the second of the four WRC rounds that make up their 2014 programme.

CITROËN AND RALLY DE PORTUGAL: FROM THE DS21 TO THE DS3 WRC…

In 1969, the World Rally Championship had yet to be formed. However, the top drivers of the time were already competing in Portugal. In a Citroën DS21, Francisco Romaozinho and ‘Jocames’ were the first of five local crews to win on home soil.

Since 2003, Citroën has racked up six wins. Initially, success came in the national championship with Armindo Araujo and Miguel Ramalho (Saxo kit car) and then in the WRC, with Sébastien Loeb and Daniel Elena (C4 WRC) and Sébastien Ogier and Julien Ingrassia (DS3 WRC).

Mads Østberg and Jonas Andersson, at the time rivals of the Citroën crews, also won in Portugal in 2012. They prevailed after Mikko Hirvonen and Jarmo Lehtinen were disqualified in their Citroën DS3 WRC, despite leading from the first stage to the last.

THE CHALLENGE OF FLAWLESS OPERATING

In 2007, Rally de Portugal returned to the World Championship calendar. Relocated to the Algarve, it is now one of the most controlled events for the various teams.

Over the years, the route has changed very little. Didier Clément, Chief Operations Engineer for the DS3 WRCs, explained: “It’s pretty standard for the gravel rallies in the championship. A car that is quick on gravel will inevitably be competitive in Portugal.”

However, one specific factor can change everything, the weather: “Depending on the conditions, the level of grip can go from one extreme to the other. If it rains, the gravel turns to mud and the surface becomes very slippery. Being first on the road then becomes an advantage. If it stays dry, it is very hard on the tyres because wear is a very important aspect. And in that case, it is preferable to set off last.”

The new rules mean that the running order is fixed for the first leg. Mads Østberg will be running in third position and Kris Meeke will be seventh on the road.

“We can no longer choose our strategy like we could before with the qualifying stage,” added Didier. “We will therefore need to make the most of the data provided so that our drivers can express themselves fully. If you make a mistake on tyre choice, it’s not unusual to lose a full minute on a loop. If there is heavy rain or hot sunshine, it can be all over very quickly. But when conditions lie somewhere between these two extremes, it’s a lot more complicated.”

“Each part of the ground reacts differently to any water. And as the road surface is not uniform, you have to be able to adapt. We’ll use all our experience, and that of the drivers, the recce in which the engineers take part, information from Michelin and the weather data that we have when choosing the tyres. It’s a real team effort, which should ensure our drivers enjoy the best solution on the stages.”

In 2012, Mads Østberg and Jonas Andersson won their first WRC rally in Portugal. The Faro-based event is therefore somewhat special for the Norwegian and the Swede. “There are many events I like in the WRC, but Portugal is one of my favourites,” confirmed Mads. “In 2012, we were awarded the win after the finish. To be honest, it was a little disappointing to be declared as the winner of a rally after the podium. Now I really want to win so that, finally, I can climb onto the top step.”

“I always have a good feeling on these roads. Last year, I was leading at the start of the rally before going off. I feel capable of fighting at the front. But the conditions are often very difficult here. You have to think about a lot of factors. It is one of the roughest gravel rallies now that the Acropolis Rally is no longer on the calendar. You have to look after the car and monitor tyre wear. The type of roads here also provides difficulties with plenty of blind corners, lots of changes in ground level and very few visual landmarks. You need to take very accurate pace notes.”

Third in the World Championship standings and having won five stages in Mexico, Mads Østberg is setting his sights high: “We have shown that we are quick in the Citroën DS3 WRC. That was confirmed in our recent tests. Mentally, I’m ready to fight at the front.”

ANOTHER NEW RALLY FOR KRIS MEEKE

Although he has already taken part in 43 World Championship events, Kris Meeke will be making his first appearance at Rally de Portugal. Like in Sweden and Mexico, the Northern Irishman is aiming to add to his experience.

“Yet more new stages for me!” smiled Kris. “It looks like it will be a very interesting rally. After Mexico, driving the Citroën DS3 WRC in testing helped to boost my confidence. At sea level, the car has significantly more power and there is a lot more grip on this type of road surface.”

Quick in Mexico, Kris Meeke showed he was capable of matching the pace of the leaders on gravel: “After speaking with the team, I know that this rally can be particularly complicated. For my first appearance here, it won’t be easy. I feel a little bit frustrated after Mexico. I need to rack up more miles in the car and that will be my main objective in Portugal. If I can keep out of trouble then inevitably, the result will look after itself. What I need is to be consistent. Our last test sessions went really very well and I felt very comfortable in the Citroën DS3 WRC.”

Having finished on the podium in the first two rounds of the Middle East Rally Championship, Khalid Al Qassimi is back in the Citroën DS3 WRC in Portugal. The Abu Dhabi driver has already competed at this event four times, finishing in the top 10 on three occasions.

“I can’t wait to start my first gravel rally in the WRC this season,” emphasized Sheikh Khalid. “We’ll have to try and keep out of trouble throughout the rally, whilst also paying particular attention to the tyres. I feel good in the Citroën DS3 WRC. I hope that our pre-rally tests will enable us to find the right set-up so that we can set some good times.”
FAFE RALLY SPRINT: THE PERFECT APPETIZER

A few days before recce starts, many of the leading contenders in the World Championship will be taking part in a separate event. The Fafe Rally Sprint, held on roads formerly used to stage Rally de Portugal, will give many tens of thousands of spectators the chance to see the WRCs in action in the north of the country. Mads Østberg and Kris Meeke will share a Citroën DS3 WRC this Saturday, 29 March during this non-championship event.

FROM ESTORIL TO FARO

Estoril returns this year to the route of Rally de Portugal. The city, the starting point of the rally 39 years ago and equally a former F1 Grand Prix venue, will this year host the start of the rally on Thursday, 3 April at 3pm.

After the ceremonial start, the crews will travel the twenty kilometres or so to reach the capital, Lisbon, where a 3.27 kilometre super special stage will be held in the evening. A long 288 kilometre road section is then scheduled before the cars enter parc ferme at Algarve Stadium.

On Friday morning, the drivers will set off in the same order as the World Championship standings for a loop of three stages, each run twice, split by a thirty-minute service period starting at 1.30pm.

The stages are already familiar to the majority of the drivers. Silves (21.50km), Ourique (25.04km) and Almodovar (26.48km) will determine the standings on day one.

On Saturday, the WRC crews will run in reverse order, according to their position in the overall standings. Like the day before, the crews will complete two runs on the three stages, with a pause for the midday service.

After Santa Clara (19.09km), the longest stage of the rally, Santana da Serra (31.90km) will be run in the opposite direction to previous years. The loop will conclude with Malhao (22.15km) before the cars head back to Algarve Stadium.

The final leg will be made up of three stages, covering only 43.87 kilometres of timed sections. At 8.50am, the crews will set off from Loulé (13.83km), then tackle Sao Bras de Alportel (16.21km) before the final test on Loulé which will also serve as the Power Stage.

The rally is scheduled to finish on Sunday, 6 April at Algarve Stadium from 12.25pm local time.