The rain in Spain stays mainly in… Portugal. Or so it seems. Perhaps that’s actually kind of nice, because two dusty rallies in succession would not be diverse enough, Nature thought. So there was rain. In recce, during the event, not as much as last year, but enough to mess with some pace notes and make tyre choices a bit more tricky. How it all played out? Well, you either know already (duh), or you have some catching up to do, so leave now and come back after you learn all there is to know about the results of 2014 Rally de Portugal. Alright, okay, Sebastien Ogier won, Mikko Hirvonen came second and Mads Ostberg clinched third place, for a nice, colorful podium featuring three different teams. Even the gaps weren’t too huge, yet they weren’t actually small either. Come to think of it, I do sometimes question my desires to have close finishes. Does it even work in rally? Sure, once in a while we do get a thriller with few seconds separating the winner and the los… I mean second placed man, but more often than not you simply cannot expect them to be able to keep the gaps close, keep the cars on the road and at the same time avoid all the mistakes, traps, broken suspensions, punctured tyres…

Anyways, back to the main thing of this post, photographs. Fantastic as usual, with some fresh ideas and some creative angles, but also many missed opportunities. Now, before you whip out your largest and heaviest telephoto lens and start hitting me on the head with it, allow me to explain, dear snappers. Some photographers and teams did a wonderful job of using the available scenery to create the emotions which transcend the usual “here’s a rally car and some trees/spectators/trees AND spectators”. Yet some came close to some really stunning images, but there was always something missing. Like some frontal shots of a car going through a watersplash at high speed. Fill the frame, I wanted to shout, just in one photo do a frontal shot of a watersplash and fill the frame with just a car and not much else. Such images are huge, in my eyes at least, even though they don’t exactly reveal much of the story, they’re often very powerful. Sometimes, in such images, you can see driver or co-driver’s face, which, as we all know, immediately forces you to realize (or remind yourself) that yes, there is a human being steering that car, even though the car looks like it wants to tear its way out of the photograph and into your living room.

Volkswagen gave me hell this time around. Hell! Gigazillion images, I must have had 50 opened tabs in my poor browser, but there was always something missing, a tiny bit, but always something. Maybe the car was dead center in the bottom third of the frame, which to me screams “I’m going to fall out of the photograph soon”. Or maybe it was about dull colours, which is fine if the weather was cloudy, and I applaud them for keeping the images raw and untouched, but sometimes just a bit of saturation or vibrance boost can separate the meh image from wow one. But in the end, it wasn’t really about the colours, something else was missing, or I just wasn’t looking past the usual and most eye catching scenes. Until I spotted the photo I picked to be the winning one – Jari-Matti Latvala and Mikka Anttila tearing through what looks like an epic flood. As for honorable mentions, they’re fantastic, aren’t they? In some of my earlier posts about Portugal I already used some photos I think also belong here, but you cannot put them all, no matter how awesome they are. Citroën (great use of scenery to frame and complete the photos) and Hyundai (the jumps were fantastic and don’t get me started on colours, fabulous work as usual!) in particular did a wonderful job of documenting their adventure in the rain soaked Portugal. Bravo to their photographers!

The winner
Seriously, this photograph just blows all others in Volkswagen’s archive out of the water (do what you like with puns). What I find most impressive is the complete lack of anything dry in this photo. It’s flooded and liquid and wet and it makes you want to grab a towel or a neoprene suit. The grass is wet, the ground is soaked. Trees are partially hidden in creepy haze and this photo looks like a scene from a natural disaster movie. Or at least it would look like that if it weren’t for those few photographers in the back – one look at them and you just know this car was supposed to be here, even though it looks like it’s running for its life, trying to escape the flood. Small consolation, photographers also look wet so that completes the moist feeling from this one. There were fantastic images in all team archives, but this one just captured my attention. Maybe because so many other photos in VW’s archive failed. At one point I seriously considered the idea of ignoring Volkswagen and use two images from another team. Good thing I didn’t because this photo deserves its spot here. Photo by: Bildagentur Kräling. 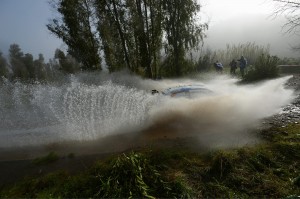