Seat looks back at 30 years of Ibiza, pulls out its rallying career 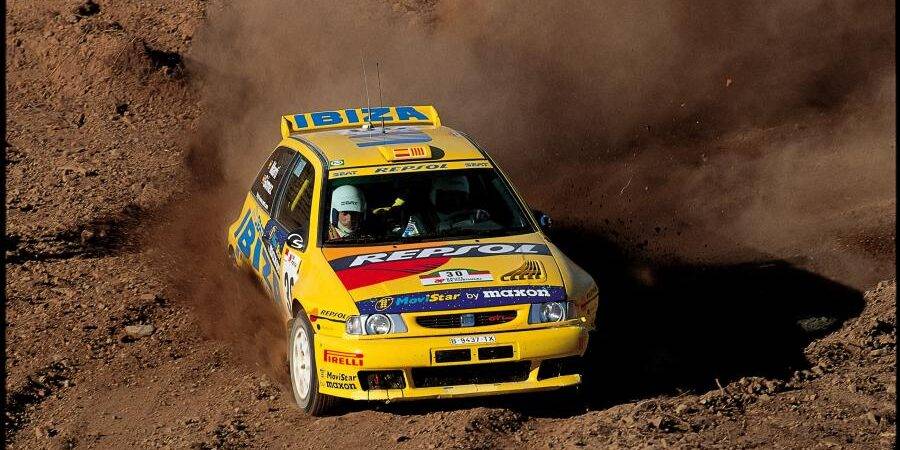 Long long time ago there existed this somewhat odd and somewhat exciting class, called Formula 2, or Formula 2.0, or something similar, basically consisting of sub-2-liter cars with kit car character, competing in the World Rally Championship. Same-ish front-wheel-drive cars also competed in regional and/or national championships, fighting against the “proper” 4WD cars. It was there and then that Seat’s compact, Ibiza, became popular on European rally stages, but also on the world scene as well. This particular class or category was a bit strange, lacked proper promotion and, seemingly, competition, but titles are titles and wins are wins. Those were the years of the HUGE FWD cars, such as Škoda Octavia Kitcar as well as monstrous tarmac eating abominations in the shape of Peugeot kit cars. Seat clinched 2.0 liter category titles three years in a row, and they also tried to do the same in the elite WRC class with Cordoba (which was, let’s be gentle here, very unsuccessful). Ibiza, however, was a proven winner in various events and it’s nice to see some of those successes being mentioned in the official press releases concerning the 30th anniversary of Spanish compact.

The history of the SEAT Ibiza goes hand in hand with competition racing. The Spanish brand’s legendary model has participated at speed events, especially rallies, practically since it first appeared. In fact, SEAT won three world rally titles with the Ibiza Kit Car in the 2.0 litre category, a feat that nobody could have envisioned in 1985 when SEAT Sport was founded as SEAT’s motorsport division. In addition, the Ibiza has been the vehicle of choice of many fledgling racing drivers thanks to the different promotional events organised throughout its long history, and has left a permanent impression on the Spanish championship events. First generation (1985-1988): Ibiza Copa on tarmac and Ibiza Bimotor on gravel SEAT Sport arrived on the heels of the SEAT Ibiza. A year after the legendary model first made its appearance, the brand’s motorsport division was founded, which immediately developed two racing versions around the newly minted car – the Copa SEAT Ibiza for the Spanish Rally Championship’s tarmac race and the spectacular Ibiza Bimotor that surprised everyone on gravel. The Copa SEAT Ibiza made a huge impact on the Spanish Championship, and several racing hopefuls got their training wheels there thanks to SEAT. An affordable B segment version was created for drivers who also received grants and prize money to help incentivise their participation. The Copa spanned the years 1985 to 1988. The first SEAT Ibiza also served as the basis for an interesting prototype to race on gravel at the Spanish Championship. The brilliant solution to compete against much more powerful cars was to install two engines, one at the front and one at the rear to activate both axles, and add the combined 140 hp output of the 1.5 engines to total 280 hp. This imaginative alternative gave Josep María Serviá several wins at different events when pitted against much stronger rivals in those days.

The SEAT Ibiza returned to competition in 1994. The second generation of the successful model, more specifically the 2.0 GTI, served as the basis for a new promotional version to compete on gravel at the Spanish Rally Championship, and filled the parc fermé at several venues. It became the most widely used car at the event, which gained enormously in popularity thanks to the brand’s promotional activities. A year later, in 1995, SEAT began building on its rallying experience to tackle the World Rally Championship. A segment 2.0 litre Ibiza units competed at several events and produced some very promising results. German driver Erwin Weber took third place in the Portugal Rally, but the first and second place wins by Weber and Toni Rius at the Greek Acropolis Rally were the final push for deciding to compete for the 2.0 litre title in 1996. SEAT developed an Ibiza Kit Car to face this ambitious challenge and showed up in Monte Carlo with a clear objective – to win the world title. With an international line-up of drivers, the Spanish team competed at eight events during the 1996 season. With a win by Jesús Paras in Portugal and several podiums for the Ibiza at different rallies in the season, the team won the title at the closing event, the Rally of Great Britain. It was an unprecedented success in the history of Spanish motorsport, and the first time a Spanish brand was crowned world champion. The success only encouraged SEAT to step up its motorsport involvement and the following year the team revisited the World Championship with the aim of achieving a repeat performance in the 2.0 litre category. The technical department developed the Ibiza Kit Car EVO 2 and dominated the season with eight wins and their second world title in the category. The team performed to such a high level that the decision was made to debut the following season in the highest WRC category, but this time with the SEAT Cordoba, the Ibiza’s big brother. Despite the gruelling challenge of competing against other World Rally cars, the Ibiza Kit Car continued on its winning streak in the 2.0 litre category. SEAT Sport ramped up its efforts and in 1998, while they were developing the highest level rally car, they won their third consecutive title in the 2.0 litre category, a triple success that would have been hard to imagine a few years earlier. The brilliant Bimotor led the way to the top of the world ranking in a wonderful decade. The world championship events did not dismiss the promotional series, which even expanded their activity. The Copa SEAT Ibiza was improved with the 1.8 Turbo 20v model as a basis which, besides competing on gravel at the Spanish Championship, was also implemented for the tarmac events.

Although SEAT’s racing strategy turned towards track events and other models, especially the Leon, with which the Spanish brand achieved a milestone for the first Diesel powered car to win races and world titles in the Touring Car category, a few racing versions of the third and fourth generations of the Ibiza were made. In 2002 an N segment version of the third generation was homologated and sold mainly in the Netherlands, where it competed largely at 24 hour variety track events. 2011 saw the arrival of the Ibiza SC Trophy, which built on the CUPRA version of the fourth generation. It was a track-intended car that harnessed the benefits of the production model and was race ready with minimal adjustments. With a power output of 180 hp, 7-speed DSG gearbox and self-locking differential, the Ibiza SC Trophy stood out at the Spain Endurance Championship and at the Italy Touring Car Endurance Championship. On an engineering level, it only needed modifications to the crankshaft so the car could withstand the lateral stress linked to the use of slicks and self-locking friction discs in the gearbox. Furthermore, the chassis was weight reduced and strengthened by SEAT Sport to improve the car’s performance levels and the interior bars were welded to the chassis to lend greater safety to the vehicle.