Peugeot Sport’s biggest motor sport project is the 2015 Dakar Rally, but maybe only slightly more important and/or elaborate when compared to their rally programme, namely European Rally Championship and further R5 car development, as well as Rallycross projects involving 208 supercar. This weekend Peugeot will once again unleash their power in an attempt to secure another international victory for the 208 T16. Kevin Abbring and Craig Breen will lead the overall attack in the Azores, with Stéphane Lefebvre adding another round to his four-round ERC season in the 208 R2.

Even though Peugeot’s main focus is the European Rally Championship, the 208 T16 will soon debut on the World Rally Championship scene as well. Estonian driver Karl Kruuda and Peugeot 208 T16 R5 will take part in the next WRC round, Rally Italia Sardegna (5-8 June). Of course, Peugeot will not be involved as a manufacturer or otherwise, but regardless it’s a nice little moment. You know, 205 T16 and 208 T16 sharing so much DNA and all that, I’m bad at PR speak, but you’ve heard it all before.

Believe it or not, there are still people out there who believe Peugeot could one day return to the World Rally Championship as a manufacturer and fight for the titles. I know, I don’t understand those people either. Seriously though, chances for Peugeot coming back to WRC while Citroën is still around are exactly 0. But Citroën is not the only issue Peugeot has with WRC, there are other nasty problems forcing Peugeot (and possibly other companies as well) to look beyond WRC according to recent comments by Peugeot Sport boss, Bruno Famin. Since Peugeot are not part of the WRC, they can speak freely about the series’ problems, but I wonder if their mates from Citroën feel the same?

The best/worst part of Peugeot Sport’s boss comments regarding WRC? Well, he painted a pretty bleak image of the current situation: WRC is (too) expensive yet it offers very little in return for the manufacturers. WRC should also look to expand to emerging markets, but that’s a pretty tricky issue I’d say; WRC does require some knowledge of the sport, some tradition… it’s not Race of Champions which you can just plug-in anywhere in the world and it will work. However, the most important thing, according to Mr Bruno Famin, is the lack of proper promotion.

“Above all you would need a real promoter who would put on TV the spectacle that’s there, but unfortunately nobody gets to see.” said Peugeot Sport boss. I like the part where he says “spectacle that’s there”, which to me sounds like “WRC is spectacular enough already”. Oh my, what would our promoter say to that?

This weekend will see the Peugeot Rally Academy tackle what is being described as the toughest round of this year’s European Rally Championship. Craig Breen, who is provisionally second in the championship standings, is targeting more podium success in the Azores, while Kevin Abbring will be hoping to put an end to the spell of bad luck that has been chasing him recently. After sitting out the trip to Northern Ireland, Lefebvre is back in the squad for the Sao Miguel Island-based event in his 208 R2.

The Azores… A challenging but spectacular rally

After the all-asphalt Circuit of Ireland, the itinerary of the Rallye Açores features 216.64km of competitive action divided into 17 gravel stages.

The narrow, sandy and hilly tests leave little room for error, while the Sete Cidades stage – which runs along the perimeter of a volcanic lake to the northwest of the island – will be particularly interesting for the Peugeot Rally Academy’s trio.

Meanwhile, the maritime climate tends to deliver fickle, fast-changing weather that can switch from fog to rain to sunshine in an instant, making the trip to the mid-Atlantic isle one of the season’s most unpredictable, if spectacular shows. 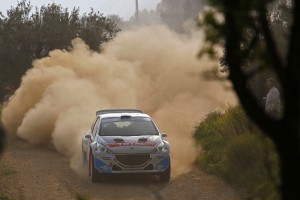 The 208 T16’s first major international outing in Greece saw the Peugeot Rally Academy claim the car’s maiden victory which was followed last weekend by another success on Italy’s Targa Florio. This time it was Paolo Andreucci who showcased the new machine’s winning ability.

Indeed, the 208 T16 is getting better with every event and the teething troubles that hampered its progress in Ireland have been resolved by the French outfit’s technical squad. As a result, the objective of Breen and Abbring on the Rallye Açores is to add another strong performance to the 208T16’s burgeoning record.

Along with his co-driver Scott Martin, Craig Breen is second in provisional Drivers’ standings.

Adapting quickly to the Portuguese stages will be one of the keys to success this weekend and the Irishman will be eager to take advantage of the 208T16’s potential to recover the championship lead.

Kevin Abbring: the speed is there

While gravel is his favourite surface, the talented young Kevin Abbring has shown that he is at home on any type of stage since his European Rally Championship debut. Despite the technical problems that have unfortunately spoiled his runs so far, the Dutchman is fully focused on his objective which is to convert his speed into a top result.

With co-driver Sebastian Marshall sitting alongside him in the 208T16, he is still in a strong position after emerging as a surprise of the early part of the season.

Stéphane Lefebvre: back in the 208 R2

The youngest member of the Peugeot Rally Academy is back for his third outing in the new European Junior Championship. He is a member of this year’s FFSA Equipe de France line-up and, in 2013, won a budget to contest four rounds of the 2014 FIA ERC. After traveling to Latvia, he missed the journey to Ireland but returns to the series particularly fired up ahead of the Rallye Açores which he has already contested once and which he particularly enjoys.

Stéphane is a strong all-rounder with a particularly tidy and efficient driving style. Along with this co-driver Thomas Dubois, he is also a determined hard worker and uses the video films taken in recce to maximum effect in order to play a front-running role.

Also of note is Jan Cerny’s first class start to the year. He is currently on top of the provisional Junior ERC leaderboard and will be challenging for his third win of the season in his 208 R2 in the Azores this weekend.

Craig Breen: “I can’t wait to for the start of the Rallye Açores. I’ve already done it once before and it’s a great event. Sao Miguel is a magnificent island and its sandy stages are an added challenge, not to mention the weather which can really influence the final outcome. Last year, there was a great deal of rain and fog, so we’re hoping for drier conditions this time. The Circuit of Ireland turned out to be a difficult rally for my co-driver and me but we have every confidence in Peugeot Rallye Academy’s ability to bounce back from the problems we encountered at the last round. It will be important to score points in the Azores and we have every intention of hitting the ground running!”

Kevin Abbring: “I’ve never been to the Azores before and I am looking forward very much to competing on what I’ve been told is an extremely beautiful island. The stages are technically challenging and apparently call for a clean, tidy driving style. I have no idea what the grip is like and how it can change but the occasional portions of asphalt will help when it comes to managing our tyres. There are some narrow parts and many places that can catch you out easily, so there is no room for error. I am sure it’s going to be an entertaining rally.”

Stéphane Lefebvre: “The Rallye Açores is a great event which I like very much. In 2013, I was on top in the two-wheel drive class, so I’ve got a fond memory of that. The weather can be a tough parameter so it’s important to be able to adapt and work hard to be at your very best. I can’t wait to get back behind the wheel on the 208 R2 on an FIA ERC event.”

Timetable
Thursday, May 15: shakedown and qualifying stage – Friday, May 16, and Saturday, May 17: event