Every article concerning Rally Argentina must have “tango” in its title, so there. Mud, fog, rain, twisty narrow stages combined with faster and more flowing ones, 50+ kilometer monsters… all this and more made up the 2014 Rally Argentina. Jari-Matti Latvala outfoxed Sebastien Ogier and, according to many, saved the championship from becoming another one man story too soon. Kris Meeke and Robert Kubica made it home in one piece and Mikko Hirvonen showed how to rally2, if given the chance. All in all, it was another epic spectacle in this equally epic sport, but the subject of this “series” are the photographs, captured by the photographers and/or agencies hired by four leading WRC teams.

Oh it’s so easy to consider only the pros and good sides of the photographer’s job and think “I could do that in an instant”. Being payed to snap pictures all around Europe (with couple of long haul events thrown in to justify the “world” bit), to travel and see the world, to be recognized by all the major players – team bosses, drivers, co-drivers, and finally to have your work (sans credits, of course) featured in leading newspaper and online publications. It’s almost as somebody payed you to eat pancakes or devour large quantities of beer. But what if you were also asked to go to a supermarket to fetch the ingredients needed to make pancakes and then make them before you eat them, or if you’re required to work in a brewery in order to be able to enjoy unlimited supply of lager? Contrary to popular smartphone-with-1-billion-megapixels belief, it takes a LOT of work to produce top quality photographic material on WRC events. The most difficult part is actually knowing how to use the equipment, all the details concerning the camera and available lenses, as well as knowing what actually makes a good photograph, from framing to working with the light. Maybe the most important thing, especially in rallies, which are known for changeable weather and mixed conditions, is to know how to creatively use the available circumstances and/or to improvise. But let’s say you’re good at all this – you still have to get to the stage, find a good spot, not just one, but maybe several. You must deploy your equipment, if you’re working with remotely controlled cameras or flash units, maybe even find a spot where you can shoot two pictures of the same car in one pass, one from the front and one showing the rear, sliding into a hairpin. Of course, you will not be able to travel up and down the stage when it’s about to go live, so you must travel to the area before the event and do the photo recce of the place, ideally in the same hours in which the stage will be run during rally; get out of car often, check the scenery, measure the light and check the direction of the moving Sun, keeping in mind that this ideal spot of yours is also safe from oncoming WRC traffic. I will only mention the post processing and the time spent on transferring images, browsing through them, picking the best ones, fixing them if needed, uploading/sending to the clients. Sometimes WRC photographers also eat and sleep, but that was never officially verified.

Yet this is the job many would kill for. It’s passion and it’s easy to work hard if you’re passionate about it, even if, at times, job makes you hate it. There’s no weather like WRC weather, if you’re a working professional in the sport. I’m not, but I think I have a pretty clear picture of what some of the challenges of this profession might be.

You’re right, all this has nothing to do with Rally Argentina. Or it does? It only takes a look at some of the photos snapped there and it becomes obvious that photographers had to work hard to earn some quality material in the foggy, misty, damp conditions, sometimes working with very little light. But you know what? They did not care about any of that, I think. Judging by the images in teams’ archives, photographers actually enjoyed the conditions and the show and the results were just great. Each team had at least five very good photographs competing in WRB’s finals, but I had to make a decision and pick just one from each pack. I honestly believe photographers (secretly) loved the conditions in the mountains, there is no other way of explaining the flood of great photographs. Hyundai traditionally provided fantastic plays of motion, shapes and colours; M-Sport brought power and action in their shots; Citroën had some very intensive close-ups and Volkswagen looked for new angles and feel. It really was difficult to pick the best photo of the lot, but I think the one featuring Elfyn Evans and Daniel Barritt stands out.

The winner
This is another example of why rally photographs work great with people – it’s not always easy to include them, and sometimes few people can ruin the shot which would otherwise be great for its solitude, but this is not one of those photos. If anyone needs a visual evidence of dedication, passion and love people feel towards WRC, this is your photo. Personally, I am insulted each time someone suggests WRC is boring or not popular enough, especially if such words come from people who are in charge of the WRC’s future. People around the globe worship the WRC and its heroes for decades and their love for the sport did not vanish when WRC stumbled in recent years. These are not five-minute fans our promoters are looking to find in powerstage shootout audience. McKlein Photography image (as well as the remaining three, made by Austral, McKlein and Krailig) reveals the true dedication and endurance of WRC fans – they can, in many cases, be compared to WRC cars; energetic, passionate, stubborn and focused on the job – cars on driving and spectators on having fun. These photographs tell a story many choose to ignore or forget. For this event I was going to pick four winners, but let’s say this photograph made it to the top just because it presented the story of rally and its fans in the most obvious and telling way. The three remaining photographs are equally fantastic in their own right. Just like WRC scored a victory when Jari-Matti Latvala grabbed that 1st place trophy, all photographers and agencies scored another victory by providing a top quality material, documenting yet another story in this epic world class championship. All four images celebrate connection between the sport and its fans, just in case anyone needs a proof! 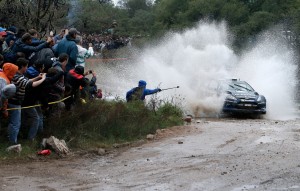