World Rallycross Championship presents itself to Belgium… with WRC stars

World Rally Blog’s reader, friend and contributor Dré Galiart took part in World Rallycross Championship press presentation in Belgium, and what he saw and heard there clearly blew his mind. Or was it the ride in one of the supercars that did it? Read on and find out. Thanks for telling us all about your educational and entertaining day at the World RX presentation Dré!

Mettet (B) – Reading the three characters… W R X. Ah, so Subaru brought up their new model tuned by Prodrive? From 2014 WRX has got itself a new meaning. World RX represents the new World Rallycross Championship. Mindblowing 600 bhp cars that look like World Rally Cars. World Rally Blog’s Dré Galiart was invited to the press presentation in Belgium’s Mettet.

Managing cost and increasing media
Which motorsport gets 80 races in one weekend, action every couple of minutes and epic finals? World RX seems to get all the things right. The spectacular recognizable road cars from the WRC, the non-traveling from stage to stage pocket circuit format and easy understanding of limited categories. “It’s all about managing costs and increasing media” says managing director Martin Anayi during his press conference interview with AUTOnews journalist Hugo van Opstal. World RX seems to reveal the best kept secret in motor sports.

Newly drawn circuit
Mettet is a new track to the landscape of rallycross venues. Situated near Belgian Charleroi, it’s the first purpose build track. They involved Belgian Rallycross-regular Koen Pauwels in the design of the track to reach the best result. On first impression, the drivers call it ‘very technical’. With two jumps (one downhill) it brings the spectacle and excitement that World RX already got its popularity from. With both jumps landing on gravel and one gravel patch ending in a hairpin things already look interesting. Possible downside? Overtaking will not be easy, but then again.. in World RX always something happens!

WRC stars present
Of course, we already knew Petter Solberg for his entering the World RX. This year he even already made it to his first victory (Portugal). However when analyzing the finals of the first two rounds, it must be said that the championship is highly competitive, but of course luck is also a part in the sport. This year we will see at least one more former WRC star active in WRX. It’s Belgium’s François Duval. The winner of one WRC rally (Australia, 2005). Over the last years Duval already did some European rounds of Rallycross, but this year it seems more serious than ever. He’s teaming up with Anton Marklund’s VW team for Mettet. However he might not be the only WRC star entering as a group of people is working on getting Thierry Neuville to the start line with a Hyundai Supercar. Fingers crossed as the chances seem 75% at this point, that he will indeed make it.

Who better to turn to then Martin Anayi, when we want to have our questions about World RX answered. The former lawyer is topping the World RX organisation on behalf of IMG. Being involved in all kinds of motor sport reaching from the Chinese Touringcar championship to NASCAR, IMG is the company that is proving to have the knowledge to promote a motor sport championship in the right way. World RX is their fastest growing new adventure. We try to draw a parallel between WRC and WRX. What is the difference? Do they bite each other? 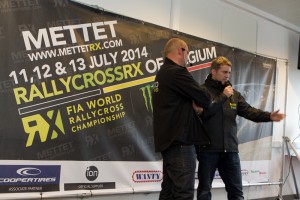 Hopefully helping each other. We are both FIA World Championships. The big difference is that they got 40-50 years of World championship status and we’ve got one year, not even yet. The cars look similar, but the difference is under the bonnet. It’s a two liter turbo, our technical regulations also allow a 1.6 and a 1.4 with a different weight category. It’s give or take 600 bhp compared to a WRC car which is probably 320. Our regulations are less about technology and more about production, less about driver aids and more driver handling and feeling, but yeah.. They look the same.

WRC is currently struggling with TV coverage. World RX does that in a different way. Is World RX already ahead of WRC on that point?

I don’t know, is the honest answer. I haven’t seen their statistics. I know from our perspective it was a lot easier to have a conversation about Rallycross, as we explained it was short races. Five races in one hour. I think it’s always better to watch cars racing against each other on a track, rather than watching a time trail.

Is this the power of the sport?

Yes, we have done very little to the sport. The technical regulations we’ve done nothing, the cars are exactly the same. We are tightening up the rules, to allow for the future. Because we know that manufacturers are coming into the sport now and that can be some good things and negative things. They want to put money and that’s good, but not too much. You know, as a balance to be had. So that needs to be looked at. I think the challenge for WRC is that it’s a much longer distance. To look at a stage rally and say “Can we cover that with 10 camera’s? “. We can do that with one of our events, so immediately I think we’re on an advantage. I think it translates better, seeing more cars race against each other.

Last weekend we saw a BTCC Champion in World RX, we already have the WRC drivers. Are there any other motor sports you are looking into to get them into World RX? For instance we saw former Dakar Truck winner Gerard de Rooy already on a European Rallycross round in the past.

Sure yeah, the nice thing about Rallycross is that it is a melting pot for different disciplines. We’ve got a former WRC champion, former F1 champion in Jacques Villeneuve, we’ve got a DTM two times champion in Matthias Ekstrom, a BTCC Champion in Andrew Jordan and Formula Drift Champion in Tanner Foust. I like that, getting different drivers with different styles, shows that you don’t have to have same style in Rallycross to be equal quick, which I think is really exiting. For me that is one of the most exciting things about the sport, because you don’t have to drive the circuit the same way to be equally fast. It is unusual, I don’t know anywhere else where you can do that. You can have Petter Solberg and Tanner Foust flinging it around the corner and you can have Timmy Hansen and Andreas Bakkerud being nice and neat and tidy. The end result is within seconds. To answer your question, yes I think the more different disciplines we can get to compete, the better! 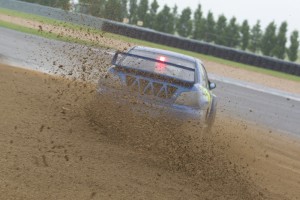 With World RX growing faster than expected, we wondered if we will see new tracks next year in a European setup.

Topping off the day with a co-drive in the Subaru Impreza Supercar of Belgian ace Patrick van Mechelen, World Rally Blog is blown away quite literally by the speed of World RX. It feels as exciting in a car as it looks on the outside. Massive slides, big smooth jumps and the power to punish any opponents little mistake. No wonder this sport is already reaching 180 countries with their streaming broadcast! The Belgian round of WRX goes live on 12 and 13 July. The season ends in the end of November in Argentina. Check www.rallycrossrx.com for latest news and updates.