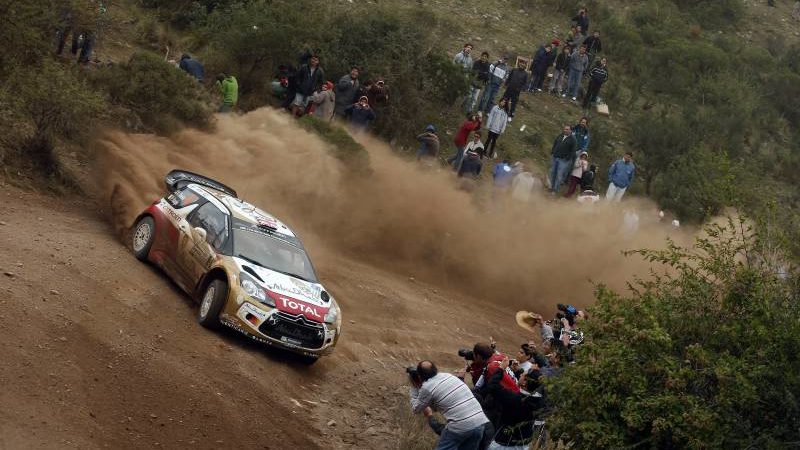 It’s previews time and first up, Citroën Racing. I was going to cut this article in pieces and serve it as such, you know, pull out drivers’ comments and present them like an exclusive Q&A, but nope, I think previews make more sense when left untouched. They provide all the info you need about your favourite team and drivers and they also, quite often, feature interesting bits of information about the event, its history and team’s successes in the past. So, no tiny slices of info here, only the whole meal.

Personal point of interest: Kris Meeke and his new found confidence. When he gets his act together, Kris is mighty fast. Argentina proved it, now it’s up to him to keep the momentum going.

CITROËN AND RALLY ITALIA: WINS IN SANREMO AND SARDINIA

Held on roads around Sanremo from 1970 and then in Sardinia from 2004 onwards, Rally Italia has seen a Citroën winner on six different occasions.

The French car maker’s first win on Italian tarmac was claimed by Sébastien Loeb and Daniel Elena on their way to securing Citroën its first WRC Manufacturers’ title in 2003.

With two new crews competing on its behalf in the 2014 World Championship, the Citroën Total Abu Dhabi World Rally Team had been prepared to experience a period of adaptation in the early part of the season.Having secured four podium-finishes in five rallies, the team has maintained a high level of performance and currently holds second place in the Manufacturers’ standings, whilst Mads Østberg lies third in the Drivers’ championship.

“We are looking to harness the full potential of the car and the drivers,” recalled Marek Nawarecki, Deputy Team Principal.“Our objective is the same in Sardinia.The work done on developing the Citroën DS3 WRC enables us to meet the expectations of our drivers.Mads has a lot of experience in Sardinia, whereas Kris is more familiar with this rally than the ones earlier in the season.These are strengths of which we must take advantage.”

On roads around the new base of Alghero, the crews will be faced with some new challenges.“It’s a tough event, but that is true of every World Rally Championship round.To prepare as effectively as possible, we ran a test session on the island on roads that were very similar to those we’ll face in the rally itself,” continued Marek Nawarecki.“By combining our experience and the feelings of Mads and Kris, we were able to improve the set-up of the Citroën DS3 WRC.Both our drivers seem very happy with the handling and balance of their car.That’s our aim: give them the opportunity to express themselves on the stages.”

Third in the WRC, Mads Østberg has considerable experience of Sardinia.The Norwegian has competed here every time the event has featured on the World Championship calendar since 2007.

“I have done pretty well at this event, over the years,” emphasized Mads.“I have some good memories of racing here.The route is very technical and the grip level varies on the different runs.It is particularly important to take good pace notes here.You have to be able to adapt your pace when conditions on the stages change.”

During the recent tests in Sardinia, the Norwegian was able to work on the set-up of his Citroën DS3 WRC:“We found solutions that should enable us to be even more competitive on this kind of surface.I think we can be fast in Sardinia and I have quite a lot of experience at the event.So I’m going to push a bit harder from the start to try to get among the frontrunners.The target, as always, is to finish on the podium but I’m hoping to mix it with the leaders.”

After a series of three rallies which were totally new to him, Kris Meeke showed that the slightest bit of experience could be a major advantage.A few years after his one and only previous appearance at Rally Argentina, he finished third in his Citroën DS3 WRC in Carlos Paz.In Sardinia, the Briton will be to call upon the experience he acquired during four starts between 2004 and 2011.

In the Junior WRC – where he grabbed a podium finish in the category in a Citroën C2 Super 1600 – the IRC and the WRC, Kris has tasted the lot on the Italian island:“It’s a typically Mediterranean round.The roads are narrow, fast, slippery and littered with big rocks!We’ll also have to see what the new sections have in store for us.In many ways, it’ll be a new rally for us and we’ll be starting from scratch in recce.”

“We were very much on the pace during day one in Argentina,” added the British driver.I hope we’ll have the same speed in Sardinia.I have to keep this positive momentum going into Rally Poland so that I can head into the second half of the season, where I know the events better, full of confidence!”

A TEST OF ENDURANCE FOR KHALID AL QASSIMI

Currently lying second in the Middle East Rally Championship, Khalid Al Qassimi will be taking part in the third of the four WRC rounds included in his programme this season.Having made it to the finish in Sweden and Portugal, the Abu Dhabi driver is expecting another tough challenge in Sardinia.

“I haven‘t always made it to the end of this rally,” recalled Sheikh Khalid.“You have to find the right balance between pushing and staying on the road.The roads on the stages are fast and narrow.There is no room for error whatsoever, because there are rocks and trees just off the racing line.”

The biggest challenge will be the stage that is almost sixty kilometres long on day two.That will be a real test of endurance.We are going to take part in some testing this week with Citroën DS3 WRC to find the right set-up.I can’t wait to start!”

FROM CAGLIARI TO ALGHERO

In 2004, the Italians left Sanremo and Liguria behind, taking the World Rally Championship to Sardinia.Having initially set up base in Olbia, facing the Tyrrhenian Sea, the rally has this year moved to Alghero on the west coast of the island.

Recce will get underway on Tuesday, 3 June from 8am.Two days later, the shakedown will be held on a 3.38 kilometre-long stage (Putifigari) located around fifteen kilometres from the service park.

The rally will get underway two hundred kilometres further south in Cagliari, with the opening stage held along the port and broadcast live on television.

Saturday’s schedule features only four stages, but the distance covered is more or less the same as the day before.After warming up on Monte Olia (19.27km, 9.18am and 4.54pm), the drivers will take on the long Monte Lerno test (59.13km, 10.23am and 5.59pm).This lengthy stage, just shy of sixty kilometres, features a spectacular jump which invariably provides some great images for the end-of-season highlights.