Once again it was a battle till the very end and I’m not talking about the actual event and the actual crews. Instead, I’m talking about photographs featuring the 2014 Rally d’Italia Sardegna, supplied be each of the four “manufacturer” WRC teams in their press archives. Perhaps Volkswagen Motorsport is once again superior to other teams in terms of results and sheer pace, but in the photo world fights are much closer and it’s impossible to tell in advance which team will take the win when all memory cards are emptied and images are transported to web servers. Of course, talking about “photo fights” between teams is a bit of a joke and a silly thing, but at the same time it’s nice to see distinctively different styles in each team’s archive, even if same photo supplier… supplies images for two different teams. These days we’re often told how everything is more or less the same and there can only be this many variations to a job or a performance, but this, of course, is utter bollocks. Maybe one of the future WRC fans, the one waiting to be enchanted by the revolutionary 2015 shootout stage, may think there is a finite number of ways to drive a WRC car, but we know very well it’s total nonsense. Same can be said about photographs – there are some classic angles, safe bets and bulletproof concepts, but you don’t stop on such images, you don’t even see them, in fact. Your brain instinctively tells you they’re boring and urge you to move on to more interesting, creative and captivating stuff.

Oh how I hope for WRC fights to be as close as photo fights, especially between teams. Sounds good, but there is a problem and it’s a rum ‘un – no matter how creative or skilled a driver is, sometimes car just falls apart, catches fire or starts shedding its parts. It takes much more than just creativity and skill for a driver to be competitive and consistent, which is a shame, but again, rally is a team sport, unlike photography (to an extent). Speaking of photo comparisons between teams, the closest fight of this round was fought not between two teams, but between two photographs (both featuring Andreas Mikkelsen) from the same team. In the end I went with the image featured here, the other one being the stage finish scene, showing nothing more than a car, a Michelin banner and a stage finish board set against the clear blue sky.

Gravel events usually provide a huge amount of dust or mud or dirt and in Sardinia dust prevailed. Rally photographs featuring dust are always exciting because they provide a direct information about the speed and energy and momentum of these cars. There were also jumps, of course, because Sardinia. High jumps, long jumps, clumsy jumps and by-gaw jumps… but jump is a jump, even though there were some excellent photos and creative angles breaking the usual rules of jump photography. I did not pick jumps in the end, I wanted a bit more and I got intrigued by the dust, its texture and very specific colour. What follows is the dusty rhapsody, a symphony for soil, turbochargers and Michelins. Selecting a winner was tough and cough and I based my choice not on the amount of dust in the air but on the emotions stirred by each photo. The Volkswagen Motorsport one won ahead of M-Sport image (a fantastic catch of the stream of dust forming a perfect arch along the side of the car, almost following the livery lines, amazing!) by 1 tenth of a second because it simply did a stunning job of dividing everything in the frame in thirds, but then again, third placed Hyundai Motorsport had superb colour play once again and shared its place with a very powerful Citroën Racing image, in which you could almost feel the horse powers being pushed down into the ground by the spinning wheels. I suck at picking winners, they’re all great.

As I said in previous paragraph, this image, featuring Andreas Mikkelsen and Ola Floene (copyright: Daniel Röseler – Bildagentur Kräling), simply spoke to me. Great use of light, muted palette and absolutely fantastic spread of focus. There were other rule-of-thirds examples in other archives as well and it’s great to see it being used in high action motor sport photography, but this image simply did a best job at it, for me at least. This photo works great in all sizes, which is an added bonus and it’s got speed and power and the sense of movement. It’s also dramatic without being forced to wear too much makeup – just a raw, rugged, dusty rally masterpiece. I love it. 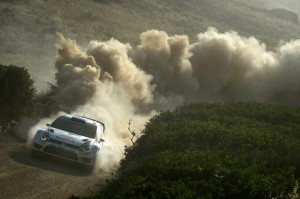