It’s light, agile, has huge wheels, longer suspension travel and can climb vertical things because Peugeot officials said it can. Despite the fact that everyone and their pet snake thinks 4×4 is the way to go in offroad and desert conditions, the fact is 2WD cars are proven desert warriors. There are not your ordinary tarmac offroaders (also known as SUVs), instead cars like Peugeot 2008 DKR are fine tuned and built with just one purpose, to endure the harsh terrain and deliver enough speed and torque to beat the opposition (and the conditions). As the text below will reveal, opting for two wheel drive system brings additional benefits, so the car can be lighter and more agile compared to 4×4 rivals.

We all thought that Peugeot cannot build a car that will look more menacing and monstrous than the Pikes Peak winner, 208 T16 Pikes Peak? Ha, well we ought to think again because this baby here looks meean, especially if they really do stick to the black-ish body paint. Of course they’ll say this car is feeding on diesel but we all know that’s a lie – it eats little kittens and small children, when nobody’s watching.

Have some photos and then the official PR thing below.

After grabbing public attention with the stunning new 2008 DKR, Team Peugeot-Total has finally lifted the lid on the inner workings of this muscular beast, which will take on the 4×4 brigade on the 2015 Dakar with just two driven wheels.

Dunes, mountains, dry river beds, canyons, furnace-like temperatures, salt deserts, rough terrain, fesh-fesh sand… These are just some of the joys that await the 2008 DKR on the next Dakar Rally. To tackle this tremendous challenge, Team Peugeot-Total has followed a very daring technical path: “Much like we did at the Le Mans 24 Hours by electing to run a closed-cockpit car, we decided to adopt an innovative concept, ” reveals Peugeot Sport Director Bruno Famin. “When it comes to cross-country rallying, the biggest question is whether to run with four-wheel-drive or just two. After a detailed study of the question, we decided to go for two-wheel drive transmission which presents a number of interesting benefits.” This bold decision will enable the team to try to become the first to win the Dakar with two-wheel drive & diesel engine.

In order to balance out the chances of the different solutions, the rules in effect compensate the inherent advantage of 4×4 vehicles by allowing two-wheel-drive machinery to benefit from certain advantages. Technical project manager Jean-Christophe Pallier summarises them: “In motorsport, weight is counter to performance. However, in the case of cross-country rallying, two-wheel drive cars are allowed to be significantly lighter than 4x4s. They are also entitled to use bigger wheels which provide them with a certain advantage when it comes to coping with the many pitfalls associated with this type of terrain. On top of that, they allow us to minimise the front overhang. The 2008 DKR can practically climb vertical walls! And that’s not all! Longer suspension travel – 460mm instead of 250mm – enhances its ability over dunes and when soaking up uneven ground. That’s a key asset on an event like the Dakar!” Another advantage of the larger wheel size is a system that enables the tyre pressures to be adjusted remotely from inside the cockpit upon entering a zone of dunes – a tactic that could yield a gain of precious minutes!

In order to exploit these benefits fully, Peugeot Sport’s engineers put their creativity to the test to come up with an extremely compact car. With its 340bhp, V6 twin-turbo diesel mid-rear engine, the 2008 DKR resembles a muscular feline ready to pounce and soak up obstacles. “Fitting all of the vital assemblies into such a small space gave us quite a headache!” admits Pallier. “Small cars tend to perform more comfortably over twisty WRC-type stages, so this arrangement increases the potential of two-wheel drive cars in situations where the 4x4s tend to have the edge.”

Beyond the conviction – expressed by Red Bull for the last two years – that two-wheel-drive vehicles possess attractive qualities that shine through even across the most inhospitable of terrains, this technical approach also makes sense for the French manufacturer, as Bruno Famin explains: “Given that the production 2008 is a two-wheel-drive crossover equipped with Grip Control technology – which enables it to go just about anywhere – it is only right that the 2008 DKR derivative should similarly take on the challenges of the Dakar with just two-wheel-drive.” So all that now remains is to let it off the leash! 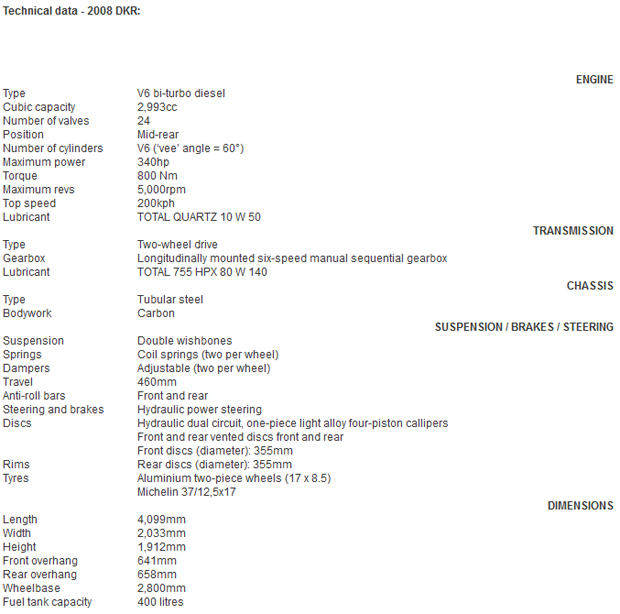