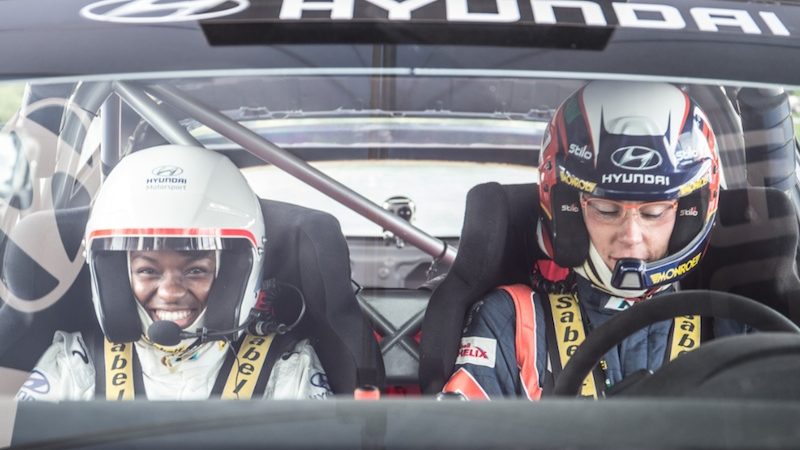 Olympic Gold Medalist boxer Nicola Adams is no strange to extremes, obviously, and that always helps if you’re about to do something as radical as sit beside a top World Rally Championship driver for a flat-out rally stage ride. Being used to always expect the unexpected is a great virtue, especially in a rally car. Why? Because you can relax and forget about the “why isn’t he breaking already!!??” panic and instead enjoy and have fun.

The car used is this year’s fan favourite Hyundai i20 WRC, but I sincerely hope you knew that already. As the official press release reveals, Nicola is passionate about fast cars, so I do suppose that also helped her feel at ease and fully immersed in Thierry’s skillful drive. And it was some drive because Nicola obviously became a huge fan of the sport after experiencing its fast paced nature first hand.

Nicola Adams commented: “I was so excited to be offered this opportunity and I wasn’t disappointed.  It was just so cool. Everything happens so fast and you’ve got to be really skillful to drive one of these cars. Absolutely awesome – this has to be my new sport!

She continued: “I think Thierry tried to scare me a little but I got my own back when I invited him into the ring after!

Thierry Neuville commented:  “It was a great honour for me to meet Nicola.  We both share the same strong determination to win and she really is at the top of her game.  I wish her the best of luck in the forthcoming Commonwealth Games”.

Nicola Adams will be going for Gold again in the Commonwealth Games that start on July 23 in Glasgow. Thierry Neuville recently celebrated his second podium in this year’s World Rally Championship by finishing Rally Poland in third place. He is currently preparing for Rally Finland which will begin on July 31.