Hyundai looks back on 2014, the comeback year

For me, Hyundai’s World Rally Championship team is The team of the year in 2014. They have what it takes to become regular winners and title challengers, there is no doubt. The learning year is over, though, but what a year it has been. It is all going to get a further two notches more serious in 2015 and I am positive Michel Nandan and his team know this very well. We still haven’t heard all about their plans for 2015, but until we do, there’s a whole year of fantastic WRC comeback to look back at and review. That’s exactly what Hyundai did. Their 2014 report follows below, and do read it all, there’s a metric ton of interesting facts and bits of information. Well done on your WRC return, Hyundai, bloody well done. 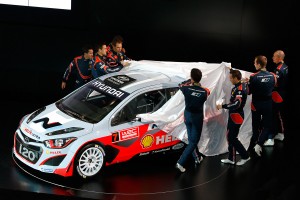 November 20, 2014 – For the Hyundai Shell World Rally Team, the 2014 FIA World Rally Championship has been full of highlights, memories and firsts. The team has made a positive impact in its maiden season, bravely carrying out a comprehensive year of development with the Hyundai i20 WRC in the very public and extremely competitive WRC environment.

It was an ambitious target for the new team to make the start of Rallye Monte Carlo but this initial objective was achieved comfortably. The subsequent rallies would deliver above and beyond the team’s modest targets: a maiden podium in Mexico (Round 3) was followed in Portugal by the team’s first ever stage wins. Later in the season, at the team’s home rally in Germany (Round 10), it secured Hyundai’s first ever WRC victory, a 1-2 result and its first ever Power Stage points.

The WRC community has welcomed Hyundai Motorsport with open arms, which has helped the team to settle into its new surroundings quickly. The primary objective has remained unchanged: to finish each rally with all cars. However, as the numbers show, 2014 has been a season to remember for the team for so many more reasons.

Team Principal Michel Nandan commented: “We have been very pleased with the outcome of our debut season in the extremely competitive World Rally Championship. We were under no illusions how tough this season would be but we have learned a lot from this testing year – and accumulated some very good results along the way. From a blank sheet of paper, we have built a team of 120 dedicated professionals, developed a competitive Hyundai i20 WRC car and achieved a number of important milestones. We have taken our first stage wins, our maiden podium and a memorable 1-2 in Germany – a day I am sure none of us in the team will ever forget. To all of our supporters, partners and fans, thank you for joining us on this fantastic ride. I’d also like to thank each and every one of our team for their individual contributions to this season. The statistics and numbers tell a fantastic story, but it is the tireless work behind the scenes at Hyundai Motorsport which has made it all possible.” 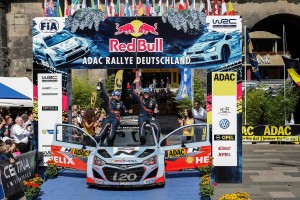 On-Stage Success
Belgian Power
Swede Dreams
All Around the World
Growing Fanbase
Home away from home with Hyundai
Multinational Alzenau Base
And finally, who could forget…