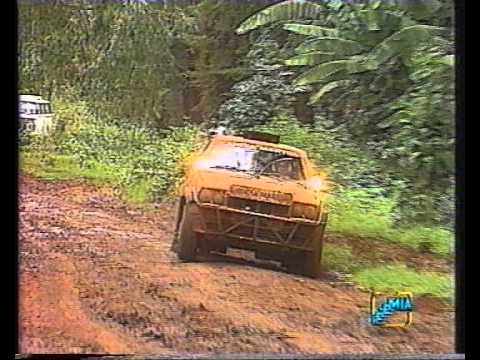 This is one slow and lazy Sunday, or at least it would be, with all the rain and wind outside, but you can easily overcome boredom, all it takes is a bit of browsing and searching. I was not able to travel to Croatia to see the 5th Rally Show Santa Domenica, but that doesn’t mean I will let this weekend slip by without any mud, even if virtual, thrown in my general direction. Sometimes you need to look for things on Google or Youtube, but sometimes things just find you. This particular video was suggested to me by whatever sorcery that powers Youtube algorithms. I saw a tiny thumbnail image of a very dirty and very adventurous looking Lancia Delta and I decided to bite in. Of course, any self respecting rally fan will know that cars with massive protection cages, raised intakes and huge lightpods mean only one thing – Safari Rally in Kenya.

After watching this (and several other videos) I cannot help but wonder what happened to Jean Todt’s (who is the president of the FIA) noble and very welcoming idea of bringing adventure and endurance back into the WRC. You can almost feel the efforts needed to survive the elements (and roads) in Kenya. Very long stages, grueling terrain and extreme climate, it’s all there – adventure and endurance. Plus, World Rally Championship becomes a bit more World-y, as opposed to its current European-ish format.

Do we really need two events to be so close, as is the case with French and German rounds of the series today? Rally of France had huge amount of character during its Tour de Corse years, but then it just ended up in Sebastien Loeb’s backyard and is now, more or less, Just Another Tarmac Event. At least Germany has its vineyards and those something-steins on supernarrow roads, but what is so special about current round of Rallye de France? I am not opposing the idea of WRC round in France, not at all – that country should be part of the Championship by all means, but maybe add some character to the event which represents the country with such huge tradition in rallying? That would help distinguish between the German and French rounds. In my opinion, WRC is about diversity and character, and then you add Todt’s endurance and adventure and you have a perfect mix. I mean, just look at the “Challenges” listed below (copy-paste from WRC.com description of Rallye de France):

Not much of a list, is it? 200 kph, really? Roads traverse both narrow and fast sections, you don’t say! Vineyard stages are wider than those used in Germany, ah so that’s the main difference between those two!

For adventure and/or endurance, there is no better way than adding a Safari-type of event into WRC calendar. It does not need to be Kenya but it most definitely can be Africa. Long stages, extreme terrain and climate. They’ll spell “endurance” much more effectively than 5 day Monte Carlo itinerary ever could. But why should WRC go to such places? Because people live in such places too – suffering same climate, terrain and harsh environment. If WRC is about adventure, about broadening of horizons and bringing people together through sportsmanship (while also using the same time for some skillful product placement), then it should visit places which are not just new to calender, as if that’s the only important thing, but which can also put new kind of challenges before teams, crews and sport itself.

Maybe soon it will be time for WRC to leave its little comfort zone and start exploring the world once again. Bringing awe and inspiration into little boys and girls eyes and minds… like in one of the videos below, featuring young boys and very, very angry Toyota Celica.