Eleven crews, seven rounds and a new car, this is what 2015 Junior World Rally Championship is in a nutshell. Citroën and FIA are heading into season two of their joint project, aimed at providing a platform for young drivers and co-drivers to enter the WRC scene and gather experience competing in the events that make up a WRC calendar. Citroën published a very detailed presentation (below), providing all the necessary info on the championship, its crews, cars and rounds. Read up and get familiar with this year’s youngsters because their season begins in Monte Carlo too.

HOST OF JUNIORS LINE UP AT MONTE-CARLO

Inaugurated last year, the partnership forged between Citroën Racing and the FIA to support the champions of the future enters into its second season. Over the last fifteen years, Citroën Racing has enabled several drivers to cut their teeth on the WRC stages. Sébastien Loeb (2001), Dani Solà (2002), Dani Sordo (2005), Sébastien Ogier (2008), Martin Prokop (2009) and Stéphane Lefebvre (2014) have all won titles in the category dedicated to young rally drivers in a Citroën.

Several new features have been introduced for the 2015 season. The calendar now features seven rounds, from which each driver must choose the six rallies at which he – or she – would like to score points. Rallye Monte-Carlo returns to this year’s programme, offering competitors the chance to test themselves on one of rally’s legendary events.

The car has also changed. Launched at last year’s Rallye Monte-Carlo, the DS 3 R3-MAX is now the official car of the FIA Junior WRC. It sets the benchmark in terms of performances in the two-wheel drive category.

Eleven crews feature in the line-up for this opening round, and others are expected to join the championship later, starting at Rally de Portugal in May. Among the initial list of entrants, three drivers will be able to call upon the experience acquired in 2014.

Among the newcomers, many have moved up the pyramid structure put in place by Citroën Racing to help drivers reach the upper echelons of the sport. Yohan Rossel is already seen as one of the rising stars of this programme. Winner of the FFSA’s “Rallye Jeunes” (Young Rally Drivers) initiative with Citroën Racing, he won the French Junior Championship and the Junior Citroën Racing Trophy in a DS 3 R1 before moving up to international level this year. Like Yohan, Daniel McKenna has also benefitted from being part of Citroën Racing’s driver development programme. British rally champion in DS 3 R3, he is also taking his first shot in the world championship.

Quentin Gilbert and Alessandro Re, former winners of the Citroën Racing Trophy, are following the same path. Terry Folb, Yohan Rossel’s rival in 2014, also continues his rise through the ranks, moving up from the DS 3 R1 to the DS 3 R3-MAX.

Like last year, a woman will also be venturing into the international arena for the first time. After spending several years competing in the French Championship, Charlotte Dalmasso will also be making her debut at world level in a Citroën DS3 R3-MAX.

The Norwegian Ole Christian Veiby, one of the leading drivers in the Swedish Rallycross Championship and in his national championship, could be another star attraction in the 2015 line-up.

In addition to the Drivers’ and Co-drivers’ titles and the Nations Trophy awarded after Wales Rally GB, the winner of the FIA Junior WRC will earn the chance to compete in six rounds of the 2016 WRC2 in a DS 3 R5. Last season’s winner, Stéphane Lefebvre will be competing at Monte-Carlo in a DS 3 R5! 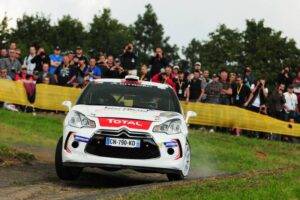 Yves Matton (Citroën Racing Team Principal): “We have made some minor changes to the regulations to attract even more young drivers. These new points mean that we already have a record number of entrants. At Monte-Carlo, eleven DS 3 R3-MAXs will be taking part. Many others will be added to this total at Rally de Portugal. The field is made up of a mix of loyal participants in our promotional formulas and some newcomers. The pyramid that was put in place by Citroën Racing many years ago is now regarded as a benchmark. The systems aimed at identifying talented young drivers and the programme introduced with the national Citroën Racing Trophy further emphasize the commitment of our team. We’re preparing for the future and the talented drivers of tomorrow are putting their faith in us!”

Quentin Gilbert: “The FIA Junior WRC lets us continue to compete in the World Championship in ideal conditions, with a fantastic car! It’s a very interesting category with an FIA title and a WRC2 drive for the winner. I think we have a chance of winning this year. We are starting to rack up quite a bit of experience. Beginning the season at Monte-Carlo is exciting. It’s the most iconic rally and one of the trickiest. The conditions change all the time. You have to improvise quite a lot. The aim is to win the category, but above all I want to be well placed in terms of the championship. Big points will be required in order to be relaxed going into the upcoming rounds.”

Charlotte Dalmasso: “I’m very aware of what an opportunity this is for me! The World Championship is a new adventure for me. I’ll be experiencing everything for the first time at Monte-Carlo: the roads, the conditions and the DS 3 R3-MAX. I’ve never driven competitively on snow before. I’ll adopt a cautious approach to try and make it to the end. But if I get the chance to produce a good performance, then I’ll grab it!”

Runner-up in the Women’s French Rally Championship in 2014, Charlotte Dalmasso made her debut in the category in 2011. She is competing in her first international programme this year.

Eighth in the FIA Junior WRC last season, finishing fifth in Finland and Germany, Simone will be able to call on his experience to target better results in 2015.

After two seasons in the Norwegian Championship and a fifth place finish in the Swedish Rallycross Championship, Ole Christian made his competitive debut in the WRC last year in Spain and Wales in a DS 3 R3. At just 18 years old, he is the youngest driver in the field at the opening round.

British Rally Champion last season in a DS 3 R3, Daniel McKenna has moved up a level for 2015. After two appearances at Wales Rally GB, this is his first campaign at world level.

A regular on the roads of Italy, he finished third in the IRC in 2014 in a DS 3 RRC after winning the Citroën Racing Trophy in 2013. Alessandro Re has only taken part in one previous WRC event: that was at the 2013 Rally Sweden, in a DS 3 R3.

Third in last year’s French Junior Championship and third in the Junior Citroën Racing Trophy in a DS 3 R1, Terry Folb is now taking on a new challenge in the WRC, after spending two seasons competing in France.

Kornel took part in his first season at World level in 2014, competing in the FIA Junior WRC and scoring points in Poland and Germany. He is one of three ‘old hands’ from last year.

Former winner of the Citroën Racing Trophy in France, Quentin took part in the FIA WRC2 Championship in 2014. With his experience, he is one of the favourites this season.

Fourth in the WRC3 and the Citroën Top Driver in 2013, fifth in last year’s FIA Junior WRC, Christian is very experienced at World level in the DS 3 R3. In contention for long periods to win the title last year, he’ll be one to watch in 2015!

Originally a circuit racing driver, first of all in saloon cars and then in single-seaters in the GP3 Series, John has decided to take his career in a different direction. Close to the family of Bruno Thiry, he has only taken part in a handful of rallies to date.