Jari-Matti Latvala did not give up, don’t listen to him

Calling anything certain or safe in relation to Rallye Monte Carlo is just silly, at best. Because this particular rally will just take your safe prediction and certain conclusion and turn it upside down, inside out and then chop off its head. Remember those cries of joy after Sebastien Loeb’s SS 1 stunner, the king is back, he will win it by a margin as huge as his carisma, nobody can touch him. Well, that did not turn out exactly as planned, did it. Then it was Sebastien Ogier’s turn. He had such a huge lead, he will win it, nobody can touch him, it’s all over, we better jump off a cliff because season is lost. Then few stages happened, conservative driving here, not so optimal tyre choice there and all of a sudden Ogier’s superhuge advantage got cut in half. In all honesty, I still think 42 seconds is huge, but am I going to be silly enough to call it big enough, having in mind we’re still looking at three stages tomorrow. No, of course I am not. We all know how little it takes.

Why would anyone declare this season done and dusted, boring in advance and utterly predictable? And all that before the finish of the first event of the year. Did people really expect Ogier would to somehow lose his skill, style and determination during a short break between two seasons? I don’t think we should count on that, no. We should instead count on other drivers to close the gap to Ogier, who will remain this fast or even faster for years to come.

I sort-of bashed Jari-Matti Latvala in some of my tweets today, but not because he decided to play it safe in Monte Carlo and set his targets very low at 4th overall. For a title contender that’s low, but it’s also a sign of being a title contender. It means you’re using your head (or your mental trainer’s head, evil and malicious individuals would add) to come up with realistic targets and optimal approach to each particular event. This Latvala is much more dangerous than 2014 or 2013 Latvala, because finally you can hear and sense the control behind the speed. Titles are usually given to guys with most points on their tally, so Latvala decided to get some of those in Monte vs. risking losing it all for just a few points more. The latter would require significant departure from the comfort zone Jari-Matti built around himself this year and he has every right to dismiss chasing the elusive victory if it means he could start the year on the back foot. 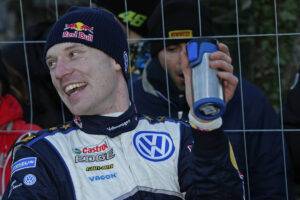 Alright, so why did I complain? Simply, I did not like hearing him throwing in the towel in live interviews. He almost went as far as saying he was happy not chasing the victory, which is a bit of a clumsy statement and should not be part of what a major motor sport star and a driver aiming for highest results will say to general public. If you have a strategy, then try to elaborate it further, but don’t say you’re happy with fourth, because that just sounds you’re not trying. And even if results speak a different story, there’s always that thought of “why isn’t he trying”. We like to think they’re pushing all the time, always trying to shave a fraction of a second or taking a few extra risks, even if we very well know they’re not. But you just can’t go to TV and say “ah, I’m happy with fourth”. No, you’re not, not to public and press you’re not! Sebastien Ogier and Sebastien Loeb handle similar situations much better – they will admit they don’t need to push, but they’ll quickly follow it by “but we need to push and stay focused because that’s the only way to avoid mistakes” or “this is rally, you need to push and be ready for anything”. See the difference in tone? And I am writing all this not just based on my impressions but based on tweets and comments from other people, questioning Jari-Matti’s public surrender. It’s similar to how drivers will NEVER say stage was easy to drive, ever.

Make no mistake, I WANT Jari-Matti Latvala to become an effective Ogier’s Ogier this year and it seems he will, but just iron out some of those statements. We want to hear the fighting, clever Jari-Matti Latvala, capable of putting his well known speed to killer use. Something tells me we will see a different beast in Sweden. 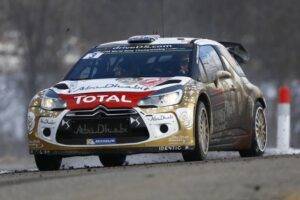 Back on 2015 Rallye Monte Carlo. Whoa, what a day again. We’ve had spins, offs, returns and some stunning drives. The saddest part was losing the first stage of the day, I hate when that happens because thousands of fans got screwed up maybe due to actions of the few or organizers making the wrong choices. It is horrible when stages get cancelled and you are left disappointed, but it would be even more horrible to run a stage in such circumstances and risking a much bigger problem. Rallye Monte Carlo must keep working hard to keep the itinerary realistic with regards to growing popularity of the sport.

Driver of the day, for me, is Robert Kubica, no doubt. Kris Meeke produced some fine drives today as well, but Kubica was consistent and convincing, tyre choices or reserved drives by others or not. That guy’s progress is stunning and impressive and I am really looking forward to the rest of the year.

Tomorrow we have three stages on the menu. One of those is legendary climb over Col de Turini, but this one won’t be televised live. But that’s another story and one we’ve been through too many times already. I am keeping my right foot on the positive pedal still, flat out.