It’s Time For the WRC To Return To Ireland

No, dear friends and followers, guest authors are not taking away this blog from my still warm and not dead yet hands – it really is just a coincidence that two guest posts arrived to WRB’s mailbox so close together. Now, since this is supposed to be some kind of a disclaimer, I am going to say that opinions stated below belong to Jason Anthony, another soul desperately in love with WRC and rallying. As an American fan of rallying, what do you do to satisfy your hunger for the sport? According to Jason, you travel to Ireland, only to turn from fan to fanatic almost instantly. Read on, you’ll see for yourself. Also, WRB is in no way affiliated with the Certain German Brand dealership, so eloquently pictured in the photo above. 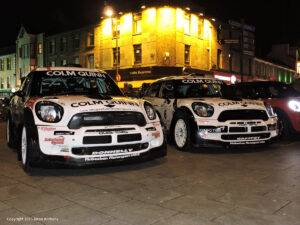 Do yourself a favor, if you have the time and the money, take a weekend holiday to Ireland to witness the greatness that is the Irish Tarmac Championship. What you will find is the next best thing to attending a WRC event… OK, I’ll say it… maybe even better than a WRC event. I just spent a weekend listening to the sounds of WRC cars, both past and present echoing across the hills and fields of County Galway, Ireland, and I am smitten. OK, maybe I’m just an American who has never had the chance to witness a WRC car at full chat until now, but there is something more to it than that. It is widely accepted that Scandinavia is the spiritual home of rallying, alright, hard to argue with that. However, what I found in Ireland this weekend was a passion for rally as strong as what we see in Finland and Sweden. When it comes to rallying perfection, Ireland comes close. It has all the ingredients: fantastic roads, unpredictable weather, top-class cars, and a passionate fan-base. Do you remember back in 2007 when the WRC first went to Ireland? The crowds on those stages rivaled the numbers seen for the Monte. This country lives and breathes rallying, and it deserves to have it’s WRC event back.

While waiting for the stages to start, I took the opportunity to mingle with the other spectators and find out just what it is about rallying that Ireland loves so much. I heard a lot of different answers, but they all seemed to point to the same theme, these people grew up with rallying. For some, their homes sat right along the stage roads. For others, their family members scraped enough together to field an entry in the national championship. They grew up driving around on these muddy country lanes, and rallying became a natural expression of this. When I looked around, I saw all ages out on the stages this weekend, young families with their kids, teenagers, and even elderly couples. But as we stood on that thorny, rambling rock wall in the early morning mist, we all shared the same nervous, excited energy as we waited for that first car to come into view. 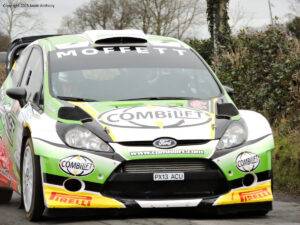 The first thing I hear is a few pops and bangs drifting through the cold, misty air. I can barely hear them over the sounds of the cows and sheep in the field behind me. Then, faintly, the engine noise appears… then builds. As a WRC spec Subaru blasts into view over the crest, the rev-limiter activates. In a flash, it blows by, leaving in it’s wake the scent of burnt clutch and brakes. As I am reviewing my shots on my camera, the next car roars by, and then the next! One after the other, a fleet of WRC cars fly past at full tilt. Ireland has more ex-WRC cars registered than any other national rally championship. But it’s not just WRC cars, there are S2000’s, R5’s, Group N’s, and a hoard of MK2 Escorts. I found out later that in Ireland the cars run at 30 second intervals because they have so many entries. No where else will you find these numbers and varieties of rally cars on the stages.

And then there are the roads! On the Irish tarmac, you will find stages as tight and twisty as Corsica, with flat out sections as fast as Finland, and changing grip levels as challenging as Monte Carlo. Throw in the unpredictable and rainy weather of Wales Rally GB, and you can maybe begin to understand what the Irish crews are up against. After the first leg of WRC Rally Ireland back in 2007, all the drivers, including Seb Loeb himself said these were the most difficult stages they have ever encountered in their careers!

I know that there are many factors that go into hosting a WRC event, and sometimes circumstances just don’t allow it to work out. We all just saw what happened to the Rally of France this year and the Monte just a few years ago. However, here’s to hoping that the influence of drivers like Kris Meeke and Craig Breen, coupled with the passion of the Irish fans will bring the WRC back to the wonderful muddy lanes of Ireland. In the meantime though, perhaps a quick jaunt over to the Emerald Isle to see the Tarmac Championship will satisfy your appetite for now!