Kubica’s 5 minute penalty and some questions around it

Robert Kubica enjoyed an eventful Rally Sweden, proving once again that the speed is here but also the new, 2015 spec, level of control and focus. He took risks, of course, because he thinks that is the best way to acquire knowledge. In Sweden he did not make any big mistakes, unlike many other drivers, but despite that he ended up outside of points.

There are two main reasons for this; on day 1 proper his Ford Fiesta RS WRC developed a transmission problem, so Kubica had to crawl through a set of stages with only front wheels spinning under command of his right foot. That costed him a lot of time and he finished the day in 22nd place overall, 7 and a half minutes behind the leader. 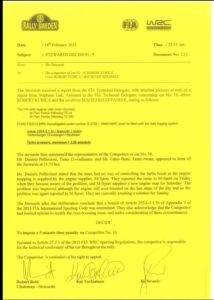 That still did not spell an outright tragedy and Kubica still could have hoped for a solid result, maybe even points, but at the end of 2nd day (Saturday), stewards issued the decision number 9 of 2015 Rally Sweden, which you can find if you click on the small image on the right side of this paragraph. Basically, Kubica received a 5 minute penalty for breaching an Article 255A-5.1.1b (2015 FIA Sporting Regulations, App. J), which defines the technical characteristics and operation of turbo chargers in WRC engines. Specifically, Kubica’s Fiesta exceeded maximum allowed turbo pressure, which is restricted at 2.5b absolute.

According to the steward’s decision, Kubica’s team noticed an issue with turbo and investigated with engine mapping supplier, M-Sport on Friday. They (the team) received new mapping but turbo again overboosted on Saturday, so Kubica’s team took the issue to M-Sport once again. This, however, did little for the stewards, who have decided to reach out for Article 27.2.1 of FIA WRC Sporting Regulations, quoting “The competitor is responsible for the technical conformity of his car throughout the rally”. Rightfully so.

Kubica’s car was clearly misbehaving and was in breach of rules and stewards had to act and act they did. However, I did not find any article or other explanation of the 5 minutes mark. Their decision also does not mention the amount of “over” in this overboost. If you read carefully (and I hope I interpreted the time-control names right), you can see Kubica’s turbo overboosted on two Karlstad supersprints, meaning 1.9 kilometer stages. Unless his turbo delivered over 9000 -insert favourite unit of pressure here- I don’t see how he could have benefited in the amount that is anywhere near 5 minute mark.

Let’s also not forget that Kubica drove almost entire second loop in Friday on FWD only – he lost 22 seconds on SS10 alone. Can’t say that turbo overboost did much to help his cause, can we?

I will try to reach M-Sport to get some perspective from their end and will report back my findings. In the meantime everyone using Fiestas should check their turbos for funky behaviour.

What I find interesting is how little, or let’s say none at all, alternative a competitor has in case he is faced with a similar situation. FIA’s rules are strict – if your car is breaching the rules, we’ll punish you, even though your engine mapping is supplied by 3rd party.

The only possibly outcomes of this are: a) accept the penalty and keep driving, for yourself, your team, fans and sponsors, or b) decide to withdraw from the event and make a PR mess of it for the engine mapping supplier, which in this case is M-Sport. This time I am happy Kubica opted for a), but what will happen if this issue reappears? In the end, what we also don’t know is could engine have had an issue that prompted the overboosts, regardless of changed mappings?

If I have misunderstood anything, please let me know in the comments below.