WRC, the biggest winner in Sweden

2015 Rally Sweden was a winner. After the traditionally spectacular Rallye Monte Carlo we turned to Sweden to provide a different challenge and Sweden delivered, but even though drivers, organizers and fans deserve praise for their efforts and dedication, for me the biggest winner in Sweden was the Championship itself. So many myths and doubts about the state of WRC were busted in Sweden and for the first time even the most dedicated critics and deniers had very little ammo for their weaponry. Metric tons of excitement were had from day 1 until the last meters of the final stage and we did not even need any extra spicing or artificial aromas, WRC and its participants provided the ingredients of highest quality. The end result was a feast of epic proportions.

How else would you describe the events on the final stage of the event? I picked this stage because it contained the final acts in this dramatic rally, but other stages were equally spectacular and thrilling. Without the splits being available to crews on stages we can finally enjoy stage end interviews with proper rally fighting jargon. Where once we would hear phrases like “safe to slow down” and “cruise to preserve car” we now had “we pushed like crazy” and “I took many big risks”. When you don’t know what you are fighting against, your natural instinct tells you to dig deep(er) and risk more – I bet many drivers were ecstatic when they realized their own hidden potential and speed. Sure more speed brings more risk, but hey, motor sports. Bigger risks are not all, though. Just ask Sebastien Ogier, who is usually calm, collected, somewhat whiny but otherwise mega cool guy. His reactions to wins can be compared to those of Sebastien Loeb – sometimes you think they’re not particularly amused by taking a win on some event. But 2015 Rally Sweden was much different for Sebastien Ogier blasted through the final stage and was ready to buy himself a beer just to congratulate himself on a fantastic drive, he was pumped up and you could see his adrenaline gauges firmly planted all the way up at 11 on the scale of 10. Our World Champion looked like he won his first ever rally or a stage. And when the news of Andreas Mikkelsen’s demise arrived, Ogier immediately switched into a different mood; punching the air, saying how proud and happy he was. This win did not just fell in to his lap, he worked his ass off to get it and when final confirmation arrived, Ogier could not help letting his emotion slip. There were no splits this time, this time it was up to him and Julien Ingrassia and they delivered in a spectacular fashion. 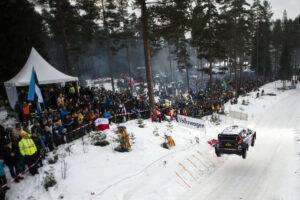 Then there is Andreas Mikkelsen’s dramatic mistake, robbing him of a chance to score his first ever WRC win. He kept his emotions in check for the first interviews at the stage finish, but it was impossible to act like it wasn’t a big deal for too long. Andreas invested so much in this event, maybe even more than Sebastien, and it is this investment that led to tears for one and pride for the other driver. These cars don’t drive themselves (yet) but there is much more behind just being fast and delivering results, all those hidden pressures and expectations. Mikkelsen had a wonderful opportunity in Sweden, but in rallying you would be a very big fool to rely just on luck or chance or statistics. For Andreas the biggest win will be a strong outing in Mexico, in a way that will be a much bigger thing for him. Sure, a win is a win, but I for one hate when drivers score a victory on a specialist event like Sweden and then struggle on other surfaces. Andreas can leave Sweden knowing he had the pace needed for victory – now it is finally time to allow this pace to grow and excel on gravel and tar as well.

Thierry Neuville had a fantastic rally in Sweden, it was a major step forward for him and the team. They are still not there yet and Thierry will be first to admit to big risks he had to take in order to keep his pace close to that of Volkswagen crews, but team is growing and improving. They have a rally winner driver in their ranks and Hyundai must try extra hard to keep the progress evident and effective. Their new car is not ready yet, but that should really not be an excuse and I am glad to hear (and sense) that team is not using that as one. There must be a constant push forward, old car or new, because that is the only way team will adopt the winning mentality and never give up attitude. The fact that Thierry was able to compete with other teams is an encouraging thing, but we want to see it repeated on a regular basis.

There were other moments in this event, too many to mention here, from Kris Meeke and Jari-Matti Latvala’s offs to Robert Kubica’s pace, but again, for me the biggest winner is the sport itself. WRC proved all the critics and doomsayers wrong and in a big way. The concept of the sport works – maybe we won’t have such close finishes on every event, but that is also good, because it will feel natural and unforced. By ensuring “exciting finishes” through shootout stages we would actually do the opposite, because artificial excitement quickly grows old and turns into a bad joke. But when the excitement is genuine and raw, then nothing really can compare.