Did Anyone Notice Hayden Paddon? No? That’s a Good Thing!

Last night, Hayden Paddon hosted a very informative Q&A session on Twitter, if you’ve missed, do a search for #askpaddon hash, plenty of great questions and equally great answers. Hayden really worked hard to get all questions answered, which is exactly what he did in Rally Sweden, with matching success. Here’s what WRB’s not-so-guest-anymore author Jason Anthony thinks about Hayden’s performance in Sweden. If you go almost unnoticed, is it really a sign of a job well done?

In my younger years, I used to play ice hockey as a goalkeeper. During one practice, my goaltending coach told me, “If no one notices what you are doing, you will know that you are playing the right way.” It took me a little time for me to figure out what he meant, but once I did, it dramatically changed the way I approached the game of hockey. If I was playing within myself, controlling my movements and positioning, shots would just hit me. I wouldn’t need to be diving all over the place making saves that looked spectacular. If I had to make a dramatic save that everyone watching noticed, it actually meant that I was compensating for a mistake that I made by trying too hard. 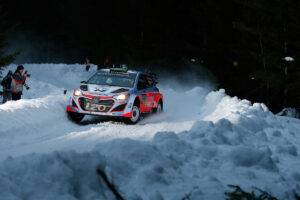 The same can be said for rallying. If you see drivers making spectacular slides, it usually means that they are trying too hard. Yes, it may look cool on the TV, but it almost always results in lost time, and usually an off road excursion. This brings me to the performance of Hayden Paddon this weekend. He did have one trip into the snow bank on Friday that cost him a bit of time, but other than that, he was flawless. No, he never bothered the top of the time sheets, but he also kept up a steady pace between the snow banks and stayed out of trouble. He never completed an individual stage quicker than 6th, but by the end of the rally, he had bagged 5th place and valuable points for Hyundai.

When watching the highlights, I kept an eye the time that he was covered. Of the 78 combined minutes of the three daily highlight shows, the cameras focused on Hayden for less than 2 minutes! However, even if it went unnoticed on the TV, what Hayden did this weekend was incredibly special. Remember that it was only a little over a week ago that he found out he would be taking Dani Sordo’s place in the top Hyundai team. In an instant, he was dropped into the spotlight with an opportunity to prove himself on the big stage. Many young drivers would have buckled under this kind of pressure. They would have tried too hard, pushing at the wrong moments, and making mistakes. What makes Hayden’s performance even more special is that he was using a car that was admittedly down on power compared to the 2015-spec cars. On top of that, the i20 that he was driving had been tested and set up around Dani Sordo’s liking. It is that kind of flexibility and composure under pressure that leads to a long career in the top level of rallying. No, you may not have noticed it on TV, but what Hayden accomplished this weekend was nothing short of spectacular. Keep an eye on this guy, he is going to be something special!