Have The #43 and #199 Ships Sailed for American Rallying?

What is the next most popular topic in the World Rally Championship related discussions, right after the future of technical regulations, the identity of Toyota’s drivers and the possibility of Sebastien Loeb making a few more strictly-one-off outings this year? Of course, it’s the rallying in the US, or rather, the prospects of this country joining the WRC calendar in near(er) future. This is a very complex topic, but it can also be very simple, if the ultimate goal is to: a) see rally grow as a sport in the US, b) US finally does return to WRC calendar. What you see below is what Jason Anthony considers a brief reply to a simple question I posed not long ago. I don’t think topic such as this could do with brief replies. Instead, here is a bit more detailed look at whats and whens regarding top level rallying and the US of A.

For some, the numbers 43 and 199 don’t mean much of anything at all. However, to US rallying enthusiasts, they are synonymous with two men who drastically changed the face of rally in the USA: Ken Block and Travis Pastrana. Before I go any further, this piece has more to do with the state of rallying in the USA than it does about Ken Block or Travis Pastrana. There is no doubting the exposure that these two men have brought to rallying in the USA. It was 10 years ago that their rallying careers began in a pair of Group N Subaru WRX’s run by Vermont SportsCar. At that time, Ken was an unknown quantity. He was just a guy who had some money to spend on rallying after building a successful shoe company. Back in 2005, all the buzz was about Travis Pastrana. His involvement in the sport brought rallying from an unknown grassroots sport into somewhat of a national spotlight. All of a sudden, rally racing became cool, an extreme sport alongside of skateboarding and BMX bikes. It was included in the X-games in 2006 where the final super-special stage was aired live on national network television. It was incredibly dramatic with none other than Colin McRae himself rolling on the penultimate corner.. As I watched this with my jaw wide open, I remember thinking to myself, “FINALLY!!! Rally has made it here in the States, the sky is the limit now!”

Naturally, Rally America, the major sanctioning body of stage rallying in the USA latched onto all of this exposure. Travis and Ken became the poster-boys of the championship. Subaru dealerships all over the States had their photos in their showrooms. At major US auto shows, their cars were displayed for all to see. Things seemed good for rallying in the USA. I would see kids on the street wearing #199 and #43 shirts. Entry lists swelled for rallies with many quality entries in the top class. People who had never heard of rallying just a few years ago were now hiking into the forests and deserts to witness these guys in action. It seemed like rallying in the States had finally gotten the “kick-start” that it needed.

Then came the phenomenon known as “Gymkhana”. Now, let me just put it out there… it’s COOL! There is no doubt about that. The first episode made by Ken Block had a relatively low production value, but it featured some pretty impressive footage of him drifting his Subaru around various objects in an abandoned industrial estate. The video became viral on YouTube, and soon, more episodes were made. Around this time, Travis made some headlines himself by jumping his Subaru onto a barge in the middle of a harbor. As cool as this stuff was, the link to true stage rallying became thinner and thinner. In addition, Ken and Travis began to enter rallies on only a part-time basis.

Fast-forward to 2015, 10 years after Travis and Ken started rallying. If I’m honest, I fear that proper stage rallying in the USA is beginning to drift back into obscurity. How could this have happened? Just a few years ago, things were looking so good! I believe there to be a few factors that brought US rallying to where it is today. First, there was the economic crisis of 2008-2009. Budgets became thin, sponsorships began to dry up, and the car counts for rallies began to dwindle. Other than the hardcore spectators, not many people were willing to trudge out into the woods to see only 3 or 4 top class cars go past. In addition, I wonder if Rally America, had put too many of their eggs into the “Travis and Ken basket”. While so much emphasis was placed on it’s two superstars, the other competitors received little of the lime-light. The fans who jumped on board the bandwagon continued to follow Travis and Ken in their other exploits, but forgot quickly about stage rallying. The growth of the Global Rallycross Championship (GRC) has only further pushed stage rallying onto the back burner. To their credit, the GRC brought the exciting sport of rallycross into large urban markets through very good marketing and promotion. Travis and Ken now compete full time in this championship in front of thousands of fans while Rally America can only muster a few hundred huddled along its stages. If you ask a kid on the street wearing a Ken Block shirt what rallying is, chances are he’ll tell you it is a bunch of cars beating the crap out of each other on a rallycross track. That is what rallying in the USA has become. 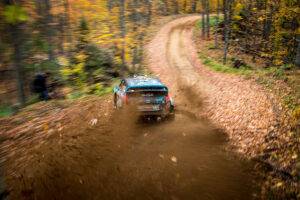 So what now? What needs to happen to bring a resurgence to stage rallying in the USA? I’m afraid for Rally America that the #43 and #199 ships may have sailed. Yes, Ken and Travis still drive rally-spec Subaru WRX’s in the GRC, but there is little to no mention in the national TV broadcasts that stage rallying was the inspiration for Rallycross. In addition, as cool as the Gymkhana videos are, at this point, they have little to no application to true rallying. Take for example Ken Block’s new car pictured at the top of this page. Is it cool? Yes, very! Does it have anything to do with rallying? Not really at all. I believe that first and foremost, Rally America needs to redefine their identity without leaning on the marketing crutch of Ken Block and Travis Pastrana. There are other fantastic drivers and teams in the championship that very few have heard of, and they deserve some exposure.

Secondly, I think that in order for rallying to succeed in the USA, it needs to cater to the American audience. No matter how cool I may think the current WRC and R5 cars are, they are never going to capture the imagination of most Americans, even Americans who follow motorsport. Maybe Rally America needs to have something like Ken Block’s new Gymkhana car. Can you imagine seeing that thing blasting through a forest stage? It might not be as quick as a current spec WRC car, but I know that it would turn some heads! Seeing stuff like that is what is going to get people back out to the stages. The cars need to be emotive; they need to inspire a reaction. No one is going to come out to see a bunch of old Dodge Neon’s and Eagle Talon’s. Even as a die-hard rally fan, over the past few years, I have become a bit bored with the cars in the national championship. I know that it is easier said than done, but getting some more interesting machinery out on the stages would make a big difference.

Lastly, US stage rallying needs to take a page out of sports car racing’s book when it comes to recruitment and support of privateers. All across the world, the grids of various national and international sports car championships are full of so-called “gentleman drivers.” These individuals are amateurs who happen to be fortunate enough to have the ability to pour vast amounts of money into motorsport as their hobby. Sports car racing has benefited greatly by listening and responding to the desires of this demographic. Capturing the imaginations of such individuals and cultivating their interest in the sport could be a key to success for rallying. Ken Block is a perfect example of how a guy with an interest in rally and a bunch of extra money can bring the sport huge amounts of exposure. There is one caveat to this strategy, however. Rallying cannot become so consumed with appeasing the gentleman driver demographic that smaller, family-run teams get left behind. These teams have always been the heart and soul of rallying, and they should never be marginalized in favor of the wealthier individuals and teams.

So, what’s next for American rallying? The future still holds a lot of promise. The stages in the USA are some of the best in the world, and as the Ken Block and Travis Pastrana era proved, there is an audience out there that is interested in rallying. The hard work comes in capturing the attention and imagination of this audience enough to get them back out to the stages. In addition, Subaru has stayed faithful to the championship by continuing to enter a factory-prepared WRX driven by David Higgins. These are all positives that the championship can use as a foothold to grow and develop. However, I think that in order for proper stage rallying to continue to grow in the USA, Rally America needs to look past the glory days of #43 and #199 to find new and creative ways to promote the championship.